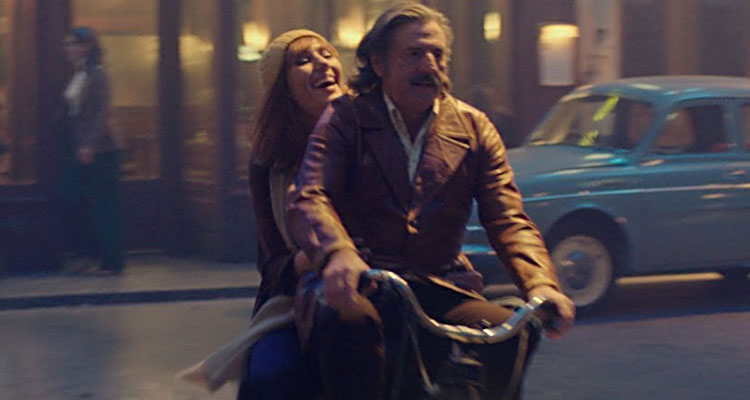 In short: Back To The Past

The Plot: Aging Victor (Daniel Auteuil) is a man who likes to reminisce about his past. A former cartoonist for a newspaper, his profession involved flights of fancy but has now been overtaken by modernity and the move to online publication. His wife Marianne (Fanny Ardant) has grown distant from him, to the point where she is carrying on an affair. This is where Antoine (Guillaume Canet) comes in. He runs a theatrical service which recreates scenes from a client’s past down to every possible detail. Owing Victor a favour, Antoine recreates a set for a particular day in Lyons, 1974. The day that Victor first met the forthright Marianne and became enchanted with her. The actor playing her, Margot (Doria Tillier), has fun with the role, discovering more about Victor in the process and wondering what happened to Marianne to make her so different now…

The Verdict: If, as Shakespeare once said, the future is the undiscovered country then the past could be considered the country that can be re-discovered time and time again. That’s the high-concept premise behind the utterly charming and delightful French film La Belle Epoque. Writer/director Nicolas Bedos has constructed his ingenious film around the idea that the past is viewed through rose-tinted glasses and can be replayed to a man who no longer seems interested in living in the present. Think Michael Crichton’s Westworld combined with Philip K. Dick’s We Can Remember It For You Wholesale (AKA Total Recall) and then given a whimsical French spin and you’re on the right track. The emphasis here is more on character rather than robots or implanted memories though. That’s about as high concept as it goes.

Bedos’ script is a beautifully-drawn character study of Victor, a man who has lost both emotional and physical contact with his wife. The fire that was within her as a young woman is no longer there, the weary years of aging taking their toll. Victor spends several days hanging out in La Belle Epoque, the reconstructed Lyons cafe where he first encountered her as the actors play out several scenes from Victor’s youth while he interacts with them. Sometimes he corrects the actors, sometimes they break character, sometimes he just sits back and enjoys re-living the past when he first met Marianne and fell in love with her. Antoine and his team watch on, though Antoine who is in an on-off relationship with Margot wonders if she is not acting anymore as she too becomes drawn to Victor.

It all sounds very Charlie Kaufman. Eternal Sunshine Of The Spotless Mind is an obvious reference point here, the idea of memory being a fragile thing that can be lost or erased over time. Bedos puts his own spin on it though, making his story more about people changing over time and losing something in the process. The casting of his characters with the right actors (and vice versa, in the case of Antoine’s company) is of particular note. Veteran French actor Auteuil is an ideal choice for the Walter Mitty-type Victor, his gentle persona and bemusement at what unfolds is etched on his weathered but engaging features. Ardant likewise is radiant but a bit burnt-out, a contrast to her younger, more vivacious self in an eye-catching performance by Tillier.

La Belle Epoque is lighter and funnier than it initially appears. There’s a warmly comfortable sense of the past and the present co-existing at the same time, while also having the necessary character depth to make its whimsy relevant to the story. It’s accessible and consistently entertaining, without the pretentious aspect that sometimes bedevils French cinema. With the backing of 20th Century Fox and Pathe, it wouldn’t be a stretch of the imagination to see it getting a Hollywood remake (presumably starring George Clooney). Forget the future. This trip Back To The Past is a cosy, feel-good treat.