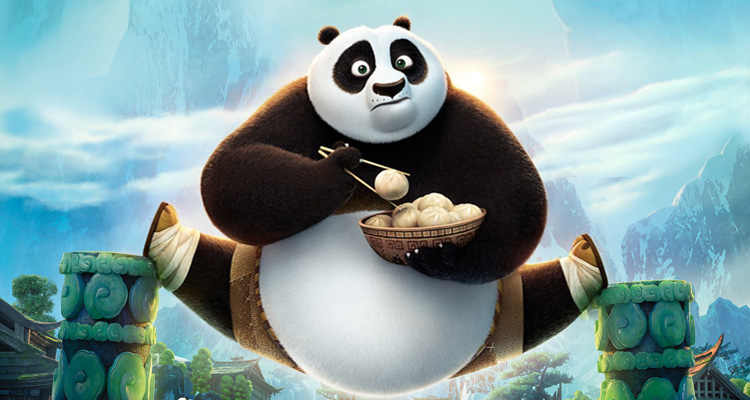 KUNG FU PANDA 3 (USA/China/PG/95mins)
Directed by Alessandro Carloni, Jennifer Yuh. Starring the voices of Jack Black, Dustin Hoffman, Bryan Cranston, Angelina Jolie, J.K. Simmons, Jackie Chan, Seth Rogen, Lucy Liu, David Cross, Kate Hudson, James Hong.
THE PLOT: Facing the task of picking up where his old master (Hoffman) left off, Po (Black) must teach his motley crew of kung fu cats – Jolie’s Tigress, Chan’s Monkey, Rogen’s Mantis, Cross’ Crane and Liu’s Viper – the fine art of kicking the crap out of people whilst remaining calm and centred inside. If that weren’t enough for Po to be getting on with, his estranged father, Li (Cranston), suddenly turns up. Only trouble is, Po has an adopted father, Mr Ping (Hong), and, naturally, his beak is bent out of shape.
Oh, and then then the real baddie, Kai (Simmons), shows up. Just to throw some kung fu crazy into the family soap opera…
THE VERDICT: One of those rare beasts, being a sequel to a sequel, and a DreamWorks Animation franchise to boot, but actually rockin’, ‘Kung Fu Panda 3’ is surprisingly good.
Surprisingly because an overweight panda who does martial arts is a one-joke concept, and yet, thanks to one smart script, and a cast largely made up of highly grateful former box-office champs, this is one fun movie.
And it looks great too.
Not that everyone here should give us anything less than damn good, Yu and Carloni having been involved in the franchise from the very start. This is no ‘Ice Age’ flog though, and ‘Kung Fu Panda 3’ is no slog to watch either, the jokes coming just as fast as the tidy, top-of-the-range animation.
Or maybe I’m just getting soft in my old age…?
RATING: 4/5
Review by Paul Byrne