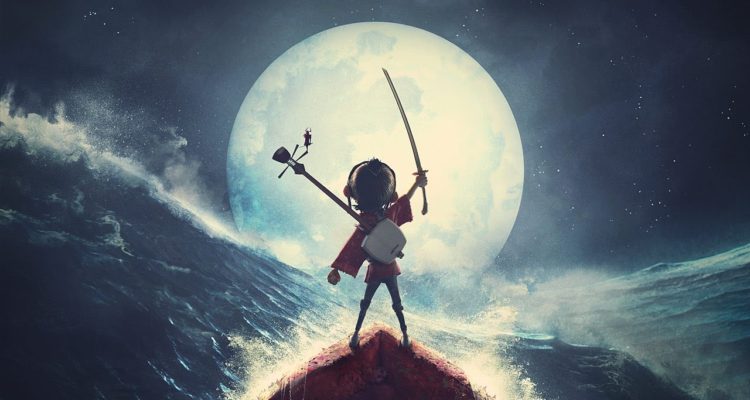 Kubo and the Two Strings

KUBO AND THE TWO STRINGS (USA/PG/101mins)
Directed by Travis Knight. Starring Charlize Theron, Matthew McConnaughey, Art Parkinson, George Takei, Ralph Fiennes.
THE PLOT: Kubo (Art Parkinson) spends his days making magical origami figures tell stories for the people in a nearby village, and his evenings caring for his mother, who is becoming increasingly distant. When he stays out after dark one night, however, Kubo is visited by his mother’s sinister sisters (Rooney Mara), who tell him that his grandfather stole one of his eyes, and has been searching for him for many years, in order to steal the other. Kubo suddenly realises that the stories he has told all his life are in fact true and, with the help of Monkey (Charlize Theron) and Beetle (Matthew McConaughey) sets out to find a magical suit of armour to destroy his evil aunts and grandfather once and for all.
THE VERDICT: Brought to us by Laika, the studio behind ‘Coraline’, ‘ParaNorman’ and ‘The Boxtrolls’, ‘Kubo and the Two Strings’ is a beautifully animated stop motion film, that blends together Japanese legend with cinematic adventure, to tell a wonderful tale.
The voice cast of ‘Kubo and the Two Strings’ is filled with familiar voices, including Charlize Theron, Rooney Mara, George Takei, Ralph Fiennes, Art Parkinson and Matthew McConaughey in his first animated film. All of the cast do well with their characters, making them warm and caring, sinister and scary, and generally believable on all fronts.
The screenplay, written by Marc Haimes and Chris Butler brings together Japanese myth and legend to tell a compelling tale. There are time when plot twists are obvious, but this does not detract from the warmth and fun to be had with the film. Where the story falls down, however, is in the final moments, when characters lie to others in ways that seem out of their nature, and the entire film comes to a galloping, and rather too sweet halt. Aside from this however, ‘Kubo and the Two Strings’ is a fun adventure and mystery tale that is woven together well on screen.
As director Travis Knight, co-founder of Laika, making his directorial debut, obviously has fun with ‘Kubo and the Two Strings’, and the action adventure parts of the film are a particular joy to watch. There are moments that are snatched away too soon for the audience to feel completely satisfied – and, as mentioned, the finale feels a little out of place – but the voice work is strong and the film is a visual delight.
In all, ‘Kubo and the Two Strings’ is a film that will delight adults and kids alike with its clever storytelling, magical adventures and strong message about those who love us never truly going away. This final element does become problematic however, especially in the closing moments of the film.
RATING: 4/5
Review by Brogen Hayes