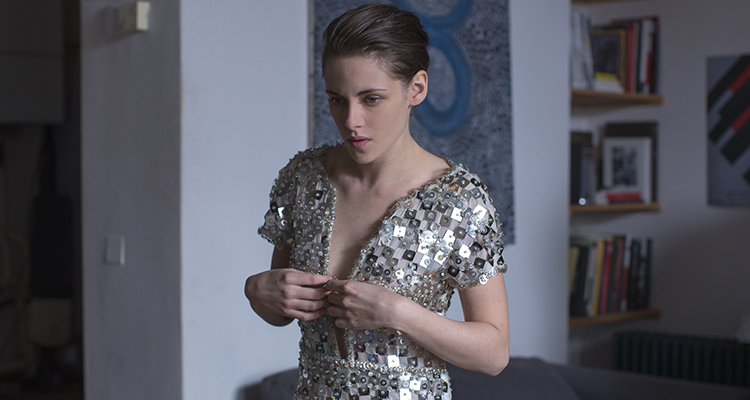 Kristen Stewart is having quite the year. As well as starring in Woody Allen’s latest film ‘Café Society’, this week the actress reunites with ‘Clouds of Sils Maria’ director Olivier Assayas for ‘Personal Shopper’. The film follows Maureen (Stewart) a young woman who works as a stylist and shopper for Kyra (Nora von Waldstätten), a young actress in Paris. As she works to pull someone else’s life together, her own begins to fall apart when she gets mysterious text messages from an unknown source, as she tries to make contact with her late brother from beyond the veil.

Movies.ie caught up with Stewart at the Cannes press conference for ‘Personal Shopper’ to find out more about this beautiful and odd horror movie.

Could you relate to Maureen in the way that you have people who do things for you that you simply cannot due to a lack of normalcy?
KS: To be on the other side of that, to feel so incapable; you can’t go to the store – I mean, technically, you can, it just could prove to be logistically not worth it. Maureen is so capable. She’s incredibly tactile and she’s incredibly physical, so it was fun to play somebody who is just capable. Sometimes I do feel a little bit like I have had my limbs cut off, and that’s not to say that that’s a bad feeling, it’s just surreal.

This is your second movie with Olivier Assayas after ‘Clouds of Sils Maria’. What is it that makes you like working with him?
KS: We don’t talk to each other a whole lot; he never answers my questions. There is a communication that is undeniable, and there is a light, there is a flame that he lights under mine ass that is stronger than I have ever felt. I truly try to navigate my career by feel, and I just feel him. The idea that he can be the catalyst of a thought process and really allow me to have it, and he really lets it be mine, is a really good feeling. You feel like you are creating something with someone, rather than satisfying someone. As much as I really am driven to satisfy, I really feel like a part of it, and it’s a different version of the job. I like both, but this is my favourite. I have never felt it stronger.

There is a lot of text messaging and looking at iPhones in ‘Personal Shopper’, what is your link with technology?
KS: It’s weird how you can engage with something that does not exist, and absolutely project everything onto a simple bit of punctuation. I have been thinking about distractions a lot lately, I’m absolutely guilty of constant stimuli that’s not actually stimulating at all, it’s like your brain is firing and it has carved out a pathway and it keeps falling into that one pathway. [There’s] something gratifying about the phone, because I definitely fall into that too, but it’s tricky because within the context of the movie my character is utterly alone and can’t talk to anyone. The fact that she can sit behind this phone and feel closer to feeling alive or something, it definitely says a lot about how we engage with each other and conversely, technology. It’s a little terrifying because it would be a lot easier for me to sit down and write you an email about what I am talking about right now.

As the lead of this movie, would you say it’s easier for you to prepare for a role like this if you believe that there is something on the other side of death or easier if you don’t?
KS: Without any religious implication, I’m fairly agnostic on this. I genuinely don’t know, but I’m really sensitive to energies and I truly believe that I am driven by something that I can’t really define so I can’t really take responsibility for it, and it gives me a feeling that we are not so alone. In this case, I think to fall into the ambiguity of that actually provides a thought process that is interesting for about five minutes, then if you over think it, it’s actually so debilitating. That’s why this movie is scary. It’s a ghost story, sure, but the supernatural aspects of it just lead you to the very base questions. Living in this sort of grey area allows for people to become closer to one another and not feel like when you lay your head down on your pillow at night that you’re going to tailspin into oblivion because those questions cannot be answered. Do I believe in ghosts? I dunno! I guess I believe in something.

Did you watch any ghost films to research the role?
KS: I didn’t prepare for this movie at all. I read the script once, and I wanted to discover it every single day so I tried to forget it immediately. So no references or ghosty things. When I was little that is what I was most genuinely afraid of though; I wasn’t afraid of people breaking into my house or monsters. I would genuinely sit up at night and be like “Who’s in here?” so it’s genuinely coming from somewhere pretty real.

You spend a lot of the film running around Paris, and even heading to London on the Eurostar. Was the shoot exhausting?
KS: Yeah. I did ‘Café Society’ before this, and [Olivier] really wanted to accelerate the making of this movie and go before Woody, and I was like “I simply can’t. If I do the job right I will be decimated and levelled, and not light and fun and pretty for the Woody movie”. The exhilaration though; it’s very reassuring. This movie made me feel like there was nothing I could put myself through that would actually make me not be able to keep going. Which is a really, really, really good feeling. I was working seven day weeks; I was working for Chanel at the same time. Sixteen hour days, seven day weeks, genuinely, and oh man I have never felt so good feeling so bad!

‘Personal Shopper’ is released in Irish cinemas on March 17th 2017. Watch the trailer below…