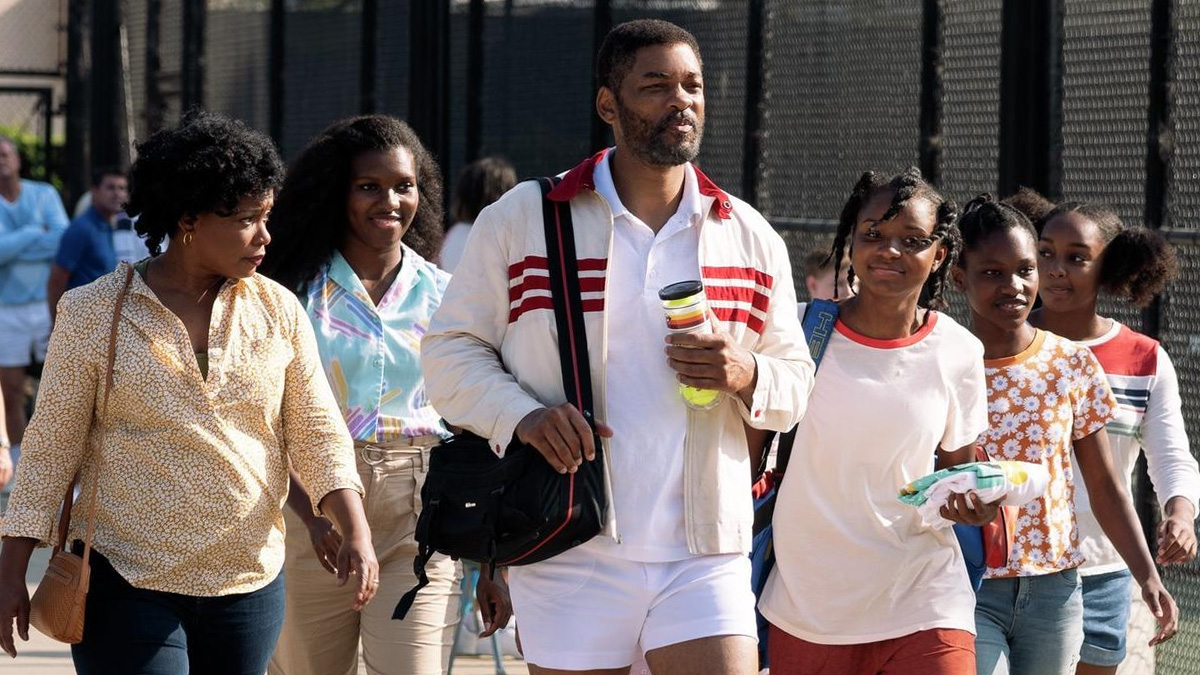 Based on a true story, ‘King Richard’ is a biopic about the rise of living tennis legends, Venus and Serena Williams and the lengths their father Richard went in order to foster their remarkable talent, despite him knowing absolutely nothing about tennis. We were lucky enough to attend an online press conference where the cast and crew and people involved in the film let us in on some behind the scenes secrets.

First up the film’s star Will Smith revealed that he was inspired to play the title character after seeing a real life interview on TV,  “There was an interview that Venus did when she was 13 or 14. Richard Williams snapped on the reporter, and the look on Venus’s face burned in my heart because that’s how I wanted my daughter to look when I showed up”. revealed Smith.  “That interview changed my parenting at that time. The look on Venus’s face was like she had a lion. She was so confident and so comfortable that her lion wasn’t gonna let anything happen to her. I fell in love with Richard Williams. That was 20 something years ago. And when the opportunity to be a part of this came up, that was the first thing that I remembered. I knew I wanted to show a father protecting a daughter like that”.

Continuing the family discussion, tennis star Venus Williams shared how surreal it was seeing her family life playing out on screen, “Every time I watch it, my eyes are water. It was amazing to see the family atmosphere on the set; Saniyya and Demi acted like Serena, not just when the cameras were rolling. They would hold hands, and it was so sweet. I’m really proud of what everyone has accomplished. It’s pretty surreal, to be honest. They really understood our family and portrayed us in a way that was really us. I’m very proud of that. Every single person sitting here worked so hard to make this a reality. They really cared about telling a story that was authentic, and not just one that was a scripted formula”. Her sister Serina agreed how surreal the experience was “Honestly, no word describes it better than just surreal, you know, just to see these incredible actresses and everyone behind it. To have Will [Smith] play my father and the way he just embodied Richard Williams just took the whole film to a whole new level. It’s so emotional. It’s a brilliant piece of work”.

The film is a welcome chance for audiences to see the two sporting legends on the big screen and one that will introduce the role models to a whole new generation. Venus is excited at the message that young girls will take away from the story admitting “Anything is possible. Always believe in yourself, never doubt. Doubt does nothing for you. The time you spend doubting you can spend believing in you and putting the work in. And as a family, you can achieve anything. That’s what I really loved about this is that it’s a family film. If you don’t understand tennis, you understand family and that with a family, you can do anything. Some of us are born with a family. Some of us have to create those families, but surrounding yourself with family can take you higher”.  Her sister Serena added, “You really do have to believe in yourself, and anything is possible. If you set your goals at the sky, the sky is literally the limit. So don’t be afraid to set high goals”.

Finally, Will Smith shared his thoughts on his co-stars Saniyya Sidney and Demi Singleton, who had to learn how to play tennis for the film, comparing their challenge and training to that of his boxing training for 2001’s ‘Ali’. “They had to learn to play like two of the greatest tennis players of all time. When I had to try to learn how to play Muhammad Ali, I know how daunting that was. There are professional fighters who can’t move like Muhammad Ali. There are professional tennis players that can’t play like Venus and Serena. I just want the world to know that not only did Saniyya learn how to play, like Venus, but Saniyya is left-handed. She learned how to play like one of the greatest tennis players of all time with her off-hand. When I step on a set like that, I take it as it’s my responsibility. It’s my family. It’s my crew. It’s my people. It was a beautiful honour and an absolute pleasure to bring this depiction to the world. So, thank you, Venus, and Serena, for your hard work and thank you for your inspiration to the world”.

KING RICHARD is at Irish cinemas from November 19th