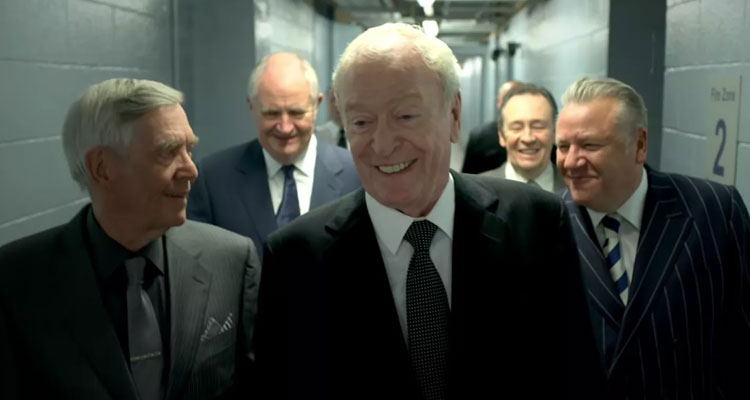 The Plot: Former career criminal Brian (Michael Caine) is mourning the loss of his wife. He keeps company with Basil (Charlie Cox), a young man who wants to follow in his footsteps. Brian thinks back on the good old days when knocking off banks and jewellery shops was a laugh. With Basil’s help, he hatches a plan to steal jewellery, cash and other valuables from a Hatton Garden safety deposit establishment in London. He puts together the rest of the team including Terry (Jim Broadbent), Danny (Ray Winstone) and Ken (Tom Courtenay) and over a quiet Easter weekend they case the joint and attempt a burglary. But afterwards, it appears that there’s no honour among thieves…

The Verdict: Already the subject of another film (the little-seen The Hatton Garden Job), the Hatton Garden burglary in April 2015 caused headlines not just because of the amount stolen but also because it involved a bunch of pensioners. Not exactly in their prime, they still had the audacity to carry it off. King Of Thieves is the starrier, more high profile version fronted by a sour Michael Caine swearing like a trooper (the film’s best moments) and threatening one of his crew with colourful phrases like ‘I’ll have you in chunks’. It also has the added talent of director James Marsh, re-telling a true story for the second time this year after The Mercy. The end result though is so-so, relying too much on its cast to sell it.

Given his documentary background with his Oscar-winner Man On Wire, one would expect King Of Thieves to be a more robust affair from Marsh. Not so, as it’s rather loosely structured. The main plot kicks in fairly quickly, skipping over Brian’s relationship with his late wife (a blink-and- –you’ll-miss-her Francesca Annis, sorely under-used). Some cursory time is spent establishing basic character quirks (Ken is partially deaf and prone to nodding off, Terry might be a psycho) before moving on to the main event. Marsh fails to inject any urgency into the burglary itself, so there’s little momentum in building suspense. The most you get is a security guard nosing around for a minute.

The third act is something of a let-down too. Just when it looks like the film might really get going, Marsh squanders it for occasional flashes of geriatric humour. There are only so many times you can get away with incontinence gags. Given that the real guys were hardened criminals, Marsh takes a lighter, less fussy approach. That’s fine for what it is, but one would expect more from Marsh. He relies heavily on his experienced cast to prop the film up and they duly do so. It’s entertaining watching them have a go at each other, but they’re all under-served by Joe Penhall’s half-baked script. They deserve better than this – and so does the audience. King Of Thieves might look like a breezy affair, but it’s mediocre at best. A geezer con job, so to speak, which ends up leaving you short-changed.