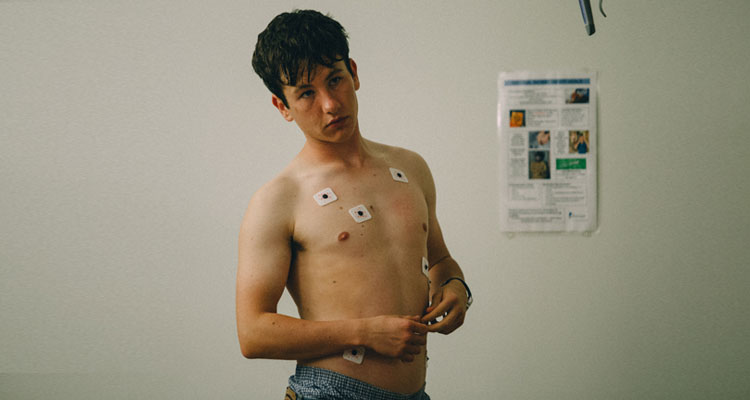 The Killing of a Sacred Deer

THE KILLING OF A SACRED DEER (UK/Ireland / 16 / 120 mins)
Directed by Yorgos Lanthimos. Starring Colin Farrell, Nicole Kidman, Barry Keoghan, Raffey Cassidy, Sonny Suljic, Alicia Silverstone.
THE PLOT: Eminent heart surgeon Steven (Colin Farrell) seems to have it all – a beautiful wife in Anna (Nicole Kidman), two happy if somewhat precocious kids in Kim (Raffey Cassidy) and Bob (Sonny Suljic) and a peaceful house to live in. What he hasn’t told his family about is his friendship with intense teenager Martin (Barry Keoghan), the son of a patient of his who died on the operating table. Steven takes Martin under his wing, acting as a father figure for him. However, that turns to latent obsession when Martin’s behaviour becomes increasingly focused on Steven’s family…
THE VERDICT: Are you sitting uncomfortably? Good. That’s where offbeat Greek director Yorgos Lanthimos wants you to be. For ‘The Killing Of A Sacred Deer’ is a tightly wound psychological drama that invokes dread and an impending sense of familial disaster. With a title taken from the ending of a Greek tragedy by Euripedes, playing happy families isn’t going to be on the cards here. But if you’ve been following Lanthimos’ work so far, from his homegrown films like the disturbing Dogtooth to his eccentric English language debut, ‘The Lobster’, then you’ll know what to expect here.
If anything, ‘The Killing Of A Sacred Deer’ is his most accessible film yet. Though, accessible is a confined definition here. It’s accessible in the sense that it’s slightly more palatable and more direct in approach than his earlier films. It’s not quite mainstream, but not that far off from it. Re-uniting with Farrell and Irish production outfit Element Pictures once again, Lanthimos has set his story in America this time but maintained Farrell’s native accent. The story is a slow-burner, but that time is well spent. The strange relationship between Steven and Martin is delineated clearly early on, with Martin even encouraging his mother (Alicia Silverstone) to make a pass at Steven. Destroying Steven’s home life hadn’t even entered his mind. Martin has other plans, insinuating himself into Steven’s family.
There’s an undercurrent of tension running throughout the film, as if everyone was one bad day away from a breakdown. That is, everyone except the calmly cool Martin. Young Irish actor Keoghan has been working steadily for a few years now, but his solid screen presence and ability to invoke both sympathy and uncertainty here, and in Dunkirk recently, has marked him out as a name to watch. He’s clearly been studying the older Irish actors he’s been working with and there’s a touch of both Cillian Murphy and Farrell in him. Speaking of which, Farrell dials down his performance here, skilfully portraying a man about to snap.
It doesn’t entirely work though. Lanthimos’ detached style of filmmaking – indifferently observing the characters from a slight remove rather than up close – can be offputting at times (is everyone except Martin in a vague coma?). He also encourages his actors to mechanically deliver line readings at times, which only adds to the icy atmosphere. He doesn’t quite manage to turn the screws fully on his characters either, at least not in the same way that Michael Haneke does. ‘The Killing Of A Sacred Deer’ is still worth seeking out though for being unsettling viewing and for a star-making turn from Keoghan.
RATING: 3.5 / 5
Review by Gareth O’Connor