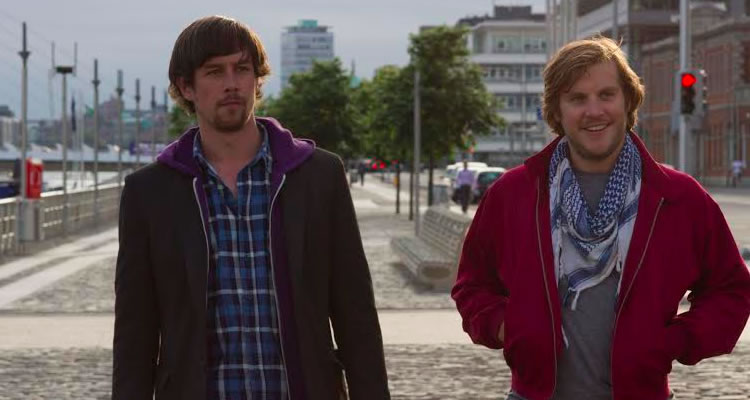 GET UP AND GO – the new film from the director of TONIGHT IS CANCELLED – is released in Irish cinemas this month. The film, shot in Dublin, examines the friendship between two twenty-something men, as they reach the time in their lives where they must move forward with their lives, no matter how frightening the prospect.

Movies.ie caught up with the stars of the film, Peter Coonan and Killian Scott, to find out more about the film…

What drew you to the film?
Peter Coonan: Brendan [Grant] had just a really, really interesting and refreshing way of auditioning people; giving you a clear intention in the scene. You went into the scene, where you are being fired and you have to whatever you can to change that person’s mind, and the other person was given the intention of not letting you leave with your job. That was something for me, as an actor that was helpful. The way he wanted to work was, before the film, doing improvisations of scenes that preceded the film itself. Then of course, to work with Killian. We worked on LOVE/HATE, but we had very few scenes together.
Killian Scott: Much the same for me, I responded a lot to Brendan as a director. I thought the process was something that really appealed to me, and the way that I like to go about acting. I just thought he had a real honest sensitivity and would be able to provoke the performance that we needed to find. To work with Pete, obviously was something I was really excited about, because we didn’t really have a lot of time on LOVE/HATE together; we didn’t share the screen that much, and whenever we did it was normally in a state of conflict, so to actually play very close friends over a very challenging 24 hours in Dublin was something that really appealed to me. Also, to shoot in Dublin, and to be in the city. It was cool.

The film has a very lo-fi, understated feel, was it a challenge to create this on screen?
KS: As a tone, it’s got a very gentle quality to it, but you are not as aware of those things when you’re performing.
PC: I think the whole world that Brendan was creating, and the whole atmosphere that he created with the rehearsals and the shoot itself, it was that idea of it being very real and the scenarios being every day events. It wasn’t hard to keep that going, because I don’t think it was ever in our minds that we had to keep it going.
KS: You commit to every scene as it comes, and that’s not something I would ever consider – what is the overall tone of this?

Director Brendan Grant has said that he mined the story from his own experience and that of his friends. Did you bring any of yourselves to your characters?
KS: 100% for me. The way I look at acting is that every character is some mining of personal experience, no matter how extreme the character is. You’re always using things that you have experience. I think one of the things that I liked about the film, I felt that there was lots of myself I could express, that I hadn’t had the opportunity to before.
PC: I think it’s nearly impossible to not bring some of yourself into it, even if you’re trying not to, it will eventually come into play.

What do you hope audiences take from this film?
PC: A sense of Dublin, and a time… It’s very much a moment in time film, in that it represents a coming of age in a certain way.
KS: Two characters are forced to mature very quickly.
PC: it’s the idea that we all have, of what do you have to change or do to actually give yourself the opportunity to succeed. It’s a lovely film…
KS: Hopefully people can relate to it, and see something in the characters and the experiences they are having…
PC: That they can relate to.
What’s next for both of you?
KS: I have two films coming out later this year. One is an Irish and English co-production, called TRADERS, which is myself and John Bradley, who plays Sam in GAME OF THRONES. Then there’s a film I did in England called TRESSPASS AGAINST US.
PC: I have a play [called] BEFORE MONSTERS WERE MADE.

WATCH THE GET UP & GO TRAILER