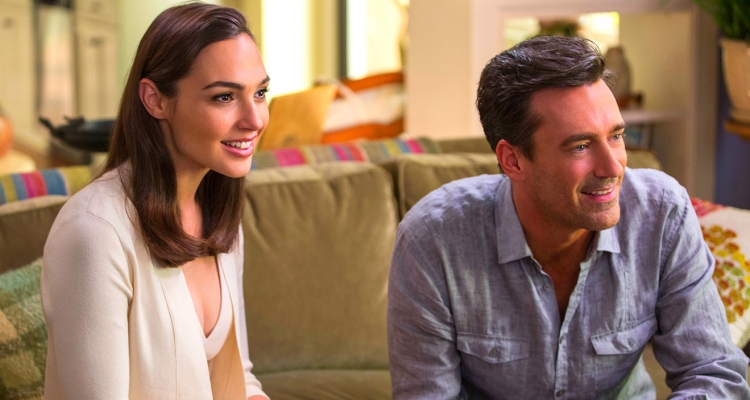 Keeping up with the Joneses

KEEPING UP WITH THE JONESES (USA/12A/101mins)
Directed by Greg Mottola. Starring Gal Gadot, Jon Hamm, Isla Fisher, Zach Galiafinakis, Matt Walsh
THE PLOT: Karen (Isla Fisher) and Jeff Gaffney (Zach Galiafinakis) live a quiet life in the suburbs of Atlanta, but all of this changes when the accomplished, beautiful and charming Joneses move in to the neighbourhood. Suspicious that people like Tim (Jon Hamm) and Natalie Jones (Gal Gadot) would move into such a sleepy area, she begins to spy on them and eventually discovers the truth; Tim and Natalie are not who they appear to be.
THE VERDICT: 2016 has already given us two spy comedies; ‘Central Intelligence’ and ‘Grimsby’, and with Melissa McCarthy’s ‘Spy’ just in our rearview mirrors, it seems like overkill to have another one hit Irish cinemas so soon… Yet here we are.
Gal Gadot and Jon Hamm play the beautiful, charming and overly accomplished Joneses, and they do OK with the roles, which just require them to look pretty, be affectionate with one another and occasionally up the action ante. It’s a shame to see Jon Hamm’s comedic timing wasted here though, as he is trying to read the fine line between comedy and drama without ever settling on either. Zach Galiafinakis and Isla Fisher play the comedic couple to Hamm and Gadot’s straight couple, and are fine in the roles that require them to be bumbling and freaked out all the time. The rest of the cast features Matt Walsh, Maribeth Monroe and Patton Oswalt.
The biggest movie credit to writer Michael LeSieur’s name so far is the 2006 comedy ‘You, Me and Dupree’, but he has been working on TV in the intervening years. The main trouble with ‘Keeping Up with the Joneses’ is that it is simply not funny… Although not for the want of trying. It is this forced feel that sucks most of the fun out of the film, so while the film has three actors who have proved their skills at comedy time and again – Jon Hamm, Zach Galiafinakis and Isla Fisher – the wit and sparkle the film needed is sorely missing.
Director Greg Mottola has also been quiet after his run of comedies in the Noughties – ‘Superbad’, ‘Adventureland’ and ‘Paul’ – and this is the first film from him since 2011. Trouble arises for Mottola with the pacing of the film; it is almost an hour in before the story truly gets moving, and although there are some high octane set pieces throughout the film, they do nothing to speed up the pacing. As well as this, seeing the same actors play familiar roles time and time again becomes dull; switching the roles of the Joneses and the Gaffneys could have lent more fun to the film, although anyone who would believe that Gal Gadot is a stay at home mom may have their priorities skewed.
In all, ‘Keeping Up with the Joneses’ is a familiar spy comedy in a year seemingly filled with spy comedies. It’s a shame to see Galiafinakis and Fisher play familiar roles, and see Jon Hamm’s comedic talents so sorely wasted, although there is a certain charm to Gal Gadot trying to step out of the Wonder Woman box. The jokes don’t land, however, and the pacing is too slow for the film to ever feel like there is anything truly at risk.
RATING: 2/5
Review by Brogen Hayes