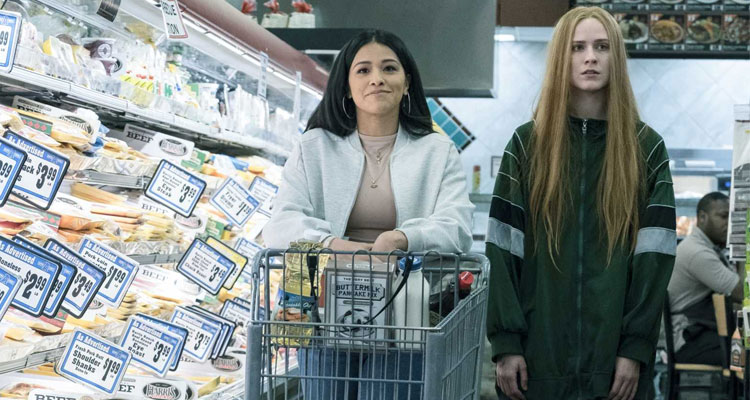 Old Dolio (Evan Rachel Wood) and her parents Robert (Richard Jenkins) and Theresa (Debra Winger) make up a family of career con artists. When they’re not boosting packages from the post office, they’re scrounging for leftovers on flights and always thinking of the next big job – in this case a heist. The socially-awkward Old Dolio has always lived in the shadow of her parents. They’ve always done their jobs as a trio, but that’s about to change. Robert and Theresa decide to rope in the enthusiastic and confident Melanie (Gina Rodriguez), a stranger whom they meet on a flight. Very much on the same wavelength, Melanie starts to shake things up with life-changing results…

The Verdict: Three feature films in 15 years. At this rate, Miranda July could be rivalling an early-career Terrence Malick in terms of output. The Vermont-born performance artist made a splash back in 2005 with her charming debut Me And You And Everyone We Know, followed by The Future six years later. Her own future looked like she had nothing more to offer cinema. However, she’s back with her new film Kajillionaire, in which she keeps behind the camera this time. It’s a welcome return for July, whose films have the same loveable quirkiness that fellow contemporary Wes Anderson has made his trademark.

In July’s script, the story is filtered through her optimistic view of life’s ups-and-downs, along with all the ensuing craziness that comes from living in a family that is just about getting by. We’re introduced to Old Dolio and her parents at a bus stop, as they prepare to raid a nearby post office. In that one short scene, July sums up everything you need to know about these oddball characters. The 26-year-old Old Dolio is stuck to her parents, like an awkward teenage girl who hasn’t quite emerged independently into the world. When outsider Melanie is introduced into the mix, she is the opposite of Old Dolio and starts to inveigle her way into the family. As they plan their big heist, what is the moral cost of their criminal actions and just who is conning who?

It’s a delight to discover how all this plays out in the relationships between the four characters. There’s talk of a heist sub-plot, but the actual heist in the screenplay is a more personal one, of hearts and minds. In a sense, July is subtly conning the audience into thinking where the story might go, before gently pulling the rug for a lovely closing shot. It’s a funny film at times, but not overly so. There’s a bittersweetness to it too, of lives unfulfilled and love unreturned. ‘No tender feelings’ as Old Dolio puts it. While July’s story is admittedly light enough to just float away at any point, it’s thankfully anchored by great performances.

Evan Rachel Wood, in a world away from her Westworld character, plays a dowdy, painfully shy young woman with conviction. Gina Rodriguez, fresh from her star-making turn in the Miss Bala remake, plays a street-smart woman who knows all the moves. Two wildly contrasting characters make for great onscreen chemistry between the actors. Veteran actors Richard Jenkins and Debra Winger round out the cast and also bring some pathos to their neglectful parents. Kajillionaire‘s real worth is in its warmly-written characters and they’re fun to hang out with for nearly two hours. It’s a sweetly charming film that worms its way into your heart, much like its characters. Let’s hope that July won’t wait another decade for her next film. The world could do with more authentic voices like hers.

Kajillionaire is now showing in cinemas across Northern Ireland.
& will be available to watch on the big screen in the Republic of Ireland when cinemas reopen.