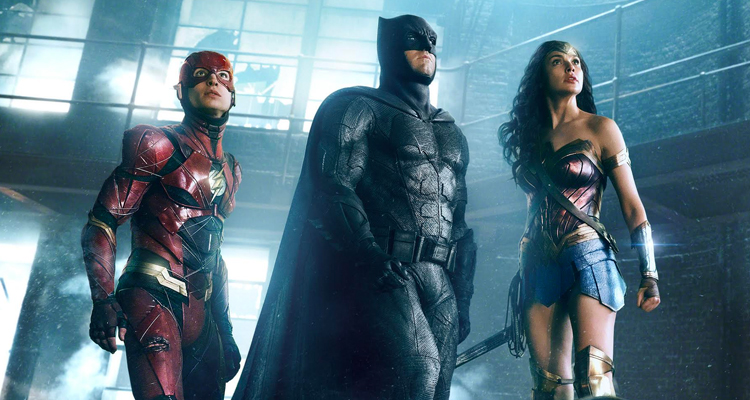 The Plot: The world is mourning the death of Superman. Whereas he once united the peoples of the Earth, now there is disunity and discord. A perfect time then for all-powerful super-villain Steppenwolf (Ciaran Hinds) to come to Earth. He’s searching for three mystical boxes that have the power to create or destroy, depending on their use. He’s more interested in the latter of course. The only people standing in his way are Bruce Wayne (Ben Affleck) and Diana Prince (Gal Gadot), but they aren’t enough to fight Steppenwolf. They seek out and assemble a team with special abilities – the Atlantean Aquaman (Jason Momoa), speedy wisecracker The Flash (Ezra Miller) and powerful man/machine Cyborg (Ray Fisher). Together they might just stand a chance to save the Earth once more…

The Verdict: Batman v Superman: Dawn Of Justice was not so much a reboot / face-off between the two biggest DC superheroes, but a super-sized set-up for Justice League – DC’s long-gestating answer to Marvel’s Avengers. Although it had its moments, Batman v Superman: Dawn Of Justice had some justly levelled criticisms laid at its feet. Justice League thankfully fixes some of those faults, while creating faults of its own that threaten the structure of the film.

First, the good stuff. Returning director Zack Snyder (with uncredited help from Joss Whedon) has shifted the confusing focus of the earlier film more into sharper view this time, making Batman and Wonder Woman the dynamic duo that drive the heroics. There’s a hint of romantic frisson between them which works well. Affleck has settled into the role more confidently and comfortably, making this Batman his own. Gadot already proved her mettle during the summer with her superb solo outing and she’s a force to be reckoned with here. Wonder Woman 2 can’t come soon enough. Who would have thought that brooding loner Bruce Wayne could play so well with others?

Now, the not so good stuff… As likeable as the new recruits are (especially The Flash), there’s an impression that they’re not only second-tier superheroes, but that they’re playing second fiddle to everyone else. Sure, they each get their own moment to shine and save the day, but their backstories are vague at best. Despite competent performances from the actors, they just don’t grab your attention in the same way. With Snyder having to step away from the film due to a personal tragedy earlier this year, Joss Whedon seems to have punched-up the script and added some of the humour from his Avengers Assemble. Let’s face it – DC’s superheroes can be po-faced and need to lighten up a bit more. The humour sort of works, but doesn’t quite gel with this world yet.

Big bad Steppenwolf is a bum note. With rubbery, unconvincing CGI and an inability to mouth dialogue convincingly, he’s a forgettable rent-a-villain. He seems to have been ported in from a videogame end-of-level boss. He’s all about the doomsday apocalypse, but we didn’t just have a Doomsday in the previous film anyway? On a technical level, the visual effects don’t seem up to scratch, with some odd CGI facial enhancements that are all too obvious on a massive IMAX screen. Danny Elfman’s rousing score does work though, including some musical throwbacks to his Tim Burton Batman films.

This reviewer feels conflicted about Justice League. There’s a good bit to like about the film and a good bit to dislike. The good doesn’t quite outweigh the bad though. The film falls midway on the quality scale, so two and a half bats out of five seems fair. If DC are thinking of pursuing further adventures in this cinematic universe, they should stick with what clearly works – solo Batman and Wonder Woman films or the two in their own film together. Now that would be something to relish.