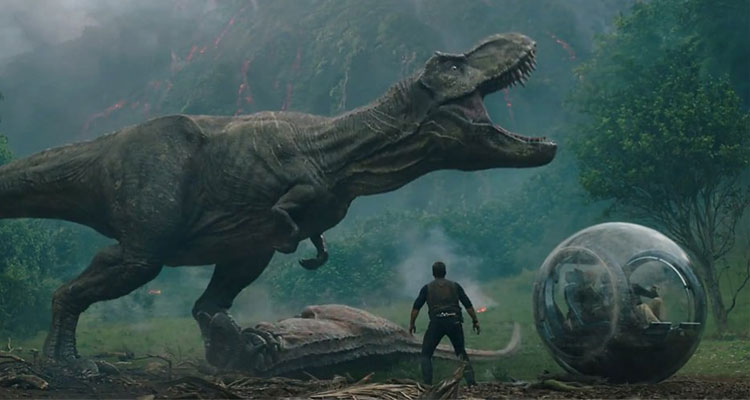 The Plot: Three years after the carnage and chaos of what happened on the newly re-opened Jurassic World park on Isla Nublar, the dinosaurs have been left to fend for themselves. The island’s formerly dormant volcano has now awoken and is threatening an extinction-level event once more for the dinosaurs. Some, like Dr Malcolm (Jeff Goldblum) believe that we should let nature should take its course. Others, like Claire (Bryce Dallas Howard) believe that it’s down to a small group of dedicated humans like herself to save them. She ropes in former flame and velociraptor whisperer Owen (Chris Pratt) on this endeavour, to save hyper-intelligent Blue. There’s a new sanctuary awaiting the dinosaurs, funded by John Hammond’s former business partner Lockwood (James Cromwell). However, getting the dinosaurs off the island is just the beginning of a whole new chapter in human / dinosaur relations…

The Verdict: 2015’s Jurassic World was a blast of nostalgic adrenaline, looking back to Steven Spielberg’s monster blockbuster while moving the evolution of lab-grown dinosaurs on to a whole other level for the 21st Century. Where do you take the dinosaurs from here though? The next step appears to be towards an evolutionary discussion about how we deal with dinosaurs in a human world that never knew how to live with them in the first place (contrary to many a Hollywood caveman film). That forms the basis of Jurassic World: Fallen Kingdom, a sequel that ups the ante, while taking the dinosaurs off the island in a way that is much more effective than The Lost World: Jurassic Park.

Colin Trevorrow and Derek Connolly’s sharply-written script serves very much as a middle chapter in a trilogy, with plenty of room left for further development. It expands upon the characters, packs in some tense set-pieces and is darkly cynical enough to suggest that the dinosaurs are not the real problem here. Director J.A. Bayona takes over from Trevorrow and brings his own aesthetic to the proceedings. The first half is a ticking-clock chase film, as our team of rescuers attempt to save as many dinosaurs as they can. It’s a thrilling chase over land and underwater, with explosive visuals.

Then Bayona shifts gears for the second half and moves more towards his origins as a horror director with the likes of the spooky The Orphanage and his environmental horror The Impossible. The sight of a new breed of dinosaur, the Indoraptor, creeping down a wall upside down and opening a window like Dracula is the stuff of childhood nightmares. The second half is Jurassic World as a horror film, but just about stays within the confines of its supposedly family-friendly rating. It’s frightening, but what you don’t see is scarier. A good director knows that, to push his audience but not too far.

Bayona maintains the momentum he built up in the first half and even exceeds it towards the end. It’s a film of two halves, but both work in unison and complement each other. The film is not without flaws of course. Claire is still an uptight suit prone to screaming, there’s one villain too many and the Indoraptor is menacing, but the T-Rex is sufficient for that anytime. They’re minor flaws though in what is overall a dino-mite sequel, which thrills, scares and entertains in spades while providing food for thought on where the series will go next. A roaring success.