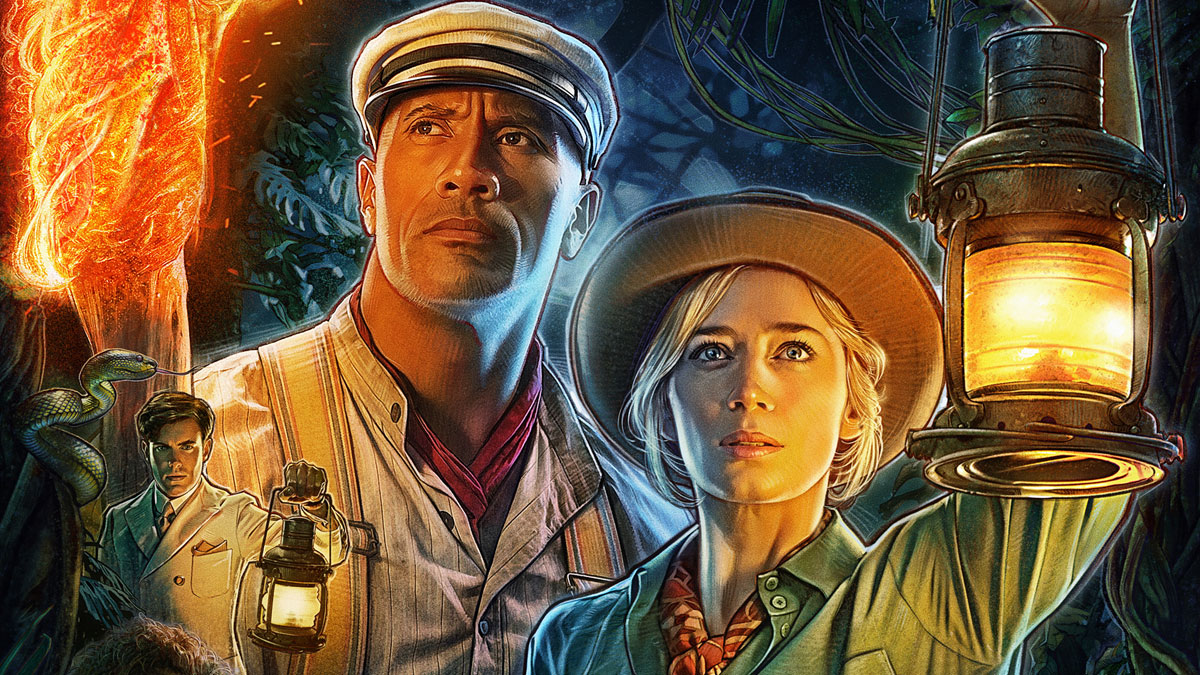 The Plot: London, 1916. Intrepid adventurer Lily (Emily Blunt) is searching for a flower from a tree with mystical healing properties. It only exists in the Amazon jungle in Brazil, where infamous conquistador Aguirre (Edgar Ramirez) and his crew became cursed and trapped in the jungle centuries before. Having ‘borrowed’ the key to finding the flower from German Prince Joachim (Jesse Plemons), Lily sets off to Brazil with her brother MacGregor (Jack Whitehall). There, she hires tacky but sincere jungle guide Frank (Dwayne Johnson) to take them through the dangerous waters. Raging rapids and hostile natives are the least of their problems though. Joachim is in hot pursuit, keen to unleash the power of Aguirre…

The Verdict: When Disney took one of their most popular theme park rides and decided to turn it into a live action film, some people scoffed at the lack of imagination. Had it come to this? We’ve had plays, books, magazine articles and videogames as the source material for film adaptations… but a slightly spooky theme park ride with animatronic pirates? Of course, the Pirates Of The Caribbean film franchise turned out to be hugely popular and is still going strong. So, it was perhaps inevitable that Disney looked towards another theme park ride for inspiration. The Jungle Cruise ride simulates a riverboat cruise down key rivers in the exotic jungle. That has been replicated to some degree in the film version, as we follow the lead characters on their jungle adventure as they manage all manner of scrapes and close encounters. The film version film adapts that into a family-friendly action adventure with a supernatural angle, a la Indiana Jones.

With some five writers credited to the film, tackling a basic concept and then boiling it down to an actual story that works for a film is a tricky business. It can’t just be a jazzed-up version of the ride, with all the bells and whistles of the film world. It needs to be its own thing and it’s clear that the writers and director Jaume Collet-Serra have taken the Pirates Of The Caribbean template as their basis to build the story. Frank is roguish but amiable, a used car-style salesman claiming to be the cheapest in town but secretly rigging his river cruise to get a reaction out of his guests. There’s a feisty female explorer in Lily, a lily-livered fish-out-of-water brother in MacGregor and an animal sidekick with fangs. Simply sprinkle in South American supernatural elements and a boo-hissable villain, bake it till ready and you have a reasonably decent story that chugs along like Frank’s battered but trusty boat. Frank and Captain Jack Sparrow no doubt frequent the same pub.

The trick with this film is that it doesn’t try to be anything more than what it is – that being like a fun theme park ride itself. All that’s missing is a motion seat and some mild in-screen effects – it would be an ideal candidate for 4DX. It’s cinematic escapism at its most obvious, a rollicking adventure into the unknown and back fronted by two sparring partners with crackling chemistry. They might seem like an unlikely pairing, but Blunt and Johnson hit off each other well here for many crowd-pleasing moments. They bring that star power necessary to keep the audience on side and distract them from elements that don’t quite add up. For example, Jesse Plemons’ broad pantomime German parachuted in from a Monty Python sketch is too cringeworthy to talk about further. Meanwhile, the intense Edgar Ramirez does what he can with his ambitious conquistador before he’s lost thereafter in a swirling gloop of CGI pixels. They’re just obstacles to be overcome down the river, but they didn’t need to be set at silly by default. Maybe a child escaped into the editing room and played around with the third act like a toy boat in a bathtub. There’s little sense here of a coherent climax.

That said though, there’s a likeable old-school Saturday matinee quality to Jungle Cruise – like the serials that had a cliffhanger conclusion each week. Collet-Serra, a director of several effective horror films like Orphan and The Shallows, taps into that same spirit by having a frequent cliffhanger to amp up the tension with lots of derring-do and dastardly villainy. While it clocks in slightly longer than it should be, the fast-moving plot ensures that you won’t be looking at your watch. It’s an unashamed summer blockbuster and runs with its concept to become a bright, colourful adventure for all the family. Popcorn fun at its most basic yes, but with the added effect of feeling like an actual theme park ride come to vivid cinematic life. Strap yourselves in and enjoy the ride.