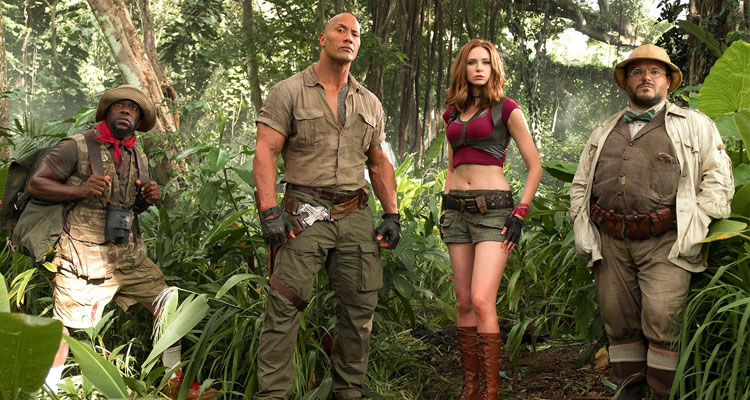 Jumanji: Welcome To The Jungle

JUMANJI: WELCOME TO THE JUNGLE (USA / 12A / 119 mins)
Directed by Jake Kasdan. Starring Dwayne Johnson, Jack Black, Karen Gillan, Kevin Hart, Alex Wolff, Madison Iseman, Morgan Turner, Ser’Darius Blain.
THE PLOT: In 1996, a young man finds a board game called Jumanji. Thinking that nobody plays board games anymore, it turns into a video game overnight. He disappears that same night. In the present day, four misfit teenage students find themselves in detention – Spencer (Alex Wolff), Bethany (Madison Iseman), Martha (Morgan Turner) and Anthony (Ser’Darius Blain). Cleaning up the basement, they find the same old videogame console and decide to play. Big mistake, as Jumanji takes everything to the next level and sucks them into the videogame. They become the avatars in the videogame – played by Dwayne Johnson, Jack Black, Karen Gillan and Kevin Hart respectively. Their quest is to retrieve a missing stolen jewel and restore balance to the world of Jumanji. That is, if they can work together and survive all the obstacles in their way…
THE VERDICT: ‘Jumanji’ was a fondly-remembered family adventure film from 1995, which featured a young Kirsten Dunst and a wild, on-form Robin Williams. Sony have dusted it off for a 21st Century makeover, making it a sequel rather than a reboot. Fears that it could be yet another new take that ruins a childhood memory appear to be unfounded. For this is a surprisingly good and good-humoured adventure with a spot-on cast that play it exactly as it should be, tongue firmly in cheek.
With four credited screenwriters, there’s a risk that it could end up being a mess in the story department. Not so, as the script is tight and focused, introducing the younger characters first and not in a bland way either. They’re well-drawn and break out of the usual high school stereotypes. When the adult actors take over as their in-game counterparts, it’s a seamless transition. You can still sense the younger actors there, but now transformed into videogame types – the hunk, the nerdy scientist, the Lara Croft-style babe and the comedy sidekick. Johnson and Black have the most fun, mercilessly sending up their usual onscreen personas.
Once it gets going, the quest to find the missing jewel isn’t exactly re-inventing the wheel. There’s a backstory involving a villain (Bobby Cannavale) but he’s mostly kept in the shadows, only popping up to bark orders and look threatening. A little more plot development here wouldn’t have gone amiss, even if he is a videogame character. More interesting is the journey that the teenagers/avatars take to complete the quest, discovering important things about themselves along the way. Director Jake Kasdan stages some terrific action sequences that amusingly play around with the idea of individual powers/weaknesses, limited lives and the threat of a real game over for everyone.
Despite some flaws, ‘Jumanji: Welcome To The Jungle’ is riotous fun. It gets the tone just right, with a healthy balance of humour, heart, action and adventure. There’s also a respectful nod towards Robin Williams at one point, which is welcome. It’s a film with both a retro and a modern feel, bridging the generations and proving quite satisfying.
RATING: 3.5 / 5
Review by Gareth O’Connor