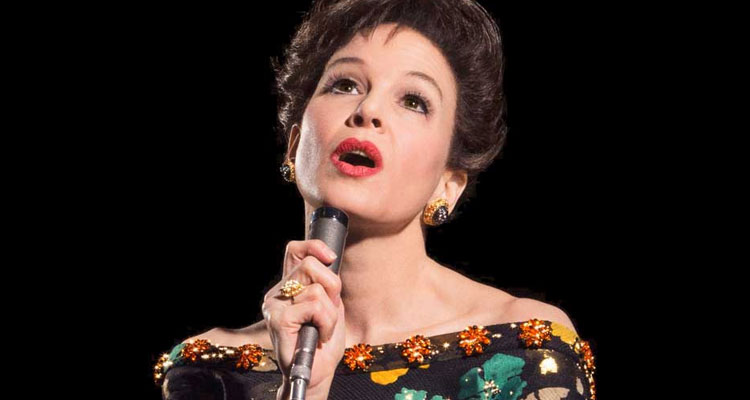 The Plot: It’s 1968 and famed starlet Judy Garland (Renee Zellweger) is now middle-aged, has gone through four failed marriages and has an addiction to pills and alcohol. With her eldest daughter Liza now grown up, she still has two young children to look after. Money is a concern, so she takes an offer to do a series of sold-out concerts in London. She’s flighty, late for her shows and has a nervous fear of on-stage failure, much to the concern of local helper Rosalyn (Jessie Buckley). When she’s on stage though and fully shows up, there is no one else quite like her – belting out one great tune after another. But this exterior confidence masks all her insecurities about life and her dependence on others…

The Verdict: In the opening scene of Judy, we wander around the Yellow Brick Road with a teenage Judy Garland (Darci Shaw) and movie mogul Louis B. Mayer. He tells her that there are plenty of other girls like her from small country towns who arrive in the dream factory of Golden Age Hollywood, but she has something different about her. He wasn’t wrong there. Judy Garland did have that something special about her. She was the girl next door who dreamed big and survived the difficult transition from child to adult star, unlike her contemporary Shirley Temple. But what happens to a star when she starts to fade? Not into insignificance, but her talent starts to show cracks and insecurities, the culmination of a life making others happy but not looking after number one enough. Films about fading stars are nothing new, but there’s something about new biopic Judy that re-captures just what made her a screen icon.

The film is based on the stage play End Of The Rainbow by Peter Quilter, adapted here and opened out by Tom Edge into a more cinematic offering true to its subject matter. It portrays Garland in an honest but not unkind light, confronting her dependence on pills, alcohol and other people to make her function on a daily basis. This is where Rosalyn comes in – the put-upon helper who gives Garland some brusque words just to get her onstage to perform. She’s a bit like a toy that needs to be wound up, but a toy that is also a bit broken inside. Second-time director Rupert Goold suggests that may have something to do with the level of control exerted by Mayer, who encouraged her to take pills rather than eat and stage managed her life – common enough for studio-contracted stars at that time. Goold shows a certain level of sympathy for Garland, portraying her as someone used to being different. An amusing encounter with two kindly male fans is more poignant than it first appears and is a stand-out scene.

The film follows a certain trajectory, sliding Garland towards her untimely death but showing her in her prime even then. The film’s secret weapon is undoubtedly Renee Zellweger. She elevates what could have been a basic fading star biopic into something more resonant. When you have an actor of her calibre, expect fireworks. Not of the showy look-at-me-Oscar variety, but of an actor fully immersing in the role to the point where one doesn’t notice the acting. She provides her own vocals on the songs, which are so exuberant and dripping with significance for Garland’s own story that audiences might get goosebumps hearing her most famous song – now sung by an older voice weighed down by life experience. Zellweger also does a subtle, wide-eyed little girl lost act, which neatly ties in with the engaging younger Judy sequences and that gradual loss of innocence. It’s a remarkable, show-stopping performance that powers this touching late-career biopic to a bittersweet conclusion. She certainly had that ‘thing’ and somewhere over the rainbow, audiences will be left in no doubt about that.