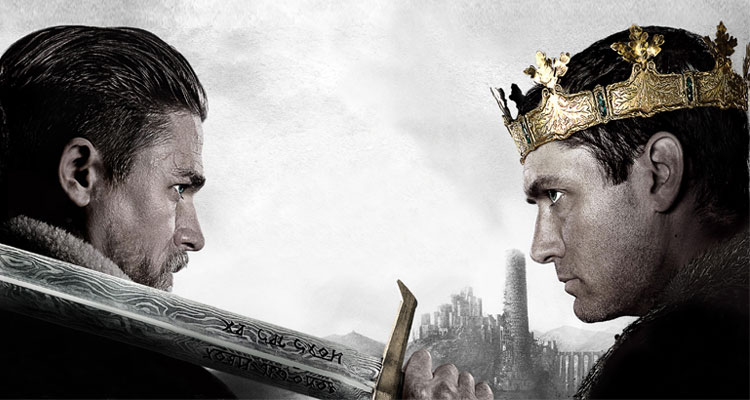 JUDE LAW – Interview for KING ARTHUR: LEGEND OF THE SWORD

‘Lock, Stock…’ director Guy Ritchie returns to cinemas this month to reinvent the legend of ‘King Arthur’, with ’Sons Of Anarchy’ star Charlie Hunnam in the lead role, while Jude Law steals the show as villain Vortigern, We met up with the always charismatic actor to talk about this fresh and exciting take on the ‘King Arthur’ mythology.

It’s your first time working with director Guy Ritchie since ‘Sherlock Holmes – Game of Shadows’ – What is he like to work with?

When I was first asked by him to get involved in ‘Sherlock Holmes’ I was intrigued. There are very few directors who do big tent-pole movies with such a distinctive signature. You can tell which ones he’s made, that can sometimes be quite divisive but it certainly makes them authentic to his approach, they have a very particular humour and energy. I think anything that sets a piece apart where we get a lot of these tent-pole movies to choose from is admirable. I was intrigued to see how his style applied itself to Victorian London in the Holmes legacy and I was intrigued this time around to see how it was going to apply itself to ‘King Arthur’.

His decision on one hand to make it within the mud and blood and sh*t of Londinium, while on the other hand within a fantastical, fairy tale world is very clever. Because, we know that characters like Merlin and Arthur are not historically factual. Truthfully, I hadn’t been involved in a project of this scale for a while and I’m always very happy to be on Guy’s sets.

It’s been a while since you played a villain on screen?

Right… It has been a while. ‘Road To Perdition’ was probably the last time. I was curious about the history of this character, I like the idea that he was the second brother, he’s being used as a democratic pawn, he’s got an understanding of this magic that he carries as a sense of superiority. He’s rotten in the middle, I saw him as this glorious fruit that he looks great on the outside but inside he’s decaying and corrupt. I didn’t like the idea of playing a camp moustache twirling villain, he represents the true threat of fascism, he represents the true threat of ego and power gone mad which is more relevant today than ever before.

Your character has been seen in other adaptations over the years, including TV, films, comics & video games. Did you look back at any of these for your research?

Arthurian history is quite muddy. I just went back and did research in the library and on Wikipedia to find out more about him historically, it didn’t necessarily help me. That kind of information gives you a historical grounding but it doesn’t link directly to the script. More important was taking the script and creating a back story prior to the film so I had an idea where my character was coming from. And the idea of hinting early on that I’d a sense of the dark-side that I wanted to take Uther’s power to use which I thought was an interesting drive, that he has to kill the one he loves as the price for his power. Grief is power, mourning is the one thing that he’s addicted to, he’s stolen the heart of the woman he loves to pay for that drug.

Is it tough to get into the mind of an evil character like Vortigern?

Yeah… He wasn’t enjoyable but it was fun creating the visual look, I like that he looked reptilian and silky but at the same time I wanted him to look really rich and lush. He’s not a king that’s whoring around, throwing huge banquets, he’s very lonely, I liked the idea of him dripping in these wonderful garbs, yet at the same time he’s lost and depressed. I didn’t want him to be loud and full of declaration, I wanted him to be silent and powerful in a minimalist way.

I wanted to contribute a character that was rounded, three dimensional, complex while palpably threatening and unflappable. He’s a newish addition, so a lot of people mightn’t know him.

You mentioned Vortigern being addicted to power, the same can happen to actors when they get famous. What’s your secret to not being swept away by your own power and fame?

You have to be aware of the dangers, you have to hope that you keep sensible, sane people around you who don’t let you away with anything stupid. That you keep your feet on the ground and remember that it’s just a job. As with anything in life, don’t get impressed by the things that are surface and shiny and appealing and look for a sense of longevity.

KING ARTHUR : LEGEND OF THE SWORD is in Irish cinemas from May 17th