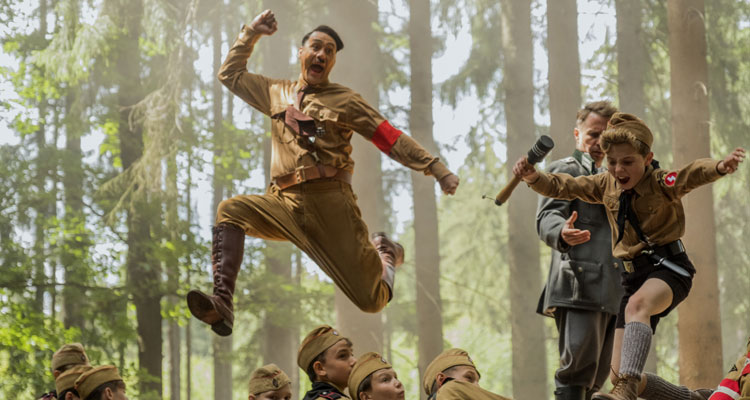 In short: Hops along merrily

The Plot: Germany at the rabbit’s tail-end of WWII. Jojo (Roman Griffin Davis) is 10½ and is training to be an ideal member of the Hitler Youth. He loves his mother Rosie (Scarlett Johansson) and his country, but doesn’t understand why being cruel and prejudiced is an acceptable norm. When he refuses to kill a rabbit at the order of his superior, he earns the nickname of Jojo Rabbit. He has an imaginary friend too, in the form of Adolf (Taika Waititi) who advise him on the right way to act and react. When Jojo discovers a girl living in the walls of his house, he’s shocked to learn that she’s Jewish and fears that she’ll lead him towards The Devil. However, Elsa (Thomasin McKenzie) teaches him that she’s actually another person with feelings just like him…

The Verdict: If you know anything about the potentially controversial Jojo Rabbit, then you’ll know that another of New Zealand’s finest exports, the incomparable Taika Waititi, plays Adolf Hitler in it. Or at least an imaginary version of him, as filtered through the mind of a boy in the Hitler Youth. Maybe it’s just as well, as the film might not have got made otherwise (Fox Searchlight greenlit the film on the basis of him playing Hitler). A skilled comedian as well as a talented writer/director, Waititi has pushed at the boundaries of comedy and satire before, while tinting them with moderate doses of harsh reality. Here he goes for broke with a WWII satire that is both poignant and absurd, edging its way into acceptable territory for a modern audience. Just about though.

Based on the book Caging Skies by fellow Kiwi Christine Leunens, Waititi’s screenplay is framed as a coming-of-age story about a boy learning to grow up a little bit quicker due to WWII and the resulting first pangs of love with an unlikely ally (charmingly depicted with butterflies in Jojo’s stomach). This is very much in tune with Waititi’s previous films about boyhood, with the world view skewed through the perspective of our cheerful, well-mannered protagonist. He’s prone to flights of fancy though, which is where Adolf comes in. Waititi had no interest in portraying an accurate version of Adolf Hitler, instead preferring to imagine what the genocidal dictator would look like to a young boy far removed from the corridors of power in Berlin. With a nod towards Charlie Chaplin in The Great Dictator, Waititi plays an outrageously satirical Hitler… but it works. His brief pop-up appearances are a highlight.

There’s an uneasy, nervous tone throughout the film though, burdened occasionally by unnecessary crudeness. Waititi is daring you to laugh at times and also makes you feel guilty for doing so. Some of the jokes are spot-on, such as the Heil Hitler-loving Gestapo stooge played to perfection by a weedy Stephen Merchant. Other jokes are deliberately placed dud mines and might make jaws drop, like a child suicide bomber gag. Edginess is necessary for satire to work in such a story, but Waititi’s script lacks the finesse of, say, Chris Morris’ excellent work on Four Lions. As the story sags in the middle and becomes bogged down in overly long scenes about why Elsa is a person too (which should be glaringly obvious to a sensitive, caring boy like Jojo), it’s apparent that this film is not in the same league as Waititi’s best film to date, Hunt For The Wilderpeople.

That’s OK though. Jojo Rabbit is content with its lot and Waititi doesn’t push himself too hard here. He’s kicking back and having fun at the expense of cinema’s ultimate bad guys – Nazis. Dig a little deeper though and there’s a positive message about tolerance and acceptance of others, as well as growing up and dealing with death at a young age. In our divided times when right-wing xenophobia is rising and borders are closing, Jojo Rabbit has a story to tell about the past that is relevant to today. It has its flaws, but it hops along merrily to its own beat and is held up by two strong child performances from Leave No Trace’s Thomasin McKenzie and the Golden Globe-nominated Roman Griffin Davis.