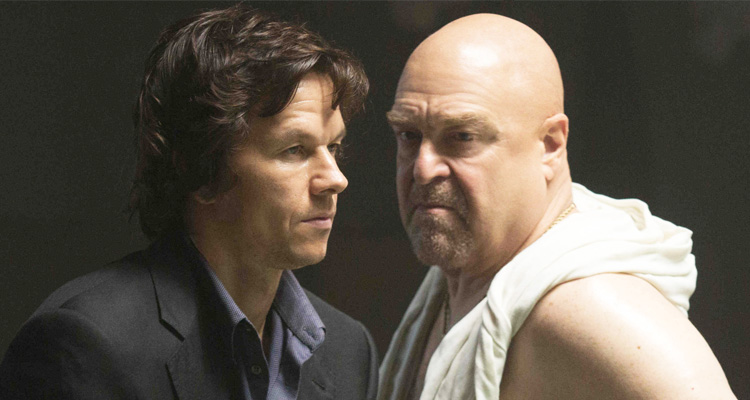 John Goodman Interview for THE GAMBLER

In The Gambler, John Goodman turns up the tough as Frank, a no nonsense loan shark to whom Mark Wahlberg’s eponymous English professor-come-gambling addict, Jim Bennett, becomes dangerously indebted.

A reimagining of James Toback’s 1974 autobiographical film starring James Caan, the new movie, set in the seedy underbelly of contemporary LA with Wahlberg in the title role, promises both a departure and an update from the original. Produced by the star (in conjunction with the legendary Irwin Winkler), it’s directed by British helmer Rupert Wyatt (Rise of the Planet of the Apes), penned by Oscar winner William Monahan (The Departed), and features a supporting cast which also includes Oscar-winner Jessica Lange (playing Wahlberg’s mother) and Brie Larson (Short Term 12) as his prized pupil.

A perennial screen favorite, John Goodman’s most recent movies include George Clooney’s The Monuments Men, Inside Llewyn Davis for the Coen brothers (additional films for the Coens include Raising Arizona, Barton Fink, The Big Lebowski and O Brother Where Art Thou) and The Hangover III. Stuffed into a cheap suit and sporting a freshly shaved head – “the director’s idea,” quips Goodman – we caught up with the legendary actor between takes as The Gambler entered its final week of production.

What attracted you to The Gambler?
The script and Mark Wahlberg, he’s just one of those guys I’ve always wanted to work with. And the script was terrific. The story opens up a whole can of worms about compulsion and self- destruction. I probably won’t figure it all out myself until I see the finished product. But it raises a lot of questions, which is good, because I don’t like cheap answers.

Tell us about the character you’re playing.
Frank… He’s a loan shark. A self-educated guy. He has his fingers into a lot of stuff. Very wealthy, but very careful.

How did you create his look?
Rupert (director, Rupert Wyatt) asked me to shave my head. I didn’t ask why. But I said, “Yeah, sure…” I haven’t been bald for a while. And for Frank, it’s just kind of a control thing. He likes things to be controlled. Controlled and clean.

You said you haven’t been bald for a while. When was the last time you shaved your head?
For a show I did in New York five years ago, Waiting for Godot. I wore a derby the whole time except for one time when they reveal that everybody’s gotten their head shaved. But it didn’t really look shaved… No matter what I did, it always looked stubbly. But these guys did a really great job with the makeup.

Anything else you did to prepare?
No, not really. You just kind of let it sink in by osmosis… The last few years I’ve found that it’s very helpful to just listen to my inner voice and let it take over. So that’s what I did on this one.

What’s been the biggest challenge on The Gambler?
Learning the lines… Well, it was easy because the dialogue is so good, but I had long passages to remember and I didn’t want to screw anything up. So it’s just that. Getting everything proper, the way it was intended to be said.

What’s it been like working with Mark Wahlberg?
Mark is as solid as a rock. He’s very dependable and very funny. Those are two things you want when you’re working with a guy for 14-hour days.

And your director, Rupert Wyatt?
Rupert is very exacting. He’s got a great eye for detail and he’s also really helpful. You’ll be doing a scene for a while and he’ll come up with a question or a new angle to really set you up on a fresh tangent. That’s extremely helpful. And it’s amazing, the eye that he has.

How closely does the new film follow the 70s original?
I loved that movie, but I don’t remember much of it to be honest. I haven’t seen it for so long, and I didn’t want to go watch it again. At least until I’m finished here.

Do you like this kind of hardboiled drama?
I do. I’ve always followed this kind of stuff. I like the mood, the look. And of course, the story. It’s pretty tough… I still haven’t figured it out, what’s eating this guy [Frank]. But I think that’s best left in the audience’s hands. Even if you spell it all out, he’s really got a problem.

THE GAMBLER is now showing in Irish cinemas