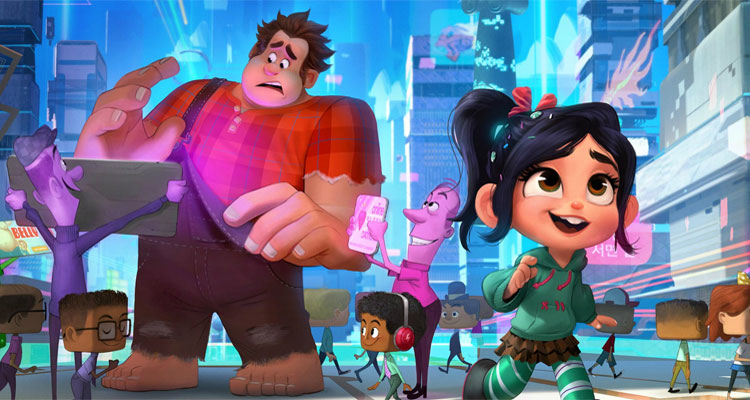 We had a chat with John C. Reilly about Disney’s new animated adventure; WRECK-IT RALPH.

John C. Reilly has had an incredibly varied career and has wowed audiences with dramatic, comedic and even musical performances. When the actor was in Dublin this weekend, Brogen Hayes sat down with John C. Reilly to talk about his latest cinematic adventure; Disney’s Wreck-It Ralph.

What drew you to Wreck-It Ralph?
John C. Reilly: It’s funny to say this because we are talking about video game characters in this movie, but it was the human story; the fact that this guy is on a journey of self-discovery. He is such a sweetheart; it just seemed really touching in a not overly sentimental way.

Did you have room to improvise in the film or was it a case of sticking to the script?
JC.R: No, that was another one of the chief things that drew me to it; the director Rich Moore and the writer Phil Johnston both were really open to any ideas I brought and we always had loads of time every day, when we were recording, to improvise or do variations on the script so it was totally collaborative, the way the movie came together.

Both you and Sarah Silverman are known for your adult brands of humour, was there anything didn’t or couldn’t make it into a Disney film?
JC.R: Not really. Everyone associates Sarah so much with her stand up act… The fact is that she is just a good actress. It wasn’t like she had to have a minder from Disney to keep the language clean or anything, she is playing a tiny little girl character and the character is what it is… She’s just an actress, her stand up is one thing, and I think she showed her ability to transform in the film quite well.

You had a role in the animated film 9, but this is your first major animated role, how challenging was this?
JC.R: I liked it. I could get used to not having people poke you with make up brushes and make you change your clothes three times a day! [laughs] I liked the ease with which we worked. Like I said about the recording process; we always had more time than we needed because the animators were always miles behind us, so we would record for a couple of hours, eat some lunch, come back, mess around a little bit and then I would go away for two weeks and go and do something else, then come back and check in. I could really get used to that way of working. It was also the longest job I have ever had in my entire life, including manual labour, which doesn’t say much for my reliability as an employee, but there you have it. This was over two years of recording; I am sad to say that most of my jobs don’t last more than a year.

There are many classic video games referenced throughout the film, did you play any of these as a kid?
JC.R: Yeah I played Space Invaders, Pac-Man and all that stuff. If you were my age in the early 80s, that’s what everyone was obsessed with.

Are you a Disney fan? How did it feel becoming part of the Disney family?
JC.R: It’s an incredible honour. Yes, of course, as a kid I was so influenced by Disney films, as everyone was. I just remember, so many nights sitting in front of the TV, when Tinkerbell goes over the castle and that music starts… Whether it was an animated movie or just a Disney film that was on television. It’s something y’ know? The most magical place on earth, right?

Do you have a favourite Disney character, apart from Ralph?
JC.R: I am a big fan of Balloo in The Jungle Book.

From doing Wreck-It Ralph, you will have a much younger fan base now who will, presumably, grow up watching your comedies and dramatic films almost in the reverse order that you made them, how does that feel?
JC.R: It feels great! [laughs] What does the song say, the children are the future? It’s great that older audiences know my work and appreciate what I do, but if you want longevity as an actor, you have got to stay relevant; you have got to reach out to younger people. Also, it just feels good to interact with younger people. Even with this, even though it’s just my voice, kids will come up to me… They hear me, they hear my voice and they look at me like they are trying to figure out why I don’t quite look like Ralph… ‘But I know it’s him! You’re Ralph!’. You never get tired of that; you never get tired of those interactions with kids.

How do you find a balance between a dramatic and emotionally heavy film like We Need to Talk About Kevin with something like Wreck-It Ralph?
JC.R: I don’t try to balance it. I just go to work and try to do things as well as I can and then I leave it to the audience to balance it. Luckily, the audience has been very open to  letting me bounce all over the place. It’s amazing, how much leeway I have been given to do different things. There is a reason that typecasting happens; because the audience wants to see you as a certain thing, and they will let you know if they don’t, so I have been very lucky to be able to have the variety in the work that I have done.

As well as your dramatic and comedic roles, you sang in Chicago the musical, were you ever tempted to go back to musicals? Were you fighting for a role in Les Misérables?
JC.R: I did audition for Les Mis! [laughs] I would love to do another musical, that’s what I grew up doing. Those are my people! Show folk! I hope they start to make a lot more movie musicals. Every time they make one, people keep saying ‘it’s the new age of the movie musical!’, and then it’s another five years before another one gets made. I hope they keep making them; it’s an awful lot of fun to watch a musical.

Is there any particular musical you would like to be a part of?
JC.R: For some reason I keep thinking of Brigadoon, which is a play that I did in high school and I just love the music from that. There is a brilliant movie of it already of course, with Gene Kelly and Van Johnson, but that might be one that would be good for a reinvestigation. I also think that we could do with a few new musicals… Disney did a lot to keep that art from alive with Beauty and the Beast, the music and lyrics from that are just incredible.

So maybe we should campaign Disney to put you in a musical?
JC.R: Yeah. Maybe we will make the sequel to Wreck-It Ralph a musical! [laughs]

What’s next?
JC.R: I don’t know. We’ll see. I am developing a couple of things, trying to develop some of my own projects.

Interview by Brogen Hayes
With thanks to The Walt Disney Company, Ireland