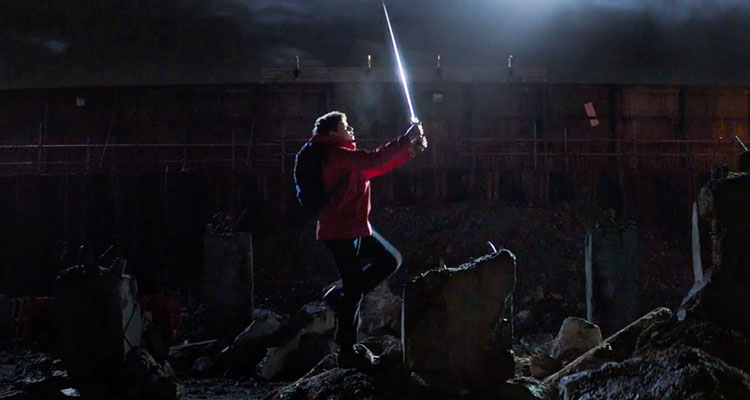 Joe Cornish – Interview for The Kid Who Would Be King

Joe Cornish is an English comedian, writer, actor and film director who together with his long-time comedy partner, Adam Buxton, forms the comedy duo Adam and Joe. In 2011, Cornish released his directorial debut Attack the Block & this month he returns with the larger than life kids adventure ‘THE KID WHO WOULD BE KING’. The director was in Dublin this month and Movies.ie caught up with him to chat about his new movie.

Congratulations on the film. It is a perfect adventure for children. Were you a fan of the Arthurian legends when you were young?

I was a fan of the Arthurian legends. I saw John Boorman’s Excalibur when I was far too young to actually watch it. It really had a powerful effect on me. Not just because it is violent, racy, and exotic but also because it is the best telling of the legend in cinema ever.  It is almost like a science fiction film because it is so exotic, it feels like the future. It’s like Star Wars or something, so that’s where I really engaged with the story. I watched Disney’s Sword in the Stone, I read the Once and Future King by TH White, I loved of all of the different ways of telling the stories. When I was a kid, I was always coming up with films I could make and I thought this would make a great idea to make a British blockbuster, to tell the story of a modern kid who finds the Sword in the Stone.

So, you have been planning this since you were a child?

There is a lack of children’s adventure films today. We don’t see films like the Goonies anymore, but this has so many of those elements. Was it important for you to bring back traditional children’s movies?

Definitely, when I was a kid, I could see actors my own age in these big fantasy adventures often set in a recognisable reality. They were normal kids from suburbia to whom fantastical things happened. Today it’s all superhero movies, animation, and big franchises that are like glorified toy commercials. I wanted to provide what I had as a young filmgoer to contemporary kids.

The kids are brilliant actors and they have great chemistry, how hard was it to find the right actors?

You are always limited when it comes to child actors because there is only so many available in the right age range. We did a massive search around the country and it didn’t matter whether they were professionals, or if they had experience or not, or if they had an agent. We saw everybody of the right age range and we have ended up with a great cast. Of the main cast, we have two from acting families, a first-time actor, a theatre actor, and a film actor. They are a great mix.

Your lead is Louis Ashbourne Serkis, son of actors Andy Serkis and Lorraine Ashbourne. Andy Serkis is a renowned actor and director, where you worried about him side directing?

No, Andy is really lovely and very helpful. I worked with him on Tin Tin. He was a really supportive presence. He was often on set as a chaperone to Louis, and it was lovely to be able to pick his brain and ask his thoughts on certain shots.

Young Merlin, Angus Imrie is absolutely brilliant. It is a quirky role, was it hard to cast?

When he walked into the audition, I was so relieved. It is was a tough part to cast and I needed someone who was flamboyant, eccentric with great charisma but also capable and controlled. He embodied the character instantly.

They did and it was one of the things that excited Patrick, he really wanted to work closely with another actor. Angus’s mother is of course actor Celia Imrie, and Patrick knew Angus when he was a little boy so it was a thrill to work with him now. They recorded their dialogue and sent it to each other so they could match their speech pattern. They recited Shakespeare simultaneously side by side in the audition, they were in sync from the start. They did a lot of work to make it credible that they were the same person.

Absolutely, I wanted him from the start. I sent him a script which he replied to straight away and we met in his house for three hours and talked about it. He wanted to be involved, but he was concerned that his wizard would be different from all the other movie wizards because he is friends with all of those actors, like Ian McKellen, and wanted to be his own wizard. Merlin really is very different, he is the type of man you might want to call social services on if you saw him on the street! He is eccentric and shambolic.

They say don’t work with children, a rule I have broken in a theatre context and found the children to be more professional than the adults! Were you worried about working with them?

I found that as well. The first thing about working with young actors is that you are giving them such a fantastic opportunity that they tend to be very excited to be there and work twice as hard. They bring so much zest which invigorates the cast. The adults are on their best behaviour on set, and because kids can’t work over a certain number of hours it means the crew isn’t exhausted from working super late. It was like being a teacher at a school where all of the kids were desperate to learn.

The film deals with a lot of issues and it’s hard not to think of Brexit when you are watching it. Was that intentional, or a timely coincidence?

People have said that, and I have to be careful with this question because it is a kid’s movie and it’s fun, it’s thrilling, and exciting but the legend of King Arthur is a national creation myth. It is about a king who arrives in a broken country and unifies the warring tribes. The film does have a political element to it. When you tell it now the idea that this boy is in a broken country works well for slightly troubling reasons.

Stonehenge is a protected site, were you allowed to use it as a filming location?

No, we had to create it digitally because there are tourists there all the time and the site would lose too much revenue if they had to close. But also, they don’t like to be associated with magic. They only like it portrayed as a historical location. It complicates things for them when the magic element is highlighted. We did use the real Tintagel and other sites associated with the Arthurian legends and other beautiful English sites.

Do kids work better with green screen and CGI than adults because of their imaginations?

They do actually. They have amazing imaginations and can really visualize things. I like to build as many real and practical sites as possible though. It’s amazing to be able to give actors some reality to work with, especially kids.

Irish actor Denise Gough plays Alex’s mum, what made you cast her?

She is such a wonderful actor. I saw her in People, Places, Things and she was phenomenal. The role of the mum in this is small but crucial.  Denise was my first choice and it was thrilling to have her onboard. She is so down to earth, she really respects the material and the scenes between her and Louis are really beautiful.  She is brilliant, I love her.

There is plenty of scope for a sequel, have you plans to make one?

I think it is really important to make a standalone film that has a proper ending which is what we did with this, but yes there are so many other legends and characters that we could work with so you never know. For now, I am just glad we were able to get this made because it wasn’t always easy to get it off the ground.

What were the difficulties in getting it greenlit?

The film industry has changed. It is hard to get an original story made. Everything is either a franchise, a remake, a giant blockbuster. Studios are risk-averse, they are happy to back something with a small budget but if lots of money is involved the industry wants something big, and recognisable. It was tough to get this off the ground but it was worth it. We can’t keep watching the same films over and over. Someone has to make new material.

You spent some time in the blockbuster world when you worked on Ant-Man. When you write for something as big as Marvel are you constrained in your writing by the need to fit in the MCU universe?

When I worked on Ant-Man with Edgar Wright Marvel, was a very different company. It was around 2004 before the MCU idea had really evolved, before the cross-pollination of characters began. When it came to making the film the MCU was in full swing, but our script was very different. It was a completely standalone adventure very much in Edgar’s style, but then they had a vision that he couldn’t get on board with. Marvel has become so much better at working with auteur directors now, like with Thor: Ragnarok which is so good. At that moment in time, Marvel had a set way and it just felt wrong to Edgar to have this last-minute change in the fabric of the script.