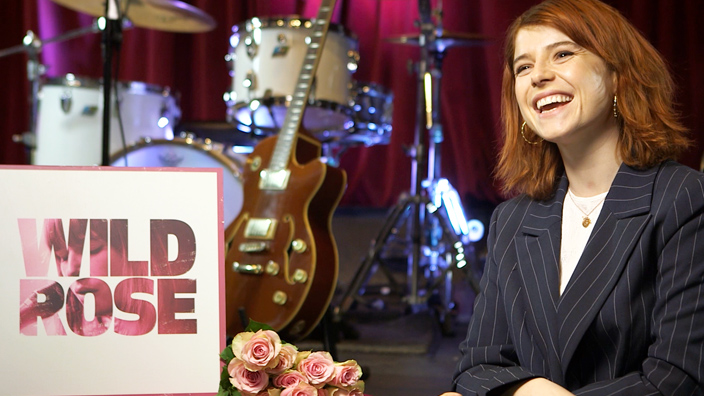 There’s no stopping Irish actress Jessie Buckley’s rise to the top. She’s come a long way since being discovered by Sir Andrew Lloyd Webber on a TV talent show. The Kerry native was recently picked as a BAFTA rising star and this month she’s winning rave reviews for WILD ROSE. A movie about a young woman desperate to break into the country music scene, much to the chagrin of her mother, played by Julie Walters. WILD ROSE opens in Irish cinemas on April 12th

You come from a musical background, so was the chance to act and sing in the one film a dream come true?

Oh my god, yes, it was a once in a lifetime kind of opportunity. I hadn’t sung in a while and had lost my nerve a little, but this was such a joy. Getting to work with the musicians I got to work with, making this film with some of my best friends, and to have this amazing woman at the heart of it. I’ll never do anything like it again, I’ll be out of work for the rest of my life because nothing will ever be this good again!

The central trio of characters are strong, flawed, real women who aren’t relying on men which is still something unusual to see on screen. Was that part of the attraction?

Yes, it was great to see three women front and centre and for them to be independent. I was conscious of it because these women were so on their own journeys, but what I loved about it was that these were three very real, raw, authentic, humane characters. You don’t really see female leads like this, who are rusty on the outside and have foibles. Sometimes they are unlikeable or unnerving to watch. That felt really exciting, that we could bring something very real to the screen.

The script is such a lively piece of work. Did it jump off the page at you?

Oh, completely. It dislocated me in every single way when I read it. Nicole [Taylor] is such a fearless writer. She is not afraid to go right into the questions that are sometimes hard to have asked of you. She digs as deep as she can to find complexities in each character. She has been cooking up this idea for 10 years. She has a burning passion for country music which goes back to when she was 7 so it was a real passion project for her. It’s a love letter to country music, a love letter to Glasgow, and to her mum. All of that burst out in this script.

Is the technique of singing country songs very different from what you were used to singing in the past?

Yes, it just requires you to  drink more whiskey, smoke, and break up with people! I worked very hard on that.

For a film like this do you do a lot of prep work on the music before working on the script and acting side of things?

I think they both work alongside each other. The minute I get a script it is in your mind. All of a sudden the whole of the rest of the world looks like that world. The minute I got the script for this I started listening to as much country music as I could. I was filming in Belfast at the time and I would come over every second weekend to rehearse in a shed in North London with these amazing musicians. I had to figure out where this character’s voice was coming from because that for her was her purest point of expressing what she couldn’t say in her day to day life. Both her narrative story and her musical story kind of melded together.

Rose-Lynn is just an energic character, she is a firecracker. Were you exhausted playing  someone with that much
energy or do you naturally have a lot of energy like her?

She is gung-bloody-ho and she is infectious, you can’t not go with her because she catapults you along. I never knew where she was going to take me, but it was always wild. It was a tiring shoot, but I couldn’t help pouring myself into her. Even now when I gig it is impossible not to let go. She is running off very raw, emboldened, electrical emotional nerves, you have to go with it. But, yes, I took a long sleep after I finished it.

It has taken some time for your career to reach the point it is at now. Are you glad now that you didn’t win Andrew Lloyd Webber’s talent show “I’d Do Anything”? Do you think not winning has led you on a very different path?

That is up to life. I go into things and I try to bring as much dignity and try and learn from each thing as much as I can. It’s got its own course for you. I never really plan anything, I go off what I feel makes me feel happy or what I feel I can learn from or what I can give something back to people as well. I’ve had lots of really amazing little moments in my life which I hope will continue to happen. I want to be able to feel like this is a moment. I think each little step is a step in your life.

WILD ROSE is at Irish cinemas from April 12th