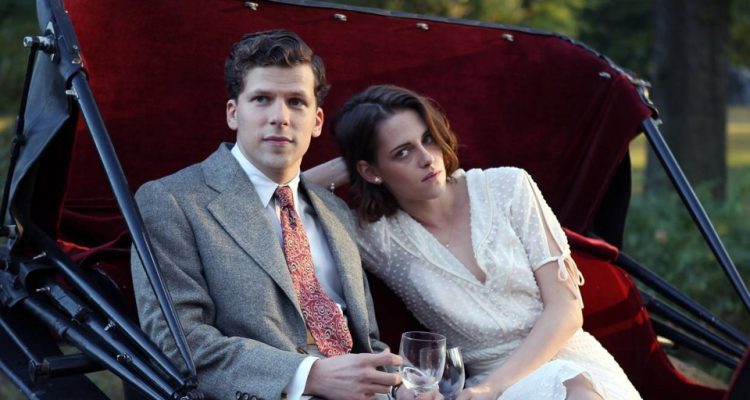 This week, Jesse Eisenberg reunites with director Woody Allen for ‘Café Society’. Set in the 1930s, Eisenberg plays Bobby Dorfman, a man who falls for Vonnie (Kristen Stewart), a young woman who is emotionally unavailable due to the fact that she’s already in love with someone else. Movies Plus caught up with Eisenberg to find out what it was like to work with Allen and Stewart again, his move to theatre in London, and his upcoming TV show.

You recently made your West End debut with ‘The Spoils’, which you also wrote. What made you want to go to the West End?
Nothing, they asked me. I would have gone anywhere. I love theatre in England; it’s the most unusual theatre scene. I would say it’s even more unique than New York because the English theatre scene has more interesting government funded shows. When a government is funding theatre they are able to do more bigger budget, more obscure theatre than when it has to be independently produced and they have to get stars to be in it. I was very happy to hear that they wanted to do my play, because I like doing the play anywhere; I would have gone anywhere but I feel very lucky that it’s in such a Mecca of great theatre like London.

Woody Allen is known for writing his actors letters, asking them to work with him. Did he write you a letter?
Yeah that’s what he does; he writes letters. Just one paragraph or just one run on sentence. For one of the greatest writers in the world he sent me a run on sentence asking me to be in the movie. It was so nice. I had worked with him in the past. He has such an unusual way of not only working on set but he has an unusual way of putting together his movies. Most movies, especially at the kind of budget level that he is working at – which is to say, an independent film budget – they spend a year trying to get famous actors to sign on, who could then get the European financing and American financing, whereas Woody knows that he is going to make his movie on this particular date, and he just asks actors to do it, and if they are unavailable he asks the next actor on his list, so it’s a very streamlined process.

You have worked with Kristen Stewart before – on ‘Adventureland’ and ‘American Ultra’. What was it like to work with her again on this movie?
It’s great. Kristen is the most unusual actress, she has such a lack of vanity that it’s almost comical. She would almost prefer that her scene partner excels, even at her expense sometimes. She would rather have her back to the camera than to be showy and beautiful; she just doesn’t care about that stuff. For a movie like this, a Woody Allen movie, where there is not much coverage, where most scenes are shot in one shot, in one angle it’s even more astonishing, because the scene in its entirety will be in the movie, so if we did a scene where I excelled or I had a good joke and she didn’t, she would go and tell the script supervisor – the one that makes the notes on the scenes – “Let’s use this take of the movie, it was better for Jesse”. This is the way she thinks. No-one does that… I mean, who does that, especially a beautiful young woman who is constantly told that they are so beautiful that they should be on the cover of magazines. She’s just the most unusual, least vain actress that you could find. It’s just a surprise.

Would you say that you modelled your character on the persona that Woody Allen showed in his films when he was younger?
No, if anything I try to consciously not do that. I try to consciously play my character as an emotional man, not a funny person, not self-aware. I try to play him naïve, not sly, I try to play him sincere, not sarcastic in an attempt to make the character my own. That said, it’s written by Woody Allen, it’s written in his style and his cadence, he’s standing a foot from me every day giving me direction so it’s probably impossible to not be unconsciously inspired or affected by him, even though I made every conscious attempt to avoid it.

This is the second time you have worked with Woody Allen after ‘To Rome with Love’. Was there anything different this time?
I had a bigger part so I got to spend more time with him, I got to talk to him. He doesn’t really like talking about characters and stuff, he just kept saying the same thing to me; in the first half of the movie my character is really naïve and nervous, and he just kept saying “In a few days we are going to shoot the later scenes, and you can’t act like that”. I said “I don’t plan on it, I am going to be different”. I think he was not aware that I was consciously making a choice to make the character naïve and nervous, I think he just thought that’s who I am. I don’t think he expected that of me, I think he just thought he was casting somebody to play themselves, but that’s not how I work. He’s seen me in my plays and I play versions of myself because I wrote them, so I don’t think he expected that.

There is a lot of talk of Woody always telling the tale of a younger woman falling for an older man, but somehow Vonnie feels a lot more empowered than some he has created in the past. Would you agree?
In this movie the more explicit decision of who to date comes from the female character; both men propose to her and she chooses one. I think in that way, she is empowered, at least with regard to the decision. [He] sees the world a certain way and I think the way Woody Allen depicts romantic relationships is so unusual that I don’t think you can attribute it to an older man and a younger woman phenomenon. He doesn’t appear, nor does he write characters that have gender specific masculinity; they are usually nervous, insecure, contemplative men, so I don’t look at the breadth of his work and think his romantic relationships have this strangely disproportionate age gap. This is a man who is not depicted in any kind of gender normative, masculine, hetero normative relationship; he appears to transcend that in a way.

‘Cafe Society’ is released in Irish cinemas on September 2nd 2016