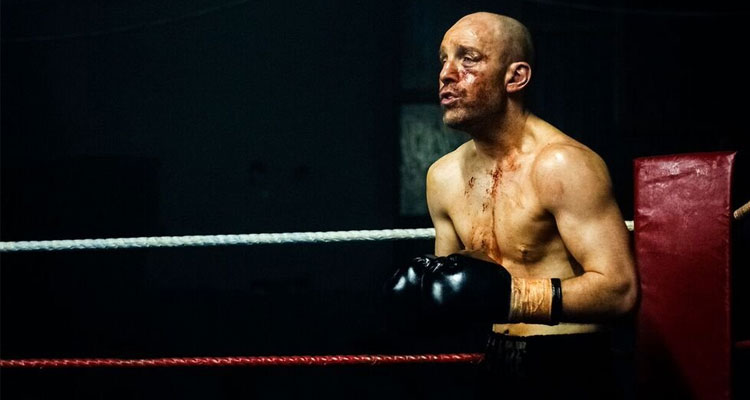 JAWBONE (UK/15A/91mins)
Directed by Thomas Napper. Starring Ray Winstone, Ian McShane, Jonny Harris, Michael Smiley, Anna Wilson-Hall
THE PLOT: Jimmy (Johnny Harris) is a boxer who is on the wrong side of 40. A former alcoholic, he hit rock bottom a year ago and is slowly trying to claw his way back to his younger glory days. Returning to his native London, he tries to re-connect with the two boxing mentors that coached him – tough but sympathetic boxing club owner Bill (Ray Winstone) and his no-nonsense trainer Eddie (Michael Smiley). However, Bill warns him that any whiff of drink or attempted luring of the younger boxers into the underworld of unlicensed boxing will see him being kicked out. When old friend and boxing promoter Joe (Ian McShane) offers Jimmy a chance at an unlicensed fight, Jimmy will have to shape up if he’s going to survive…
THE VERDICT: ‘Jawbone’ is clearly a labour of love for London-born Harris. The multi hyphenate not only stars in the film, but also writes and produces. It’s a film of firsts, as not only is it Harris’ first screenplay, it’s also the directorial debut of Thomas Napper, who has worked as a second unit director for nearly 20 years. Given the potential for it to all go wrong and just be another random Brit flick, ‘Jawbone’ wisely dodges the potential pitfalls and instead concentrates on building a strong character portrait.
Harris’ script is sharp and pared down to the bone, mercifully shearing away any sentimental boxing sub-plots like an estranged ex-partner and child. It’s enough to suggest that Bill and Eddie are family, though Jimmy is very much living on the rugged kindness of these two characters. There’s a lot of history between this trio and there’s also a sense of sadness as to how far Jimmy has fallen. Homeless and tempted by drink, Jimmy is a combustible character at times – a Raging Londoner of sorts. That’s not just a character flaw, but unfortunately a flaw in the script. Harris does more than enough to say that Jimmy is smart, but yet Jimmy keeps making the same mistakes. A more rounded character arc would have been welcome here.
That said though, there’s a lot to admire in this gritty, low-budget debut. Harris gives a strong, bruising performance that gets you on Jimmy’s down-on-his-luck side early on. It’s a very physical performance that doesn’t even need a boxing match to suggest how damaged this character is, both internally and externally. Winstone and Smiley are reliably stalwart in roles that could have reverted to boxing movie stereotypes in a lesser film. Napper’s direction is unflashy and is all the better for it, preferring instead to get his camera in close with the characters. ‘Jawbone’ doesn’t try too hard to impress, preferring to go for a low-key right hook. Not quite a knock-out, but it does have its moments and a star-in-the-making in Harris.
RATING: 3.5 / 5
Review by Gareth O’Connor