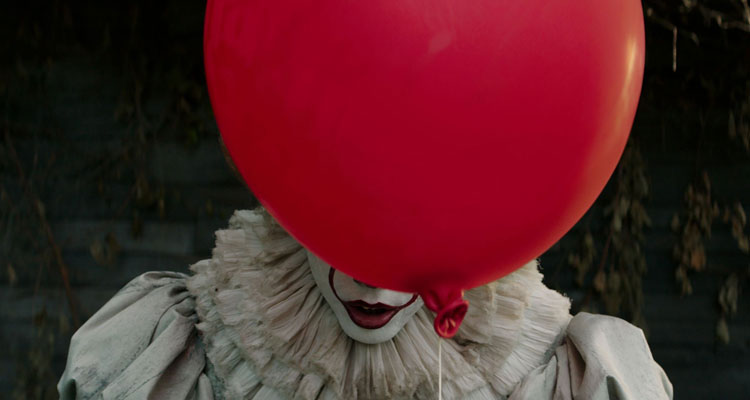 IT (USA/16/134 mins)
Directed by Andy Muschietti. Starring Bill Skarsgard, Jaeden Lieberher, Sophia Lillis, Finn Wolfhard, Wyatt Oleff, Jack Dylan Grazer, Jeremy Ray Taylor, Chosen Jacobs.
THE PLOT: Summer, 1989. Derry is not like any other town. Children go missing every 27 years and are presumed dead. Teenager Bill (Jaeden Lieberher) is still mourning the loss of his young brother Georgie the previous autumn. Then he starts seeing a spooky Georgie and a malevolent clown known as Pennywise (Bill Skarsgard). His friends Richie (Finn Wolfhard), Eddie (Jack Dylan Grazer) and Stan (Wyatt Oleff) have had different yet similar experiences with the shape-shifting Pennywise. They’re not the only ones – new kid Ben (Jeremy Ray Taylor), bullied kid Mike (Chosen Jacobs) and the troubled Beverly (Sophia Lillis) find common bonds with the others. They will have to confront this evil presence in their town – but only if they’re together and can face their fears…
THE VERDICT: Stephen King’s 1986 book ‘It’ is one of his best, most chilling novels. Spanning multiple characters over decades, it played on childhood fears of clowns and the unknown. A 1990 TV mini-series fronted by Tim Curry’s memorable Pennywise terrified a generation. Now the first half of the story has been adapted for the big screen, after a long and protracted birth that saw ‘It’ change scripts and directors. Is the end result just a re-heated rehash… or the second coming of Pennywise after an appropriate gap of 27 years?
The answer is resoundingly in the latter category. This version of ‘It’ retains the palpable, nerve-shredding fear and tension of King’s novel, while also being visually and narratively inventive enough to distance itself from the mini-series. Think of this ‘It’ as another take on the material, rather than a remake. With 134 minutes to play with, director Andy Muschietti has more time to set up the younger versions of the characters and explore their home lives in more detail. While Bill and Beverly are the key characters, each of the kids gets their moment to shine. The young cast do an excellent job here. Having worked with spooky kids on Mama has paid off for second-time director Muschietti. He coaxes very natural performances from them and their onscreen chemistry and camaraderie is very apparent. The shift in time period from the 1950s to the 1980s works well too, re-telling the story for another generation.
The other crucial element is Pennywise, the most common form of the presence known as ‘It’. Inevitably, Bill (son of Stellan) Skarsgard will be compared to Tim Curry. However, Muschietti and Skarsgard have wisely chosen not to copy Curry (though look closely in one scene and you’ll spot a brief tribute). Instead, they’ve tried a different angle on the character in the same way as Heath Ledger did with The Joker. This Pennywise is less chatty and sinisterly playful. He’s more of an anarchic, malevolent presence. Mix in a a touch of Beetlejuice with incredibly sharp teeth and it’s an unsettling physical performance.
Muschietti uses the big-screen canvas to portray Pennywise’s dank underground world with more visual invention. The sight of dead children floating in the air is a stand-out, as is the infamous bathroom sequence with Beverly (Muschietti takes it to another level). The only disappointing aspect is that we could be in for a long wait for the adult-set second half. In a sign of current Hollywood caution, the second half going into production all depends on the first half’s box office returns. Not a frame of the second half has been shot, but the script is ready to go. Warner Brothers need not worry. This version of ‘It’ is a sure thing. It’s confidently directed, well acted and proper scary. ‘It’ will once again do for clowns what ‘Jaws’ did for swimming. Be afraid, be very afraid…
RATING: 4 / 5
Review by Gareth O’Connor