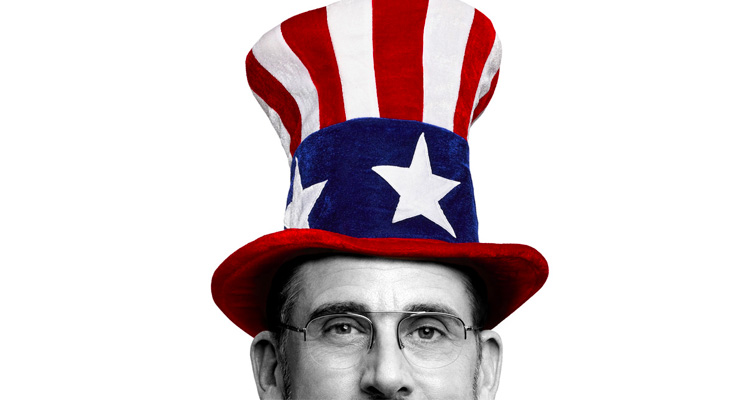 The Plot: Nursing their wounds from the 2016 Presidential Election defeat, the Democrats are looking to regain some ground in the heartland of America. Democrat strategist Gary (Steve Carell) heads to the rural swing state of Wisconsin to approach former Marine Colonel Jack (Chris Cooper). With Jack having given an impassioned speech at a town hall meeting, Gary spots something different in this salt-of-the-earth Democrat that could appeal to the hearts and minds of the townsfolk in the upcoming mayoral election. Gary brings along his team who soon cause a media storm around the town and back home in the snake pit of Washington DC. Soon enough, Gary’s opposite number Faith (Rose Byrne) arrives in the town to keep voters on the Republican side. Let the political games begin…

The Verdict: Irresistible begins with a cannonball being fired straight into the stomach of a man (Uncle Sam?). Such was the shock result of President Donald Trump’s success four years ago, winning the electoral college vote if not the popular vote. This being an American election year again, out come the political satires – and who else but satirist and political commentator Jon Stewart to stir things up? If you’re expecting a sharply observed and serious satire about what happened in 2016 and the fallout from it, then it’ll become obvious soon enough that you’re tuning into a different film. Irresistible is more frothy, lighter fare which plays off the powerful moneymaking machine of American electioneering against straightforward country folk who just want a mayor to represent their best interests.

There’s more than a touch of Frank Capra here, making it a reverse Mr Smith Goes To Washington mixed in with the classic British Ealing comedies involving small country folk with big ideas. Stewart’s script has a grain of truth to it too – it’s partly inspired by a 2017 special election in Georgia which saw both parties spend north of $55m combined in campaigning. With such vast sums of money being spent, electioneering is science as well as showbiz. Stewart alludes to this amusingly as Gary’s team tracks specific groups of voters and carpet bombs them with info – with mixed results. US politics and electioneering can often be impenetrable to non-Americans (how on Earth did Trump get elected anyway?). Thankfully, Stewart dilutes the more labyrinthine aspects of American electioneering and thereby make it more palatable to an international audience. Amen to that.
Boiled down to the basics, it’s a story of rival factions converging on a small rural town that has seen the ravages of the 2008 recession and then observes events unfold as they try to upstage each other. While there isn’t a huge amount of depth in these characters, they are sketched enough to be distinct. Gary is the seen-it-all strategist who knows how to play the game until it’s won or lost. Faith is the ruthless, go-getter rival whom he has sparkling attraction to (naturally). Carell and Byrne, both gifted comedians as well as dramatic actors, can play these kinds of roles in their sleep but they bring a natural charm to these arch rivals. The ever-reliable Cooper brings his sturdy presence and gravitas to the role of a man who rises to the challenge of standing for change. Is the script sharp enough though to fully serve their talents though?

While Stewart’s script has several laugh-out-loud moments and an easygoing tone, there is a lack of dramatic tension throughout the piece. A lot happens, but nothing of any great significance to propel the story forward to where it needs to be. Shouldn’t a story like this be just a bit more edgy, a bit more daring? Has Stewart lost his bite or is he softening over time? Maybe, but there’s still much to enjoy here including the final reel which pulls a rabbit out of a hat (of sorts) to make a statement about how this electioneering game really works. A central trio of good performances help the film coast along. Irresistible doesn’t quite live up to its title, but it does enough footwork to earn your VOD vote when it comes to deciding what to sit down and watch.

In short: Earns a vote