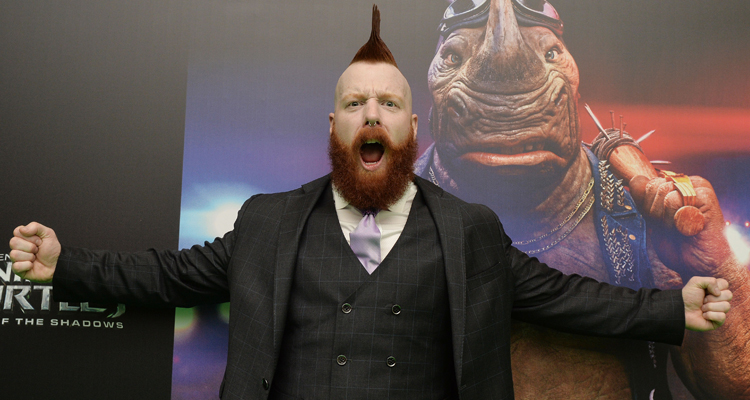 WWE Superstar Sheamus (Stephen Farrelly) was back home in Dublin for the Irish premiere of Teenage Mutant Ninja Turtles: Out of the Shadows this week and Movies.ie caught up with him for a chat. Stephen Farrelly (Rocksteady) is best known to his fans worldwide as WWE Superstar “Sheamus,” whose red-hot temper matches his fiery head of hair. Hailing from Dublin, the ginger-headed juggernaut brings a ferocious offensive style to the ring that harkens the image of his noble and heroic Celtic ancestors. Farrelly grew up in the inner-city and often found himself defending his smaller friends from bullies. He excelled at Gaelic football, soccer and rugby and took to weight lifting with his father, who would bring him to amateur bodybuilding competitions. He set a goal to bring a true taste of Irish heritage, with its rich history and folklore of fierce warriors feared by their opponents, to WWE. As Sheamus, Farrelly sees himself as a modern incarnation of those powerful fighters and has become one of the hardest working Superstars in WWE today. Sheamus is a four-time WWE World Heavyweight Champion, the 2010 King of the Ring, a two-time United States Champion, the winner of the 2012 Royal Rumble — an honour which paved the way for him to defeat Daniel Bryan in 18 seconds at WrestleMania to win the World Heavyweight Title — and the winner of the 2015 Money in the Bank contract. The list of Superstars he’s pummeled is long and reputable: John Cena, Randy Orton, Big Show, Daniel Bryan and Triple H. Always up for a challenge, Farrelly has entered the arena of the acting world and will plays Rocksteady in Teenage Mutant Ninja Turtles: Out of the Shadows.

TEENAGE MUTANT NINJA TURTLES Out Of The Shadows is now showing