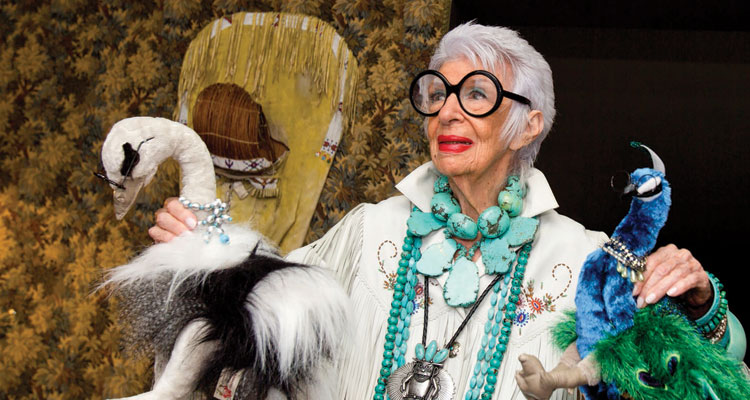 IRIS (USA/Club/80mins)
Directed by Albert Maysles. Starring Iris Apfel, Carl Apfel.
THE PLOT: Albert Maysles’ penultimate film focuses on the day to day life of legendary New York fashion icon Iris Apfel, as she continues to work at the age of 90.
THE VERDICT: Iris Apfel is an inspiring woman; full of life and joie de vivre in her 90th year, she is endlessly quotable and full of passion for fashion and design. A wonderful subject for a documentary, Iris appears more than happy to talk about her early life and career as Maysles documents her daily life.
The film is more concerned with Iris as she is now, rather than being a retrospective of her career, but does give a cursory glance into the past in order to give the film context and depth. Iris has had a remarkable career as an interior decorator – even furnishing The White House on a number of occasions – and has now become a fashion icon in her own right. Maysles follows Iris as she goes on talk shows, fashion shoots and public appearances, as well as documenting her shopping, her wardrobe and her recent decision to start giving her massive collection of clothing and accessories away.
The film shows Iris as a woman still living her life, and loving every moment of it, but it is clear that she is a shrewd woman and a force to be reckoned with. This is never explicitly explained in the film, as Iris comes off gentle and sweet, but the fire that made her such a respected person in the fashion world is hinted at throughout the film.
Although the film is sweet, engaging and very funny at times, it does feel rather slight in places, as the back story is limited. That said, there are many poignant moments, as Iris explains she broke her hip without telling her husband of 66 years (‘he would flip!’), as she combs through the pieces she is giving away to the Peabody Essex Museum in Salem, and as she goes through a storage unit to find things to sell off. It is clear Iris is aware she cannot live forever, and these moments are dealt with very carefully.
In all, Iris is a fascinating, funny and engaging subject for a film, and it is a joy to follow her through her days, and allow her to tell us about her past, but there are times where the film feels rather slight, and determined to only show one side of its subject. Still, IRIS is a must see for those with a love for fashion.
RATING: 3/5
Review by Brogen Hayes