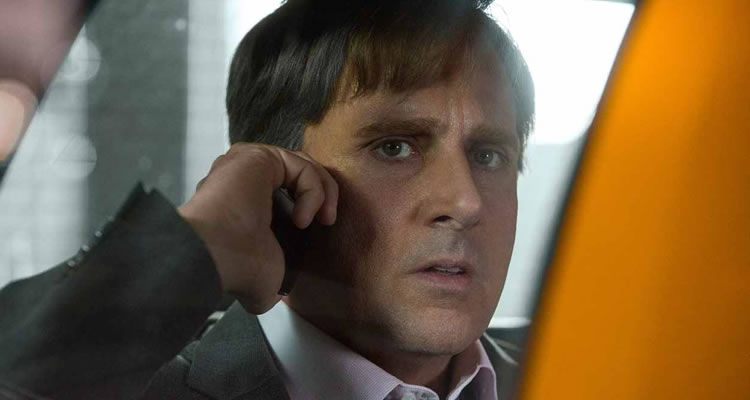 Interview with Steve Carell for The Big Short

In ‘The Big Short’, Steve Carell stars as Mark Baum, a Wall Street contrarian who, with a small band of less-than-merry money managers, bets against conventional wisdom when he foresees the impending collapse of the US housing market in 2008.

Based on the bestselling nonfiction book by Michael Lewis (“The Big Short: Inside the Doomsday Machine”) and directed by Adam McKay, the film places Carell at the centre of one of the year’s most stellar ensembles, featuring Christian Bale, Ryan Gosling and Brad Pitt, as a group of financial outliers, each independently betting against the market. ‘The Big Short’ has received five Oscar nominations, including Best Picture and Best Director for Adam McKay, and is currently showing in Irish cinemas.

We caught up with Steve Carell to talk financial collapse, co-stars and what it was like to work with old friend and colleague Adam McKay on his first dramatic film.

What initially attracted you to ‘The Big Short’?
Steve Carell: The subject matter was intriguing, eye-opening and terrifying. The cast was a group of actors that you just want to be working with. And Adam McKay… I’ve known him for a long time. I think he’s incredibly smart and funny. And I knew he would do something very special with this story.

The character, you play, Mark Baum, is loosely based on a real life figure?
SC: Well, more than loosely based. The name was essentially changed. But his look is based on this real life person, and the character’s personality is derived from this guy. You know, he runs a hedge fund. He’s very opinionated; kind of a pit bull (laughs)… He does not suffer fools gladly. He’s someone who I think was, at the time, adamant about pursuing the truth and finding out what was actually going on with these big banks.

Did you meet him?
SC: I did. I spent some time with him and he came to set a few times as well. And he was clearly the person that we all thought he was going to be. When he arrived on set, within minutes, he’d ensconced himself by the monitor. He was giving Adam McKay notes. He was giving me notes. He’s a very confident guy without being arrogant, without being off-putting in anyway [laughs]… And incidentally, all of his notes were great. He’d never been on a movie set before, but he had an instant affinity for it.

How much did you know about the financial crisis of 2008 going into the film?
SC: I didn’t know much about this world. I think I knew about as much as most people knew at the time of the collapse. To prepare, I read Michael Lewis’s book and studied the terminology. Adam McKay was also a well of information as he truly understands the complexity of this world. As a director, he also likes to have improvisation on his sets. In order to do that we all needed to really understand what we were talking about.

Your relationship with Adam McKay goes back quite a way.
SC: I think we met in 1990. He was in a touring company with my wife [Nancy Carell], who was my girlfriend at the time. But I didn’t work with him probably until 1995. We did a show that he’d written at Second City that then went to the Kennedy Centre for a month or two; I performed in it there. So we’ve been friends for a long time. And then I finally got to work with him again on ‘Anchorman: the Legend of Ron Burgundy’. I’ve always known him to be an incredibly smart, funny, passionate person. So he seemed like a perfect choice to direct this movie.

What do you think made him the right man for the job?
SC: In order to convey the density of material that needs to be conveyed in this film, it needed someone with an absurdist sensibility. He has that. And he also has a great handle, intellectually, on this world. Those two things in harmony made him the right choice to direct it. Added to that was his inherent outrage over the events that had transpired. There was a purpose to the movie for him. There were questions to be asked. That sense of passion was really the engine behind it.

He also took an alternative approach to shooting the film itself, I understand.
SC: It was an interesting way to work as an actor because you never had a sense as to where the camera was pointed. You could be doing a scene and realising at the end of it that the camera had been pointing at someone’s hand writing on a piece of paper [laughs]… It was sort of freeing in the sense that you never got an idea of when the camera was pointing at you or anybody else. The result was that you forgot that the camera was there and it was more like doing a play. It kind of took the pressure off.

What was it like re-teaming with Ryan Gosling? Is it different working with him in a drama like this, than a more comedic film like ‘Crazy Stupid Love’?
SC: Well, he just makes me laugh whether it’s a drama or a comedy. And I think he’s extremely funny in this movie too. I love him. I think he’s a fantastic actor and an extremely kind person. He’s one of my favourite people, period.

What was the biggest challenge in making the film?
SC: Probably learning the lingo. It’s not the way normal people talk. The language and concepts behind the banking industry were very foreign to me.

And apparently quite often purposely so.
SC: Early in the movie, Ryan Gosling’s character turns to the audience and essentially says, ‘You’re confused, aren’t you? This is making you feel stupid. Well, it’s designed to make you feel stupid. The banks have created this language in order to keep you from questioning what they’re doing.’ I think there is a truth to that. It’s ultimately not that complicated… When you break it down as Adam does in this movie, it makes it accessible.

What was the most surprising thing you learned?
SC: The level of fraudulent behaviour that was going on. I think most people knew there was a collapse and a bailout – obviously, countless people were impacted by it. But beyond that I didn’t have any real idea as to what these banks were up to. The level of deception that was going on. It was shocking and enlightening.

Do you think we’ve learned from our mistakes?
SC: I’d like to think so. But it seems that not much has changed since then. I think in that way the movie is a cautionary tale. It would be nice if there were lessons learned. But when you talk to the guys who were there, when you talk to the real life counterparts of these characters, they’re all still very angry. You can sense it. There’s a palpable distrust, I think, and an indignation that nothing changed and that no one was held accountable.

What do you make of the response to the film itself, so far? It recently received four Golden Globe nominations, five Oscar nominations and is enjoying glowing reviews in the press.
SC: I still can’t believe the movie is even out. I can’t believe that people are seeing it, because it feels like we just filmed it. We made the movie in the spring. Apparently it was edited in about five weeks, and began screening shortly after that. That part of it is shocking to me… But I guess what strikes me most though is that at these screenings people seem to be lingering afterwards and talking to one another about it. It’s stirring people up a bit. I think that’s very unique and kind of exciting that it’s starting a conversation, because I feel like that rarely happens.

‘The Big Short’ is out in Irish cinemas now. Watch the trailer below…