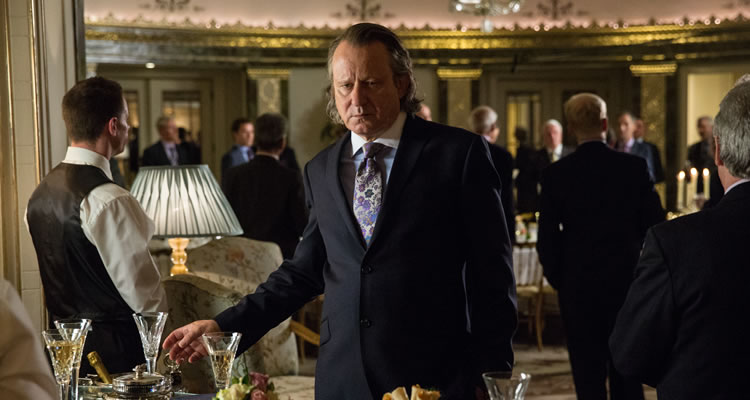 Interview with Stellan Skarsgard for ‘OUR KIND OF TRAITOR’

This week, Stellan Stellan Skarsgard stars in ‘Our Kind of Traitor’, released in Irish cinemas on Friday May 13th. In this film based on a John le Carré novel, Skarsgard plays Dima, a Russian gangster who is, in fact, a desperate man. With a new guard taking over in Moscow, he
is certain his own life and those of his extended family are at risk. On an impulse, he turns to Perry (Ewan McGregor) to convey a message to MI6, that in return for safe haven, he will supply them with prize intelligence on high-ranking British politicians and their illicit dealings with the Russian mafia.

Movies.ie caught up with Skarsgard to find out more about the tense thriller, ‘Our Kind of Traitor’ and working with director Susanna White.

How would you describe Dima? He’s a complicated man.
Stellan Skarsgard: I was interested in where he came from, this very brutal harsh background that he had. He grew up during communism, but as a criminal. He grew up in jail more or less, under very hard conditions. And then after 1989, when the most brutal capitalism exploded in Russia, and some people became more nouveau riche than any nouveau riche ever, he entered the banking world as a money launderer. I was fascinated by the conflict between the enormous wealth and the rather simple background he had. And what that did to a man. Also he is a genius, he must be autistic or something, the way he remembers numbers. So it was, to me, a wonderfully surprising character in many ways.

Dima has no qualms about taking down people who get in his way, was that something that interested you too?
SS: I have also tried to see his morals. Killing is not a big deal for him — it is something you do. That is where he comes from, and I wanted to embrace that background in him. There was one line I liked a lot, when he says that he killed someone who was a KGB agent who was f***ing his mother over and over again and beating her. Then he says, “It was my mother, you know? You get sentimental.” He had, in a way, the wrong words for that action. Which reflected where he came from.

How enjoyable was it to have so many colours to work with within one character?
SS: Normally, I am known to underplay all my characters, but here I had the chance to do some very big and exuberant acting. And I enjoyed it immensely. The complexity and the contradictions within him, that is always what interests me about human beings. And also the ambiguity he presents to the audience: is he a good guy or a bad guy? Like most of us, he is both. His choices in life are sometimes choices that have been made for him by circumstances, like for most of us. But his are different from most of us!

How do you go about creating a character?
SS: I always try and figure out what kind of film it is, and what does it need from me. It is very pragmatic. Then balancing things, so that he is not just over the top. I am interested in showing a different culture. We have a tendency, especially in the movie world, to portray anyone who isn’t from the West, and doesn’t obey those rules, as kind of weird, or a bad guy. I want the audience to like him, although he is brutal.

Do you think Dima misses the old days of communism?
SS: I think le Carré might, because the book is written like a Cold War story even if it is transplanted into modern conflicts. I think Dima has been very happy, he has had great successes, he lives well, and enjoys his tennis, and enjoys his parties, and being able to take care of the family.

What does Dima see in Ewan McGregor’s character Perry that he thinks can help him?
SS: His selection process for this courier is not very sophisticated — he was the only guy in the restaurant. Dima was desperate, and he tested him by playing tennis with him and by inviting him to a party, but I also think he sees the decency in him. That is all Dima needed. But, of course, it grows throughout the film. It grows into something bigger like a friendship. That is an interesting progression. The first meeting is probably quite cynical from Dima’s perspective: I need a mule to carry this stuff into England. But Perry grows on him, because he is a truly decent person. He’s got some marriage problems there, but that doesn’t make him unique. Dima really wants to get his family out of the way, he doesn’t care that much about himself. It’s not a big deal. His entire life has been living close to death, and being prepared to die. But you don’t want your family to get hurt. He is very traditional in a way, he’s a patriarch looking out for his family. But it is also his emotional ties. There is something really beautiful about his love for his wife and her love for him. Saskia Reeves plays her with almost no words at all but in a beautiful way.

Did Dima surprise you at all?
SS: His vulnerability surprised me, I thought he would show less of it. But it started pouring out of him. I don’t think it was even a choice, the character had just reached that point. It is late in the film when all his protection is down. And Perry is the closest he has to a friend, and then his guard is totally down.

Was a Russian accent easy to master?
SS: I would prefer to say it comes from a very small town close to Kazakhstan. In case anyone complains about it. I worked on my accent with dialect coaches, and I had Russians do my lines and I mimicked them. Once we started shooting, I didn’t care too much about it. Sure, there might be people who say, “That is not accurate Russian.” But it’s not from Moscow, but it could be from somewhere else in Russia. But it is not important. He comes off as a Russian.

Were you a fan of John le Carré’s books?
SS: I read my first le Carré, which was ‘The Spy Who Came in from The Cold’, when I was 13. My father handed it to me. It was the first adult book that I had read. Which was, of course, a shock — this was the way the world is! Very dark. I loved it of course, and I’ve read almost everything he has written. I was so taken by the sadness in it. All le Carrés have this sadness over how the world works, and how things are for people. It is a beautiful, very romantic sadness in a way. But it is, nevertheless, true. That is what I like about his books that they are all coloured by this melancholy.

Did you get to meet le Carré?
SS: I was invited to his London home. He knew me, I’ve made about a 100 films so he must have stumbled across some of them. And he comes running down the stairs — and he’s not a young man anymore — but his brain is that of a young man. We had a lovely afternoon with good wine and talked about politics and life in general. He’s extremely contemporary, and aware of everything going on in the world. Thanks to my father giving me that bloody book when I was 13, he was of course, an idol. I was slightly star-struck, which I never am normally. But it was a true pleasure, but I had to get a first edition copy of ‘The Spy Who Came in from The Cold’ and have him sign it as a tribute to my father.

Would you say ‘Our Kind of Traitor’ is a classic le Carré story?
SS: In some ways it is a little more of a simple construction than many of his books, in terms of the plot. But it has the quality of all his books, the beautiful sadness is there. Unfortunately, the film is an accurate description of the world. Like all his later novels, this is about dirty finance at a high level, and how it is married to legitimate finance.

What was Susanna White like as a director?
SS: I enjoyed very much working with her, because she is not only a lovely person, but she is very smart. She worked with my son on ‘Generation Kill’, which is one of the more masculine projects you could imagine, with actors and real marines in the desert in Africa for six months. So it is not a frail little flower that is thrown into the machinery. I really have respect for her. Every film has to come out of the brain of the director, it has to be subjective to be interesting, and I think she has done the film that she wanted to make.

‘Our Kind of Traitor’ is released in Irish cinemas on May 13th 2016. Watch the trailer below…