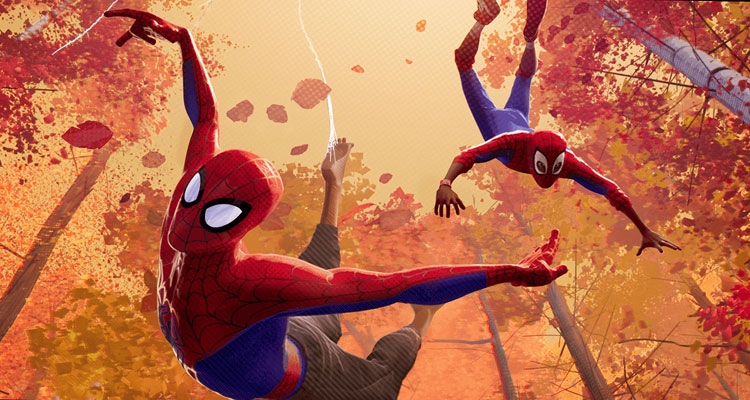 ‘Spider-Man: Into the Spider-Verse’ is a new animated movie with a ground-breaking visual style opening in Irish cinemas on Dec 12th. The film introduces Brooklyn teen Miles Morales & the limitless possibilities of the Spider-Verse, where more than one can wear the mask.

We caught up with directors Peter Ramsey & Rodney Rothman for a behind the scenes chat.

It’s been 3 years since production began, what has it been like bringing Miles & the Spider-Verse to the big screen?

PM – Wow, haha epic. We’re tired man, we’re tired. It’s actually been incredibly rewarding and inspiring because virtually everyone on this movie, everyone is an artist in one way or another so seeing the efforts of all those people wedded to a pretty powerful vision that started off with Phil Lord’s original treatment and the early phases of the script has been a real adventure and it’s been tough. It’s been a lot of work but as we get closer to being able to really show it to people it’s all coming home just how amazing it is to see all these people pulling for the same thing and the results kind of bearing fruit.

RR – From a writing perspective, it’s been phenomenal for me. I’ll tell you one thing in animation a lot of people are writing, in every area, people are writing. So that’s honestly been amazing. It’s been so amazing being integrated into a larger organism that’s all pulling for the same thing. Another great thing about animation is an extraordinarily visual medium. As much as I like writing my funny little witty lines the movie wouldn’t work if that’s all it is. Most of the time we’re pulling stuff out of the movie that I wrote because we can say it better visually

The movie has the largest animation team ever, with over 140 animators what was that like to corral?
RR – It comes down to trust because you can’t control 140 people you have to hire well and trust in the team. It’s like playing with a symphony where no one has sheet music in front of them they just have a picture of what the music is supposed to look like.

How many drafts did you go through before you came to this specific story about the Multi-Verse and the Spider-Verse?

RR – At the beginning when Phil (Lord) and Christopher (Miller) first got involved their prerequisite for getting involved was that it was about Miles Morales, the Spider-Verse aspect I think came in, if not then, shortly afterward. So that’s been there three or four years. The answer to how many drafts of the script there are – is infinite… The script has been a living organism and it still is to some extent even though we’re almost done with the movie we’re still adjusting certain things.

PM – It’s a constant process of honing in on one thing, chipping down the statue to get to the statue underneath.

How many different iterations of characters and teams have there been because we’ve been teased 4 or 5 different types of spider-people?

RR – As far as who’s in the movie, there are some surprises. Who’s in the movie really developed from the fact that at the centre is Miles. It developed from us thinking about who would be interesting foils for Miles? So Hobo Spider-Man, I’m going to call him 40-year-old Peter Parker because not only were we thinking it would be fun for the audience to see what Peter might be like 20 years down the road we thought he would be an excellent foil for Miles because he’s only starting out. He lives in a world where Spider-Man already exists and is basically a rock-star and Miles in getting these powers is asked to step into the shoes of a hero of his.

So it was fascinating to see someone who is starting out and someone who is maybe questioning why he ever wanted to be Spider-Man. Spider-Gwen is around the same age as Miles, a few years older but far more experienced, far more capable and confident and so there too was an interesting foil for Miles and so on and so forth. That’s why they’re in there. As I said before there are a few surprises and a few fan favourites that may or may not be in the movie but our hope is if the film is successful we’ll be able to show off more of these worlds.

Where would you guys like to see Miles go in the future? Would you want something in his world? Or could this story turn into an anthology?
PM – It’s interesting once you introduce the idea of the Spider-Verse and meet some of these characters it’s really hard not to imagine there’s not going to be all sorts of different characters if you want. I think our hope is that the audience connect with Miles and really follow his journey. I’m interested in seeing what he becomes as he gets older and grows into the role.

RR – Whatever happens, is going to be organic. I will say we’ve really enjoyed challenging ourselves with the animation techniques we use and how far we push things.

You’d had the chance to screen the movie at recent Comic Con events, what was it like showing footage to the audience, because I heard there was quite the uproar?

PM – We’ve been working on this these past 3 years slaving away and to finally give birth to the baby after 3 years of being pregnant is pretty fantastic.

RR – Yeah this is a movie we hope will travel the world and resonate and connect with people. It was designed to do that. Having said that there’s a whole bunch of things in the movie that we imagined showing it at that kind of venue and to those kinds of fans.

SPIDER-MAN: INTO THE SPIDER-VERSE is at cinemas from Dec 12th