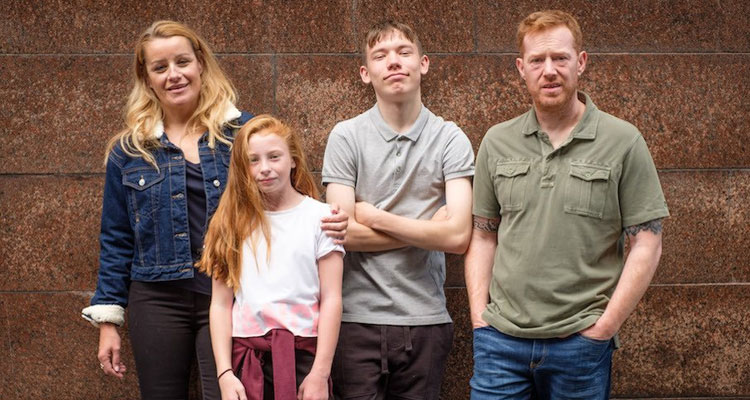 INTERVIEW with SORRY WE MISSED YOU writer Paul Laverty

From director Ken Loach, writer Paul Laverty and the award-winning team behind I,DANIEL BLAKE, comes SORRY WE MISSED YOU. The film, starring Kris Hitchen, Debbie Honeywood, Rhys Stone and Katie Proctor, tells the story of Ricky and his family who have been fighting an uphill struggle against debt since the 2008 financial crash. An opportunity to wrestle back some independence appears with a shiny new van and the chance to run a franchise as a self-employed delivery driver. SORRY WE MISSED YOU is a powerful exploration of the contemporary world of work, the gig economy and the challenges faced by one family trying to hold it all together.

We caught up with writer Paul Laverty to discuss the film…

You have tackled many social issues over the years, why did you decide now was the time to tell the Turner family’s story?
When we did I, Daniel Blake we spent a lot of time going up and down the country [England] visiting food banks and hearing people’s stories. We discovered that so many of the people using the food banks were the working poor. The statistics are the same across the UK and in other countries as well. In the old days you got a job, you may not have been wealthy, but you were able to manage. Now people can’t. The system isn’t working anymore.  People like our couple in the film are the working poor. Ricky is tied to an app that controls his working day, Abby is tied to a zero-hour contract and their life is complicated by being of an age that meant they were caught up in the economic crash. They weren’t able to get on the property ladder. Now they are 40 and they are stuck in the rental system where there is a shortage of properties and rent costs are high. Everything conspires against them and makes life hard for their family. What’s the point of work if it doesn’t let you support your children? We want to explore in intricate detail the effects this has on a family. You have a teenage boy, a little girl, a mum and a dad and we see how modern life treats them. We see what it’s like when trade unions don’t exist and everyone is ruled by technology – like Ricky who can’t work without an app, and Abby is constantly being contacted on her phone. We explore how language changes – Ricky is no longer an employee. He is an owner, driver, franchisee. It sounds great at the start, but it means all of the risks are on you. They sell you a story of being able to work and be your own boss but the reality is different. Drivers are pushed to the limits by terms and conditions. Everything is controlled by an app that dictates where they should be and when. We wanted to look at how technology controls our lives. There is a crisis happening right now and the film taps into that.

Research is a massive part of your process and you didn’t just talk to van drivers; you went out with them on delivery rounds. What was that like?
You can’t copy a screenplay from the street. If you want to tell someone’s story you have to fully understand them and their job and the processes they go through. Real people give you the ammunition to tell their story. It was harder to find people willing to talk than it was for Daniel Blake. People were so tired; they were on the road. They don’t have trade unions where you could go to interview people. The only way was to go to the depots. I got to know some of them well and I persuaded them to let me go out in the vans with them. I saw how tired they were after 10 hours or more of driving. Their backs were bad, their eyes were wrecked from concentrating on the road for all that time. I was with a driver when we almost got into a car accident. It was early in the morning and he was able to swerve to avoid a crash. He said if it had been later in the day, he would have been too tired to react on time. The drivers all want to be in first in the depot to load up, the first to load up have the most time on the road to deliver so there are drivers who sleep in the car park outside their depots. Drivers don’t have the time to go to the toilet so they are going in bottles in the van. They are under massive stress. It was easier to find carers to help tell Abby’s story. They still have trade unions. I heard some horror stories. Many carers have had to leave their jobs because they can’t afford to keep working as carers. They pay for their own travel. We see Abby in the film going from patient to patient and travelling by bus to get there. Patients live miles away from each other and carers are expected to get to each house which could mean several bus journeys in one day and they have to pay for each bus fare themselves. They take care of people from early in the morning to late at night and only get a limited amount of time with each person. What a way to take care of our old people. I spoke to one young carer who got 37 calls and texts to come into work and this was on her day off. There aren’t enough carers and the ones we do have are massively overworked and terribly underpaid. The film touches on so many things that are wrong in our society.

There is so much humour between the characters, much more so than in I, Daniel Blake. Was it important to use humour to separate it from Daniel Blake?
Aye, when people come together there is always laughter, even in tough situations. People are funny and mischievous, and frustrated, and angry. We see Ricky ground down, but we see flashes of what he could be if he wasn’t stuck like a mouse on a treadmill. He is a funny guy; he loves to banter so by showing this we see what Ricky used to be like. Now he is tired and frustrated, his light-hearted side is still there, but it’s mostly hidden. This is a good family, a normal family but they have been ground down by the economic system. They are exhausted. They don’t see their children.

You have so many good actors in the film, but Katie Proctor who plays the youngster child Liza-Jane is an amazing young actor. Her storyline broke my heart. What was it like working with new talent?
She is so good; she is such a bright young actor. Filming one particular scene was heart-breaking. You’d need a heart of stone not to feel for her. The lines were there, but it’s her performance that makes it. Her story, in particular, reminds us that there are so many young children affected by their parent’s working hours. People have to work maximum hours if they have any chance of making ends meet, let alone make a profit from it.

You and Ken work with a mix of actors, some who are experienced and others who have never worked before. What does that mix bring to your films?
Ken always says we have to find people who can best give life and blood to the characters as imagined in the screenplay. Sometimes we are blessed to work with very experienced actors like Cillian Murphy in Wind That Shakes the Barley and other times we find people who haven’t acted before. That mix is great because the actors we choose are always the people who are best for that particular film. I work with Ken picking the actors, choosing the locations to shoot and working out what is best for the film. You want a script to fill lived to make a film feel lived in which is why you hand the lines over to the best actor for the job. Debbie Honeywood who plays Abby hadn’t acted before, but she is so good because she is such a truthful, generous person. She is very understated and has great warmth and that all translates into the character.

I, Daniel Blake was the welfare system, this is the effect of zero contracts on family life, is there any other one film in the works that would make it a trilogy of sorts?
There are so many more stories we could tell, but it depends on Ken. He is 83 now.

I imagine most people would want to be retired by the time they hit their 80s. What keeps him going?
He is nourished by the people around him. He has great curiosity; he is intellectually very sharp; he is very alive and has great energy. He spoke to 1100 people recently at a talk. That takes energy. He is so engaged with the world and has such a drive. Making a film isn’t easy. There is much more to it than people see. We are lucky to work with a great producer Rebecca O’Brien; we’ve been working together since My Name is Joe [1998]. She is the engine room and does so much work. Women in film don’t get enough credit. She is a brilliant collaborator and we never take her for granted.

You came to writing later in life. You had a career as a lawyer first. Has starting later brought you a different perspective?
It was an accident really! The great thing about doing other things is that it gives you the experience to draw from. I never had a five-year plan. I go from one thing to the other, but if anyone had said I would still be writing and working with Ken more than 20 years after our first film together I would have thought they were mad.

Was it a happy accident that you developed this relationship?
Ken could have worked with other writers and I could have written for other people but we developed loyalty and made it a priority to work together. He is a demanding director because of his energy and how smart he is, but he is also a generous collaborator and he is great fun.

SORRY WE MISSED YOU is at Irish cinemas from Nov 1st