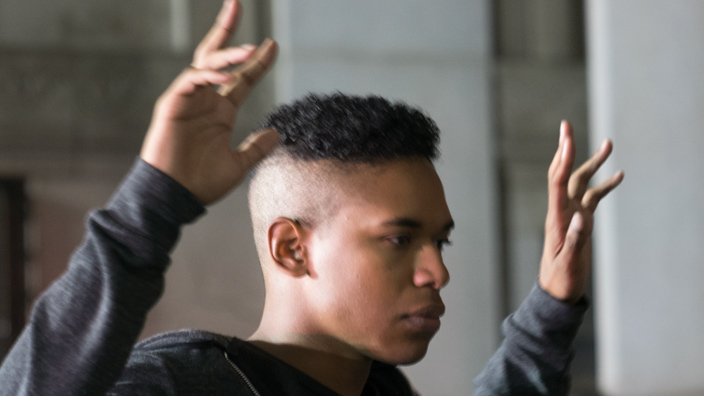 MONSTERS AND MEN is a Sundance winning movie with a ripple-effect narrative: from an eye-witness (Ramos) who captures a shooting on his phone, an African-American police officer (Washington) battling with his conscience to stand up against his fellow officers, to a local high school student (Harrison Jr) who transforms from passive bystander to vehement activist.

MONSTERS & MEN is released in cinemas and on digital 18th January

Monsters & Men is a powerful, and thought-provoking film. Can you tell me where the idea came from?

Growing up in New York these are the type of things that are always happening. It’s been on my consciousness for a long time. I wanted my first feature to be about something that spoke to me. All three of the stories are inspired by people I know or experiences that happened to people who are close to me. My father worked for the Department of Investigations. He is black and didn’t wear a uniform so I experienced things through him and through his job. He was treated as a black man because he didn’t wear a uniform but then he would show his badge and be treated completely differently.  If he didn’t have his badge on him the circumstances might have been very different.

The character of Zyrick is based on me. I came close to playing professional sports, and I had been thinking about what young guys like Zyrick are facing today.  If I was a black kid walking home from school who knows what could happen. I am not immune to what’s going on. It doesn’t matter if you are educated or have two degrees. If I was walking home at night and had a hood up, I would be perceived as a threat in my own neighbourhood. I was thinking about people like Trayvon Martin who was killed on his way home because of the colour of his skin.

There was another case of someone who died at the hands of a police officer. The video went viral. I was talking to a friend, a New City police officer, someone who I had grown up with. We got into an argument about it. We both watched the tape but we both saw different things. I couldn’t understand his opinion. I didn’t agree but he did make me look at things from all angles. His point was worthy of listening to. I still didn’t agree with him after that but it made me realize how many different viewpoints there are. I think if we could all understand that people think in different ways, we might be able to solve the issues, and that’s what I wanted to do with this film. I wanted to have a difficult conversation in an open way. I hope that people watching the film will walk away asking themselves what can they do.

I watched your short, Stop, which you have worked into Monsters & Men. Had you always intended to make Stop into something bigger?

The cop friend that I mentioned earlier is in the short. The film made it to Sundance and he came with me. It was after the premiere, at 2 am when we got into the conversation – the one that led me to making Monsters & Men. At the time I had no intention of doing anything else with the short but after the conversation, I just knew I had to make it into something bigger. I retained the aesthetic and the feel of the short because it worked, people responded to it. It was great to be able to refer back to it when I was talking about what I wanted to create with the feature.

The recording of the killing is a crucial part of the film but we never see it. Why did you make that choice?

It was a decision I made very early on. I felt that it would make it about one particular case but it’s not, it’s about so many cases like this one. I wanted to tackle the cycle and not just one example of it. It is about police brutality and the deeper-rooted issues. By not seeing it you lean in, you listen more. If you see something like the tape it becomes about what I see, and how I feel about it. I didn’t want this film to be about I, I wanted it to be about the bigger picture. It was also a different way of doing things. In most films, we would see the tape. I didn’t want to show people what they’ve already seen. I wanted to give audiences something different.

You have three great actors playing your leads but did you realise the legacy you were bringing on board when you hired John David Washington [Denzel Washington’s son]?

I definitely knew the legacy but the question was did the talent extend to the offspring? I didn’t know Denzel had children in the business, so when I first met John, I met him as an actor and then I was told who his father is. He is so different then Denzel, he looks different, he moves differently. Now, if you close your eyes, you can hear it, they could be the same person but when it comes to acting, he has a different style. He is a great guy, really humble, and brilliant to work with. He was so devoted. He is a special person. This story really connected with him. He took pride in the role. He did a month of rehearsal unpaid, its unheard of for an actor of this calibre to give that much time. We got lucky with him, we got him just before BlacKkKlansman. We probably couldn’t afford him now!

Has Monsters & Men given you a taste for making more features?

I’ve definitely caught the feature bug. Shorts are great, and if it was the right thing, I would still do it. Steve McQueen [director] makes shorts between features. It’s a great way to test a new medium, new equipment, and new actors. For now, I am happy to concentrate on tv or film. I would love to make another feature, and TV is such a great way to explore a character. You get 10 hours or more, and you can go really deep. I would be really excited to work on long-form TV.

The film is released in cinemas and on digital 18th January