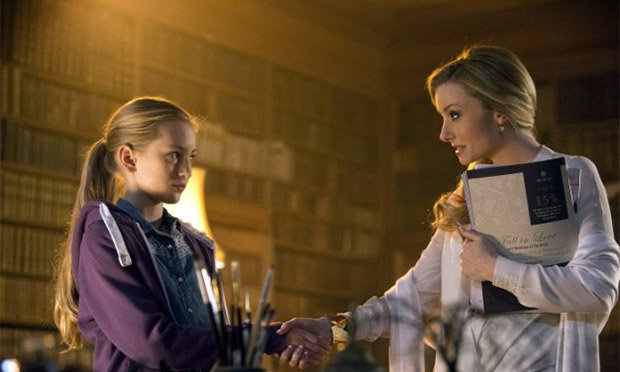 Interview with Lisa Mulcahy for The Legend of Longwood

With ‘The Legend Of Longwood’, Lisa Mulcahy makes the surprising move into the children’s market. And experience the Irish writer/director found “very inspiring”, she tells Paul Byrne.

It’s a hard-knock life, being an Irish filmmaker, the lack of moolah available meaning most have to bounce between the cool stuff the film student inside of them needs to make and the naff stuff that the people with the moolah wants you to make.

For Lisa Mulcahy, that balancing act has seen her produce a confessional documentary (2000’s ‘Dan Dan, Dad And Me’), an indie cult (2008’s ‘Situation Vacant’), episodes for such Irish TV standards as ‘The Clinic’ and, most recently, TV3’s ‘Red Rock’, plus a whole bunch of shorts, a soppy Christmas TV movie (2010’s ‘Gift of the Magi’) and now, ‘The Legend Of Longwood’.

The latter is something of a departure for both Mulcahy and recent Irish film in that it’s a straight-ahead children’s film all about a young girl who, still struggling with the fact that her dad has been missing for four years, is dragged by her mum to live in the wilds of Ireland. Where there be mystical magic afoot. And horses.It’s one of those movies that would work beautifully on a Sunday afternoon in front of the box in the mid-1970s. Which isn’t entirely an insult.

As she takes a break from shooting the new season of Red Rock, we sat down with Lisa Mulcahy to chew the, eh, hay.

Was it a big budget then?
LM: It wasn’t big in the Hollywood sense – it was around four million. So, we had a healthy budget, and that was really needed for the special effects. It was important that you believed the magic in this film…

I’m guessing at least €2million of the budget went on low whistles and uilleann pipes? There’s lot of Celtic ambience chasing on the soundtrack…
LM: There are no uilleann pipes on the soundtrack, actually – so, we saved a little money there [laughs]. The soundtrack was the lowest of our budget worries…When I first saw the title, I thought it was another John Holmes biopic.

Where did the actual idea come from here?
LM: This was a story that Nadadja Kemper had a for a while, and herself and Gwen Eckhaus – who is also Dutch – wrote a script together. And that’s the script that I first read. It was written for six-year-olds then, and it had a wonderful charm about it that got me. I just felt that it would work better for an older audience, and that took some work. But the magic was always there.

Once you step into the world of young girls with a love of horses and getting lost in the Irish mystic, you’re in deep family film territory. Did you have any reference points here?
LM: We talked more about the audience that we were writing for. When I read that early script, there was just a mention of this little girl’s father going missing four years ago. And that to me was the real emotional core of the story. It brought a huge amount of depth to the film too, which is something that’s always there with truly great children’s films. It was a natural step then to aim the film at older kids, as there were issues here that they would respond to, on an instinctive level. Of course, you really want to make the film work for all ages, but it was important to have the darkness there alongside the lightness.

Was the script an easy sell…?
LM: Well, it’s very difficult to get any film made, period. And once you’re in the independent world, you really have to search out backers. The good thing about ‘The Legend Of Longwood’ is that it’s a film with a very definite audience. And there are very few live action movies out there for kids today – it’s all animation.So, we felt we had something different to offer, and it was something definite too. I guess ‘Harry Potter’ was the last time that you would have had a live-action film for this audience. It’s all animation now. Some of them are great, but when I was growing up, you would go to see films with heroes that were your age, real people that you could relate to. I don’t think that’s there so much anymore. Even something like Pixar’s ‘Brave’, that’s an incredibly violent film, and it just wouldn’t work in live action.

The reality in animation can be vey far removed from actual reality…
LM: Absolutely. We wanted to ground this film in an everyday reality, despite the magic in the air. I think children become very involved when they recognise themselves in a film. And good children’s film deal with issues, whether it’s a missing parent, or a troubled childhood, and that can be deeply rewarding for a child, to see their world being put up on the big screen. They don’t feel so alone…

There is a rule about never working with animals or children, and you do both, with six months of CGI added in, for good measure. Quite the task, keeping this on track?
LM: We only had six weeks to shoot, which meant we had to be well organised, but when your cast are aged between 12 and 15, you get to take apart life from their point of view. They see the world in a different way than adults – we’ve forgotten half the ideas that they have. It’s actually very inspiring, and it pushes you beyond your normal boundaries.

To the nearest ten, how many horses were killed during the making of this movie?
LM: Thankfully, not even a headcold was suffered. The lead horse was actually freakishly good. He’s French, a movie trained horse, and he could anything. You could set off a bomb beside him, and he wouldn’t bat an eyelid. And you had to avoid words like ‘Action!’, because that was a word that the horse knew, and would automatically join the scene. So, when it comes to not working with animals and children, I’d love to do it again. It was a joy.

That neat line, “Irish people like being unhappy – it makes us laugh”; I’m guessing that came from you rather than your two Dutch co-writers.
LM: I think there is a truth in there. The Scots might outrank us on that front, but Irish people have an ability to find the comedy in the tragedy. There’s a good sense of perspective…

You’re deep in ‘Red Rock’ territory – taking up most of your diary this year?
LM: It has. I’ve done 16 episodes already, and I’m currently shooting some more. I’ll have done 20 episodes altogether, and then immediately after that I’m going to be doing some writing on a true story movie, that’s very much not for children… There’s a few irons in the fire right now, which is great…