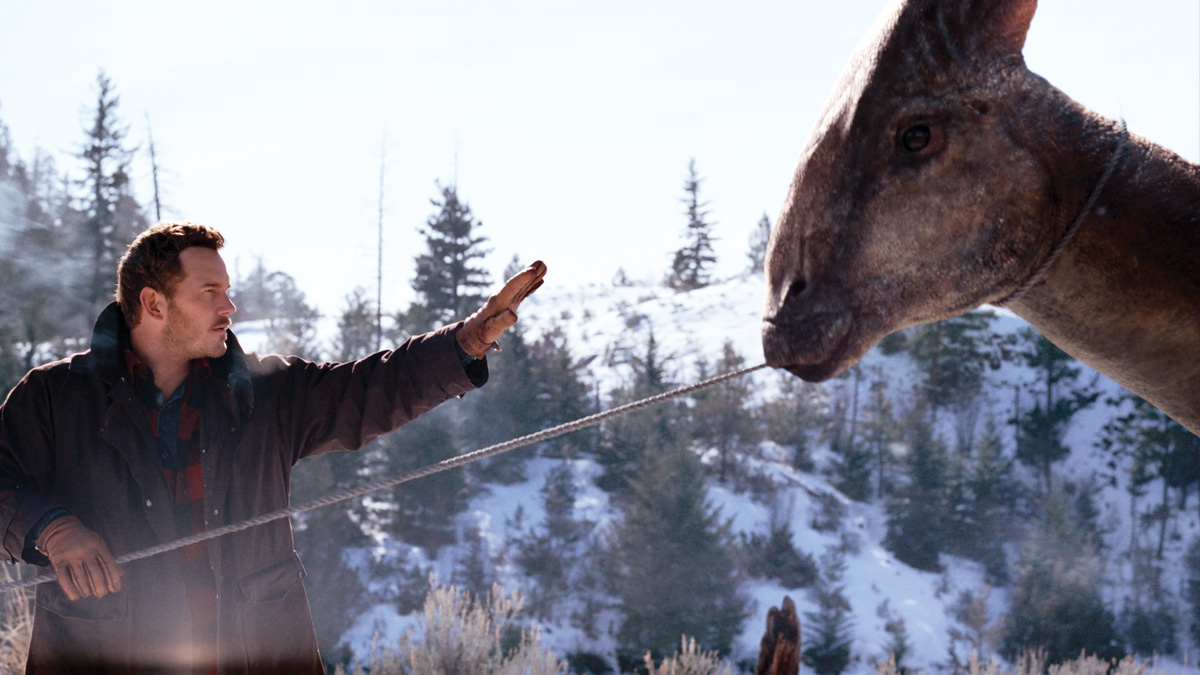 We caught up with director Colin Trevorrow to chat about the epic conclusion of the Jurassic era that see’s dinosaurs and humans trying to co-exist out in the real world. Chris Pratt and Bryce Dallas Howard return alongside the iconic cast from the original film, Laura Dern, Jeff Goldblum, and Sam Neill reprising their roles as Ellie Sattler, Ian Malcolm, and Alan Grant.

As a fan of the original trilogy, what was it like to see the original gang back together?
It was extraordinary. We had been living together for a long time because of COVID, so we knew each other somewhat at that point. When we finally got on set to work together, it wasn’t as if I was just walking onto a stage, and suddenly there was Jeff Goldblum, Laura Dern, and Sam Neill together for the first time. These were collaborators, and I really appreciated that because one could crumble when faced with that, but I think I was confident enough in what we were doing and what our mission was as creatives that we were able to get right to work.

Was it always your plan to have the originals come into your films, or was that something that developed when you saw how successful the first film was?
After Jurassic World came out, Derek Connolly [scriptwriter] and I took a road trip together and talked about what the rest of the story could be, and the idea was that we would bring the three of them back for the third film. We decided we would use the second movie to further cement Owen [Chris Pratt] and Claire [Bryce Dallas Howard] as characters and to build this family that we’re following to create a story. Not just to tell a story that sets dinosaurs loose for the world to create this new equilibrium but also the rest of the story that the audience doesn’t know yet about Maisie and who she is. Hopefully, it will be a pleasant surprise to people to see the evolution of her character and what she means in the world of genetic power.

Dominion has plenty of nostalgia for original fans, but it also works for fans who are new to the franchise. How important was it for you to keep the essence of the original films and be able to bring something fresh to new audiences?
It is a delicate balance. My rule on this one was that we are not doing a homage; we are not doing nostalgia because I know that it will happen naturally anyway, that it’s inherent in what we are doing. I would say that any kind of Easter egg you see, anything that feels like a nod to the earlier films, is just part of this natural inclination we all have to acknowledge what came before, to show respect for it. There are probably a few things that may seem like Easter eggs, but they are an intrinsic part of the story once you watch all three films. I found the presence of Laura, Sam, and Jeff was nostalgic enough, and the best thing we could do is send them on a real adventure, put them in a situation with real stakes, put them in real danger, as opposed to just having them present.

Do you worry about whether the original cast and Chris, Bryce etc., would mesh?
Both the legacy and our new characters have been in the same number of movies. It was very important to me that we build characters, especially for the younger generation, that are valued to the same extent so that when we placed them together, the legacy characters didn’t suck all the oxygen out of the room, which is the danger. Some age groups will watch this, see the legacy characters, and see their icons. Now, if you imagine yourself at 15 right now and you saw Jurassic World when you were seven, the legacy characters are the new characters in some cases, and Owen and Claire are the icons. Hopefully, if people all go together, they will have different emotions in that moment. I think that’s part of what is great about having a multigenerational franchise. When they finally come back together in the end, you really do feel like you are seeing the end of six movies, which was the goal.

I have a lifelong love of old-fashioned roof chases, and, in this, Claire gets a brilliant action-packed roof dash. Female characters so rarely get this type of scene. Was it important for you to let Claire have a moment like this?
Bryce’s level of action intensity has grown with each of the movies, and the two of us really wanted to blow it out with this. I create these sequences and lay them at the feet of the actors I love. I consider all of these scenes as ways of honouring what the actors have done for us in creating these wonderful characters, to be able to put them in situations that, hopefully, kids will just watch over and over again for years to come. Creating these scenes is how I can show my gratitude. I love the chase sequence, but there is a later scene she has with a Therizinosaurus, it is much slower and more intense, but I think it’s one of my favourite sequences that we have done.

Jurassic has a tradition of strong females, and you have introduced a new one to the fold, Kayla, played by DeWanda Wise. Is it important for you to continue the tradition?
Of course, it’s a value this franchise has had from the beginning, and it’s something that I’m carrying on. Laura Dern created a female character in 1993 who has been an icon for scientists and women for 30 years now. Kayla Watts is a character I am deeply proud of, and I hope that that character lives on in the imaginations of young girls for a very long time. I love her, and DeWanda Wise is extraordinary. We have three generations of women passing the torch to a new generation.

You have new dinosaurs in this film, including the Giganotosaurus. Do you enjoy researching the dinosaurs?
We put out a prologue, and the dinosaur you see in that is the Giganotosaurus, which introduces that character and is the beginning of the story. The T Rex never forgets, and that is something we see in Dominion. Hopefully, there’ll be a lot of satisfaction when people see Giganotosaurus’s arc; I can’t say much about that now for obvious reasons. One of the best parts of my job is that, for three movies, I’ve been able to select which dinosaur is going to film. The writing team and I had a lot of joy figuring out how to expand our cast of characters when it comes to dinosaurs. There are feathered dinosaurs in this movie; there’s Therizinosaurus. I am excited for audiences to see how many dinosaurs we’ve packed in.

We now have six movies which technically rounds out the franchise, but do you think we will see more Jurassic stories?
Whether it’s in me or not isn’t entirely up to me. I think it’s up to the audience. People really responded well to this new world that we’ve created, which is very different from what Jurassic Park has been up until this point. I would love to provide the same kind of mentorship and guidance that I was given to a new filmmaker who I think could come in and see this in a whole new way. I get excited about that. I am devoting a lot of my time and energy to working with younger filmmakers and helping them realize their ambitions. If that could happen in the context of Jurassic, I’d be all in.

One last nerdy question, which is your favourite dinosaur?
I’ve always loved the Ankylosaurus, and in this movie, it is the Therizinosaurus. I think that animal will live on for a long time in folk’s imaginations. I think there might be competition for my favourite because of him.

JURASSIC WORLD DOMINION is at Irish cinemas from June 10th