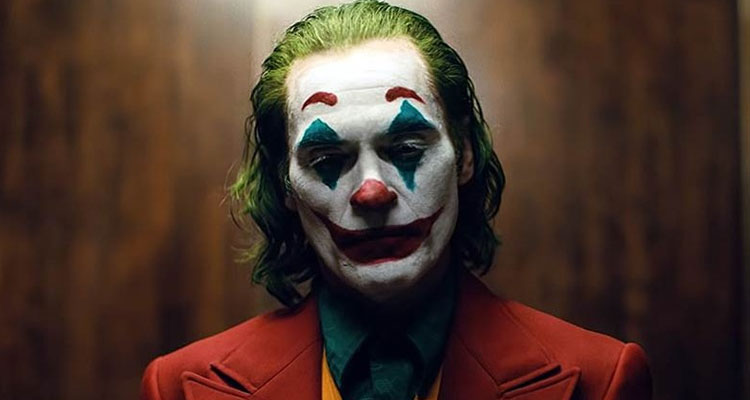 Directed by Todd Phillips, JOKER is the filmmaker’s original vision of the infamous DC villain, an origin story infused with, but distinctly outside, the character’s more traditional mythologies. Phillips’ exploration of Arthur Fleck, who is indelibly portrayed by Joaquin Phoenix, is of a man struggling to find his way in Gotham’s fractured society. A clown-for-hire by day, he aspires to be a stand-up comic at night…but finds the joke always seems to be on him. Caught in a cyclical existence between apathy and cruelty, Arthur makes one bad decision that brings about a chain reaction of escalating events in this gritty character study.

You’ve said that certain films from the 1970s and `80s spoke to you and inspired you to be a storyteller—why is that?
I think it was their ability to take a deep dive into a particular character that really connected with me, that they were character-driven stories and not necessarily plot-driven stories.  It was something that I didn’t necessarily even realize I was noticing until I looked back on it.  And it didn’t hurt that some of the best actors of our time were in all these movies, whether it’s Network or Taxi Driver or Serpico, One Flew Over the Cuckoo’s Nest…there are so many.  In some ways it’s like theatre, but with a little bit of the magic that movies give you.

As a writer and filmmaker, what’s the beauty—or challenge—of a protagonist who’s an unreliable narrator?
Well, unreliable narrator is almost not even big enough, because he’s an unreliable narrator and he’s Joker.  You have an intense amount of freedom with an unreliable narrator, and you have even more freedom when he’s Joker.  He says in the comic book Batman: The Killing Joke, “If I’m going to have a past, I prefer it to be multiple choice.”  So, it just depends on the lens through which you watch the movie as to what you think really happened, what you think he is at the end—is he even Joker?  There are many ways to see it and what I think is interesting about the movie is you don’t walk away having all the answers.  Different people I’ve shown it to have different theories about what may or may not have happened.

And because it’s an origin story you are able to devise the way in which he becomes Joker—if indeed he does?
Right, right.  For us, because of the version of the story we were telling, we tried to make everything—as weird as it sounds—make sense.  For instance, part of the reason he’s a clown is because we thought, “Why would he put this makeup on when he does eventually become Joker?  Why does he even have this makeup?  Oh, I know.  What if he’s a clown in real life?”  That led to, “Well, why is he a clown?”  Because his mother always told him he had to bring laughter and joy to the world.  Our answers to our own questions began to blend together to become a story.

What are the themes you explore through Arthur’s story?
One of the things we wanted to explore with the movie is empathy and, more importantly, the lack of empathy that is present in so much of our world.  That’s one of the things that we found interesting, and we kind of leave it up to the audience as to how to view that.

In the film, Arthur is both struggling to be seen and aware that he’s invisible.  But all the little kids in the film, such as the boy on the bus, like him and see something good in him.  Why do you think that is?
Because I think kids are seeing the world through no lens, really; they don’t distinguish the marginalized person from a rich person or a poor person.  They just see a guy who’s trying to make them smile and they react to it.  The mom in that bus scene, if that mom had turned around and said, “I just want to thank you for making him laugh, he hasn’t been this happy all day,” Arthur would have floated home instead of that heavy walk he has going home.  In fact, I always said to Joaquin, “Arthur has heavy shoes.”  It’s just the weight of the world he’s carrying around.

In the DC canon, there are countless aspects to the Gotham City we all know, and you chose a few very particular elements, like Arkham, to include in the film.
Yeah, of course we have Thomas Wayne as a character, and Alfred and Bruce, and we have buildings named for the Waynes, like Wayne Hall and Wayne Manor.  But Arkham Asylum in our movie is called The Arkham State Hospital, which seemed a little bit more appropriate.  In our version of Gotham, would they really call it Arkham Asylum?  No, it would be the Arkham State Hospital.

How did you work with your creative departments to realize the Gotham that you envisioned?
Whenever you’re making a movie, you have a few key partners along the way.  I wrote it with Scott Silver.  Bradley Cooper and Emma Tillinger Koskoff were my producing partners, Emma was on set every day making it all physically happen.  Mark Friedberg, who is our production designer, really gave the city—our Gotham—the look and the vibe you see in the movie.  Mark grew up on West 81st Street, so he went through old photos of New York to find the right level of graffiti and the right level of trash and the picture cars that we’d want for the period the film’s set in.  His attention to detail was insane.  And Mark Bridges, who did our costumes, has worked with Joaquin a few times before.  Larry Sher, who was my cameraman on my last six movies, he’s probably my most trusted creative partner.  We’ve traveled the world together shooting movies, and Larry and I really talked about the specific look of this.  And Hildur Guðnadóttir, the composer of our score, was writing music before we even shot, based on the script pages I was sending her.  And there’s so much score in the movie because I think what she did was so unique.  And obviously my editor, Jeff Groth, works with me up till the final frame is in place.

There’s a line in the film where Arthur describes his life: “I used to think that my life was a tragedy, but now I realize it’s a comedy.”  Having now taken him from the first page of script to that last frame of the finished film, can you say where, in this story, he crosses that line from one to the other?
There really is not one incident or one moment where it’s one or the other.  Arthur is absolutely not a hero and this film is not a comedy, but the line is coming from him through his own particular point of view, which we know is untrustworthy.  The same could be asked of when does he become Joker?  Well, he doesn’t become Joker when he’s painting his face.  It’s a step-by-step thing.  The reason the movie has such a measured pace in the beginning and is so deliberate is intentional, and I think that’s what makes it effective. 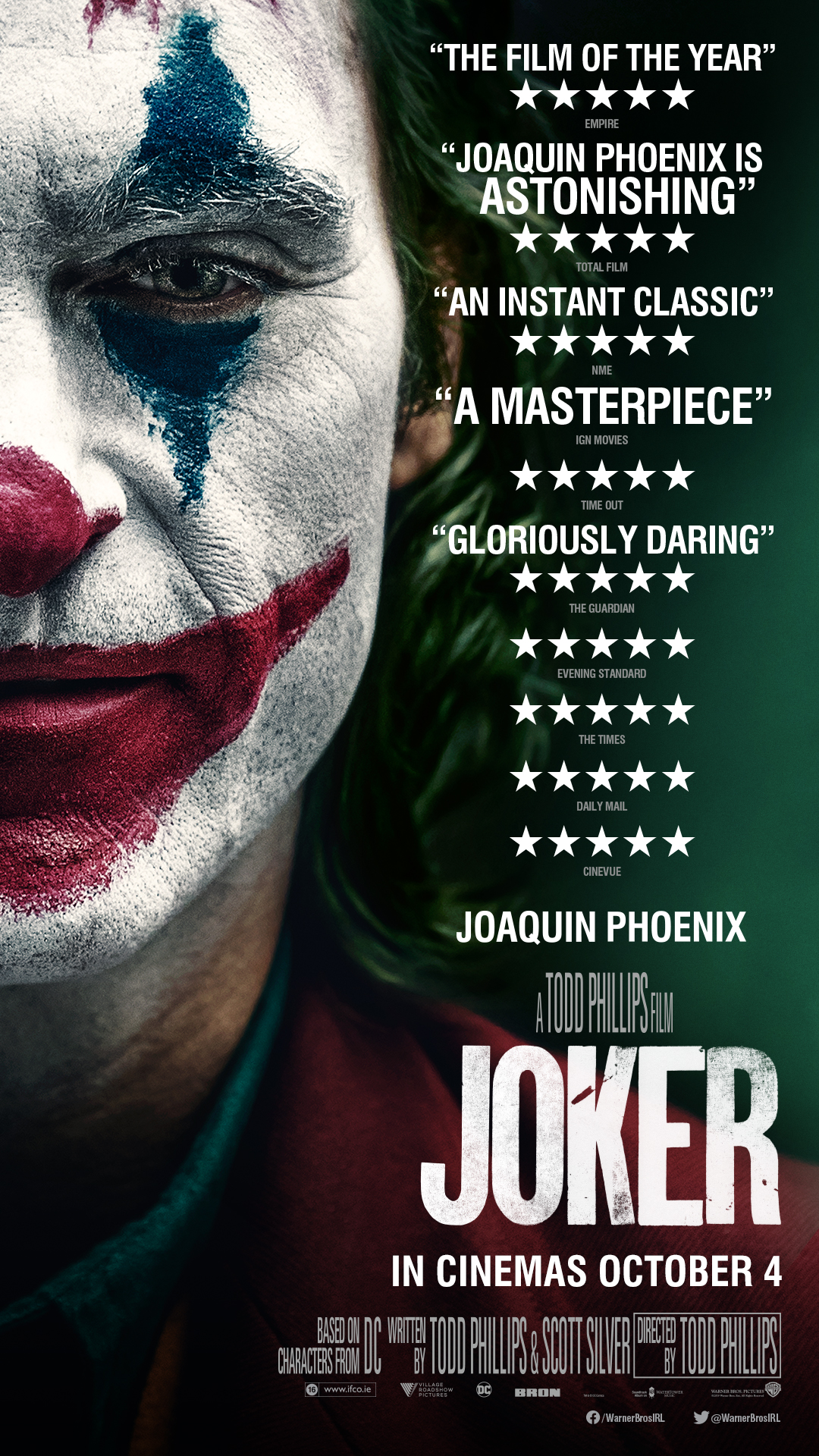 JOKER is at Irish cinemas from October 4th