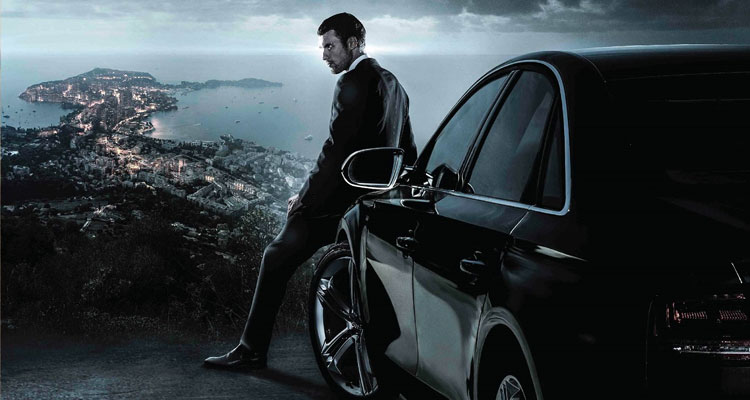 Interview with Ed Skrein for THE TRANSPORTER: REFUELLED

Taking over the lead role in a reboot of the Transporter franchise finds Ed Skrein finally no.1 on the call sheet. Movies Plus talks to the fast-rising, slow-living star.

It’s been a long day for Ed Skrein. I can tell because I’m interviewer no.33 today. “Thankfully, you’re also the last,” smiles the 32-year-old, Camden-born actor. “Truth is, you can learn something from every experience, and if you approach each day positively, you’ll always grow a little by the end of it. I haven’t had this kind of attention before, but I’m always happy to embrace a challenge. It’s been tiring, but fun.”

Chances are, Ed Skrein will have to adapt pretty quickly to being the centre of attention, having now firmly progressed to leading man status by replacing Jason Statham in the title role of Frank Martin in the Transporter franchise. The first outing in a reboot trilogy recently announced by co-creator Luc Besson, ‘The Transporter: Refuelled’ rattles along with that same Carry On Bond mix of the original trilogy. Serious head-slapping and hardy slapstick bounce off one another for the full 96 minutes, and through it all, Skrein seems to be having a blast. And, sure, why wouldn’t he? Beautiful babes, exotic locations, martial arts orgies, fast cars, glorious puns, and a hefty wage packet at the end of the week. Nice.

Having made his screen debut when long-time buddy – and fellow musician – Ben Drew (aka Plan B) insisted Ed take a role in his 2012 feature debut, Ill Manors, the work soon came thick and fast, with the role of Daario Naharis in ‘Game Of Thrones’ the following year putting Skrein firmly on the map. In constant work over the last three years, despite – or perhaps because of – starting up a young family, Skrein has three releases later this year – playing a fashion photographer in the French stalker drama ‘The Model’; a frazzled A&R man riding the Britpop wave in ‘Kill Your Friends’, and avenging angel Ajax in Marvel’s Ryan Reynolds-led ‘Deadpool’.

Jumping into a franchise that’s gone on far longer than even Luc Besson could have predicted – a blessing or a curse?

Oh, a blessing, a blessing. There’s no presssure for me, just a fun four months, where I got to work in Paris, and jetski in the South of France, and do all these incredible stunts, and make jokes, and beat up the bad guys, whilst also being able to help provide for my family. And they enjoyed it too, being there with me for the shoot. So, absolutely a blessing. I learnt a lot making this movie, and I gave it my all. Once it’s out, everyone will have their own opinion on it, and that’s fine, that’s right. It’s not my job to worry about that though; my job was making the best Frank Martin I possibly could.

When it came to preparing to play Frank Martin, was it a case of going through the original Transporter trilogy with a fine-tooth comb, or did Luc and co-creator Robert Mark Kamen have enough notes for you to figure him out…?

The preperation was a mixture of watching the old films, talking with Luc, watching the Bond movies, some martial arts movies, some comedies, and just coming up with some new ideas. I certainly wanted to continue the tone and the pacing of those first three films, because, you know, Jason did such a fantastic job. For me, this is all part of my development, or learning my craft, so, I enjoyed every single second of making this film, from the research to the final day of shooting. And now this, talking with the world’s press about it. It’s all good…

Given that the previous three Transporter movies have grossed somewhere in the region of $3.6gazillion (give or take a kachillion), how was your sleep leading up to that first day of shooting?

Slept like a baby [laughs]. I first heard that I’d gotten the part when II woke up with an email from my American agent. I remember thinking, hey, that’s great, but then I just laid back down in bed with my son. And watched Peppa Pig. My son is the most important thing, so, this is all just fun and games. I don’t feel those nerves, because this is not real life. It’s art. And I’ve existed for art for the last few decades. Family is much more important. Family gives you perspective, as do your friends, who might be going through real troubles as opposed to career worries. It’s important to keep a grip on reality when your work is all about putting fantasies up on screen.

Having such a literally laidback attitude is admirable, given that most art is reliant on commerce to survive…

Oh, it’s not like I’m complacent about that aspect, not at all. I’ve never been happy with just being here. I’m always trying to get better, to learn from each project, so I can be a better actor. I want to be proud of the work I do. I want to create work that matters, that contributes something to art. I want to leave some kind of legacy. And commercial success is a part of that, of course. I don’t want to ignore the realities of the business side, but I don’t want to dwell on it either.  That’s why I want to do it all – big, bold blockbusters and small, smart independent films. A good life is all about balance, and to be able to make movies like The Transporter: Refuelled and Deadpool alongside the likes of Ill Manors and The Model, that’s just ideal for me. The hope is, making the big movies will give me the chance to greenlight those smaller movies, because the likes of The Model and Kill Your Friends are where it’s at for me.

Those early years in Camden, collaboration with such bands as Asian Dub Foundation and Doc Brown, releasing your solo debut, The Eat Up, in 2007 – was acting a part of the gameplan back then? Or did you just fall into it?

Never had a gameplan, other than approach everything positively, and see where it leads. But I definitely fell into this, and I thank my friend Ben Drew for pushing me in that direction. He’s a very talented man, and I’m very thankful that he saw something in me that I didn’t see. If it wasn’t for Ill Manors, I wouldn’t have thought about becoming an actor, no question. Ben’s godfather to my son, and I love him to bits. And I’ve been lucky in that I’ve met other people who saw something in me too, and I’ve always felt it’s my job to bring that something forward for each and every one of these great filmmakers.

Looking over your CV, you’re one busy man, with at least three projects every year. Lucky or stubborn?

I’ve grafted, really grafted. I always want to be the busiest person on set, and I take the craft and the professionalism of what I do extremely seriously. As I said, I’ve been lucky that other directors have taken a chance in pushing me to another level, and then another level. It’s inspiring, and it makes me feel ready now to go toe-to-toe with anyone. There’s just so much I want to do…

I’m guessing this calm perspective on what can be a fickle and fame-driving business must have come along with the birth of your son…?

My son was actually inside my missus’ belly when we were shooting Ill Manor, so, he and my new career have gone hand-in-hand. He’s definitely helped me cut through all the bullshit, and concentrate on the craft, on the work. The only party I want to go to are connected to stuff like Minions, and all those silly movies. I love them. And my family happened at just the right time. It’s been great to have that in my life as my career gets busy. I’m 32 years old, and I’m not going to get over-excited about am all-night party. I’m happy to go home to bed and be ready for a new day. It helps that I’ve surrounded myself with people who are truthful. No Memphis Mafia for me…

Our time is running out, so, a few quickies. Did you get a chance to talk with Jason about how to approach the Transporter franchise, how to play it none-too-straight for these Milk-Tray-ad-on-acid outings?

I tried to catch Jason before the shoot started, but it didn’t work out. My parents always thought me to be respectful, and I would love go get Jason’s view on making these movies. That’ll be a good talk when it happens. Hopefully soon…

Especially given that there are two more Transporters lined up. Have you signed up?

It’s certainly an option, but I guess we all have to wait and see how this one does first.

You’ve been a man of action in much of your work – is there a soft, sensitive side that hopes to make a soppy period drama, spending the entire movie writing letters with a quill and staring out of a window…?

A lot of the movies that I’ve done have been more emotionally based; it’s just the big ones that are action based. My heart is in independent cinema. The Model is the kind of film that I always want to make. Inside my gut, my heart, that film made me feel so good. The fact that I can do the big action stuff and these smaller films is, as I said, the ideal for me.

THE TRANSPORTER REFUELLED is in Irish cinemas from Sept 4th