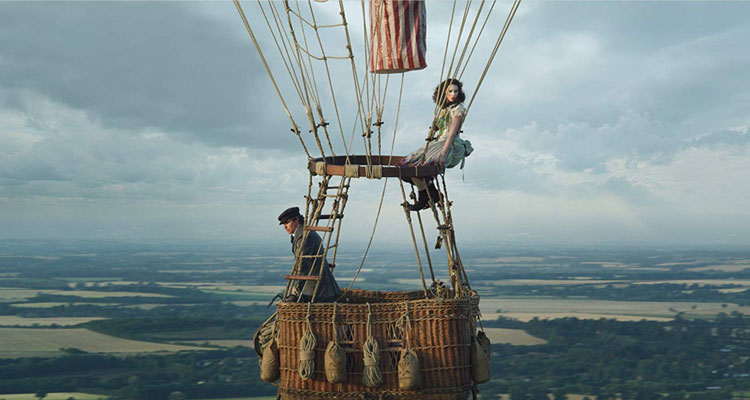 INTERVIEW with director of THE AERONAUTS Tom Harper

‘The Aeronauts’ is a visually stunning historical mishmash of several famous balloonists from the early days of man’s attempts to conquer the skies. Director Tom Harper talks to us about shooting in the sky and combining several real life events into one narrative.

The idea for the film came from your director of photography George Steel?
Yeah! Well.. He heard a snippet of the book (Falling Upwards) on the radio and he thought ‘Wow, that could be a great film… wouldn’t it be great to shoot a whole movie in the sky and what visual possibilities that could bring’… Then, I went and bought the book and I read it – that book is a compilation of some of the most remarkable balloon flights ever.

The majority of the film was shot in an actual balloon in the sky, with just minimal CGI, can you tell us about that?
We built a great big enormous… real life… mammoth… balloon… and put the actors in it and sent them up. And did some filming (laughter). I was in a helicopter. We did some stuff on drones actually, we did some stuff in a helicopter, we did some stuff up there with them. For an audience I think it helps the fact that throughout the film there are lots of shots that are real so you never quite know what’s real and what’s not so there’s lots of blurring between the two. But also we did a lot of helicopter filming of clouds as well.

You changed one of the characters from real life balloonist Henry Coxwell to a fictionalised widow heroine Amelia Wren. Can you explain how that came about?

James Glaisher was a meticulous scientist, his pilot at the time was Henry Coxwell and they didn’t really speak very much, they just took a measurement every second or so which is admirable and brilliant but just not the greatest piece of cinema necessarily. So I read some of the other stories and realised that actually there are so many extraordinary things that happen on these flights, that you could take a number of different ones and combine them and you would have a wealth of material to make a film. But then, if you’ve got two actors in a basket essentially for 90 minutes, and you’re telling this story in real time admittedly with a few flashbacks but primarily in the basket, how can you make this character relationship as interesting as possible and there’s this other Aeronaut who flew before James, Sophie Blanchard (who was the basis for Amelia Wren, the character played in the film by Felicity Jones). She was really extraordinary and she was sort of flamboyant and provocative and a bit of a wild card and we thought if you put the two of those very different characters into a confined space together… that’s drama.

When did you decide on your two leads Eddie Redmayne and Felicity Jones?

We didn’t really have anyone in mind when we were writing the script, but I thought of all my favourite actors to play these roles, who would be most right and at the top of my James Glaisher list was Eddie Redmayne and at the top of my Amelia Wren list was Felicity Jones and I wondered if it was going to be a problem because they have relatively recently worked together and maybe they wouldn’t want to make that choice again but firstly that shouldn’t stop us from going for the best people for the job, and secondly I know they had a good time working on the movie, they’ve clearly got great chemistry.

Was there temptation to create a romance between the two?

Only from myself actually. And the actors maybe. We did actually shoot an ending where they did kiss. The truth is that you never really know what you’re going to feel in the film or what options you’re going to need until you get back in the edit and you take stock and you look at it altogether. In truth, it was ten minutes to do another version and then you’ve got it and then if you do think oh we do need that it does save you a quarter of a million quid to go back and do it again.

Yeah exactly! We all knew that that wasn’t the right ending. It felt too soon because actually the whole film is in real time & it’s nice to leave it open ended. I mean I’m a romantic and I like to think that they get eventually together but that’s open to interpretation. Maybe they just remain friends and they continue flying together but that’s just up to the viewer.

THE AERONAUTS is at cinemas from Nov 4th