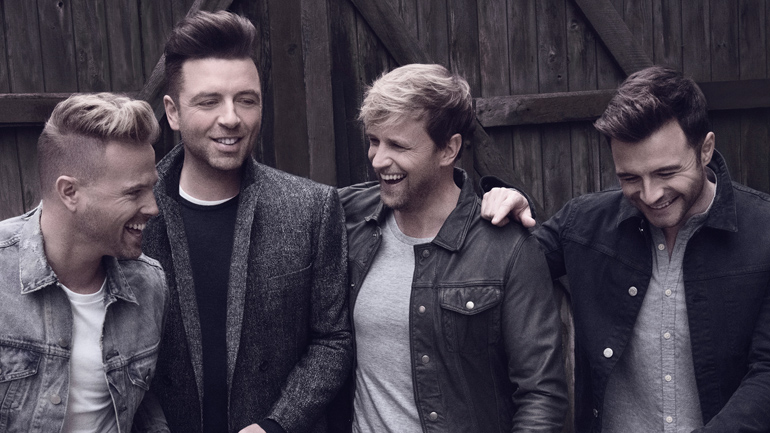 Celebrating 20 years since their debut single hit the No.1 spot, ‘The Twenty Tour’ will see WESTLIFE perform together for the first time since 2012. Cinema goers across Ireland will be able to join Shane, Nicky, Mark, and Kian and the sold-out crowd at Dublin’s Croke Park Stadium on Saturday 6th July, direct from their local cinemas.

For more information and to find cinema locations visit westlifeincinemas.com

2019 marks the 20th anniversary of your first number 1 single. Has the group become more of a family over the years?
The group feels more like a family than ever before. Before it felt very much like just the 4 of us, but now we’re all older and we have kids, Westlife is becoming a part of their lives too. Having everyone over for BBQ’s and birthdays has cemented what a big extended family we in fact now are.

You’ve been away for 6 years, but the Twenty Tour has been your fastest selling tour of all time! When you reunited, could ever have imagined demand for tickets being so high?
Never! We were all nervous about how many people would care! But they have come back in force and it’s given us the confidence to put together an even bigger and better show than ever before.

The Croke Park date of the tour is being broadcast into cinemas around the UK and Ireland. Is it important to you that the live broadcast is from your home country show in Ireland?
We think it’s great that we get to do this at our home coming gig in Ireland & Croke Park is such an iconic venue it just made sense that this is where we had to do it.

This won’t be the first time you’ve graced the Croke Park stage. Do you remember how you felt walking onto the stage in front of 85,000 people for the first time in 2008?
I think we’re all going to feel overwhelmed to be back after such a long time but also incredibly excited.

What can cinema audiences expect from this show?
We feel that it will be the best show we’ve ever done. There will be a mix of new music and of course all the hits along with some amazing visuals. The show will lend itself so well to cinema and will allow people watching to feel like they are actually a part of it.

Are there any songs, new or old, which you’re particularly looking forward to performing during the concert?
We can’t wait to perform Hello My Love on stage, it will be the first time! Also it will be great to bring back the classics Flying With Out Wings, Swear It Again and World of Your Own

You’ve just announced your new album, Spectrum. What can you tell us about it?
Spectrum is a mix of old and new. It’s got the old school Westlife feel to it but with new sounds. We’ve been so lucky to work with such world class songwriters and producers like Steve Mac and Ed Sheeran

WESTLIFE will broadcast live from the SOLD-OUT final show of their UK & Ireland Tour on Saturday 6th July 2019
For more information and to find cinema locations visit westlifeincinemas.com