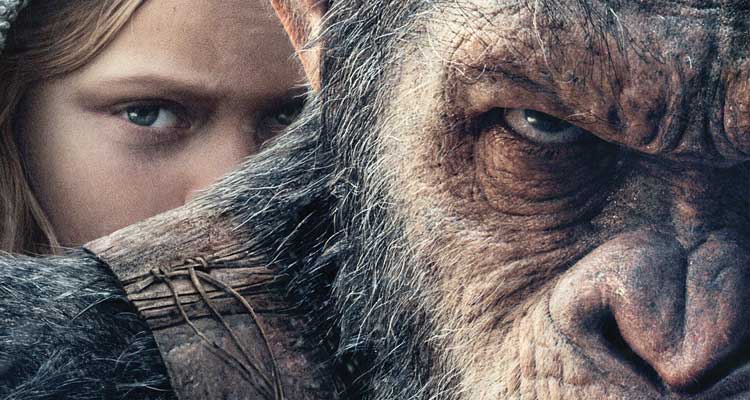 Matt, Congratulations on the film. You’ve said, “I want this film to be a biblical epic. I see Caesar as the Ape Moses why?

MR: Well, because if you look at it in the history of this early ape civilisation, he is the critical figure. Without him, they wouldn’t be where they are. The idea, especially given the conflict of this story, which is a war story, was to put Caesar to his greatest test yet and in passing it, he will transcend into the realm of the mythic. He will be that ape that other apes will look back at and say, “he forged the path for us. He is why we are here.”

With a biblical film, comes a mammoth budget. What’s it like being involved in a film, where, I know money is an issue, but it’s not like working on an indie film. What’s it like to go, ‘I want this’ and more probably than not, you will get it?

MR: Well you know it’s interesting because the thing about these movies, the movies are enormously expensive but what is most expensive are the visual effects. The challenge of this movie was, I wanted to do an ape point of view movie. And that meant that the apes are in every scene. And so, in the other films there were always scenes that didn’t have apes in them and the apes shots are incredibly expensive. So the budget actually goes paying to make sure you see these close ups of these apes and that you are connecting to the emotion of what you are seeing. So, in a weird way, you’d be surprised how the production is not as grand as you think. However, given that, it’s a war movie, so we wanted to have battles. I wanted it to be like a David Lean movie. I wanted the movie to be the most ambitious apes movie yet and we were able to do that. It was thrilling. You know we went out and shot on 65mm and we shot on these beautiful locations. We have some pretty sizeable battle scenes. The thing that matters the most though, and the thing that really, most of that money went to, was the intimacy. Which is all of the stuff that really matters. It’s a war movie between the species but it’s the war for Caesar’s soul that really matters and so most of that money went to make sure that the emotions that Andy Serkis was giving us in his performance were translated into this photo real ape that you looked at and felt like you were seeing yourself inside.

I was watching this thinking, casting this film is really different to casting any other film.

How do you cast and ape and how do you know that even though this is a good actor, a good actor isn’t going to be able to necessarily be able to convey the emotions you need for a good ape.

MR: Well it’s not that they can’t convey the emotions because a good actor can convey the emotions. The question is can they find a way to convey the emotions and still do what is required physically? What basically has to happen is that they have to be able to work with Terry Notary, to be in their bodies in such a way. It’s almost like you are learning a certain skill that then you have to forget, because the only thing that really matters is the emotional essence. But if you can’t as a foundation, do the ape movements, then the illusion won’t be complete. So the casting process is challenging. You know, the actors come in and I first have them do a scene, that is a human scene, and I see what they are like as actors. Then we start throwing at them these kind of more primitive exercises and then if there is an actor that I really like, we have them do call backs where I have them work with Terry Notary, and I talk to Terry and say, “So Terry, you know, I like this actor a lot, what was your sense about their ability to pick up these movements?” He gives me his thoughts and ultimately I make the call as to whether or not I think I am going to get what I need from that actor. So it’s an unusual process.

I’m also totally blown away by all of you involved in this film. I would love to be in your brain. I don’t understand how you direct something that isn’t at the end product, what we are actually seeing on screen!

MR: Well the direction is actually easier for me, than the putting together. Because the direction, look I am looking at Andy Serkis in the first version of the movie that I am making is not Planet of the Apes, it’s planet of these people in these mo-cap suits. That movie works. That’s the movie I first cut together. But what happens is, you then have to find a way to, in post, represent that movie and so much of what is supposed to be there isn’t there, and you have to look at it as if it is there. So you do this weird thing where, you know as a director, my job is to respond to what I am seeing. Here I have to block out things I am not supposed to be seeing and yet respond to the essence of what is going to be there. So it’s a weird mind trick you play on yourself and that’s the hardest part actually.

I know you can’t say much but how are you feeling about taking on “The Batman” and what stage is it up to?

MR: I’m excited. We’re at the very beginning. I just finished this movie. I mean literally, the one thing about doing a movie where the main characters don’t exist until they are realised through the most complicated visual effects that there are today, that means the movie is not done until literally you are done. So I finished the movie about eight days ago

MR: Yeah, literally. That is  what is so weird. I have been working on this film for the last three years, and the last year is all about the realisation of shots. And then what happens is around the time that the last shot comes in, because we will work up until the very end, you’re done. So suddenly I am like, so that’s the movie, and then it’s like, “Here’s the movie”. It’s a very strange process. So, the point of that being, I haven’t even begun working on “The Batman” yet.

But you are very excited about it?

And finally, in the past you’ve said that you see Planet of the Apes as more than just three films, do you still see it that way?

MR: For sure. Yeah, I mean one of the things we were seeding in “Bad Ape”, was this notion that there are more apes out there, that aren’t Caesar’s apes, and that the world is much larger than the apes ever imagined. And I think, those apes might not just be pockets of one and two, there might be communities of apes that wouldn’t have had the benefit of Caesar’s leadership and so the conflicts in the future may not just be between humans and apes, they might be between the apes.

WAR FOR THE PLANET OF THE APES is now showing in Irish cinemas
Words : Sarina Bellisimo