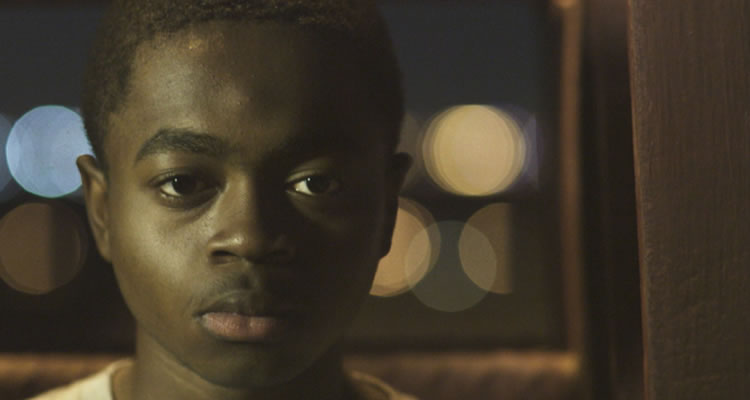 This week sees the Irish cinema release of the low budget vampire flick ‘The Transfiguration’. From first time director Michael O’Shea, ‘The Transfiguration’ tells the story of 14-year-old Milo (Eric Ruffin), who lives alone with his brother; his mother having committed suicide and their father having died when Milo was young. A quiet and lonesome teenager, Milo is harbouring a dark secret; he believes himself to be a vampire.

‘The Transfiguration’ has screened at festivals around the world – including the Audi Dublin International Film Festival, earlier this year – and marks the film debut of a director to watch out for. Movies.ie caught up with director Michael O’Shea at the Cannes Film Festival last year – where the film made its debut – to find out why vampires – in a world crowded with vampiric romances – what inspired him, and the Irish connection with O’Shea and his fascinating film.

I hear you didn’t expect ‘The Transfiguration’ to get into the Cannes Film Festival when you applied?
Michael O’Shea: I don’t think anybody expects to get to Cannes! I was in no way expecting that my tiny, out of nowhere, not connected movie would ever be accepted into Cannes. It’s completely insane. I got in and I was just overwhelmed.

Did you always want to direct a horror movie?
MO’S: I went to film school, and the films that I made in film school – a very long time ago – were not horror films. I was not writing anything genre, and the first script I wrote was about a school shooting, and was definitely not horror. Then I left film, and about seven years ago I met Susan [producer] and she liked my old writing, and she said “You should try again”. I decided I would choose horror because I thought it would be easier to finance. Then I failed! I wanted to make a slasher film and I failed. It was too expensive, I couldn’t attach a director and it just didn’t happen. So I came up with this film. I came up with a story I could tell, where a really small crew was to our advantage, not a liability. We would be shooting in live neighbourhoods and live environments; being fast, being mobile, getting the spirit of places and you don’t have all this stuff slowing you down. Your film is going to look a little crazy, but you can do it, and I love the look of our film.

You said you left film for a while. Why did you do that?
MO’S: My only canvas cost a million dollars! It’s a very arrogant and silly thing to think that the world is going to come to you and give you a million dollars for your thing. When I got out of school, I didn’t even understand what I was doing for a living, so I worked in film for a while and I kind of hated it, so then I just drifted out of it. I had just made a hospital industrial video reassuring patients that they would be OK for Y2K, and it was the worst video ever. Unlike you I don’t know how to interview people, so I was horrible; I had to interview all these people and they were just wooden. I probably scared the patients about Y2K because of how uncomfortable the people were, and the video was edited terribly. I was like “This isn’t how I want to make a living; this is horrible” so I was a taxi driver, a bouncer, I have been fixing computers the last couple of years, but I kept writing. I never stopped writing; I wrote weirder things than scripts but I never stopped making things. I knew I was stuck being a creative person my whole life, I knew that wasn’t going to change. I didn’t give up; I kept creating, I just didn’t try to make movies for a while, but then [for] the last seven years I have been trying again.

What did you think you could bring to the vampire film as a genre?
MO’S: My first thing is to try to be unique, and to be entertaining is probably second [laughs], and so I knew I wanted to try to be brave and to do something original. I guess what I thought was going to be unique was to tell a very human story about a character, and to try and be as sensitive and humane as possible within the framework of things that happen in a horror movie. That was the blend that I was hoping would be unique, would be different. The other thing is that vampires are often so stylised, so I thought it would be fun to do something not so stylised. Vampires are mythical and beautiful, and I thought it would be fun, as a contrast, to do something very gritty and real.

You obviously were not a fan of the ‘Twilight’ films then?
MO’S: [laughs] I like the ‘Twilight’ films. I watched all of them! I read something that Stephenie Meyer wrote them as propaganda to get kids to not have sex until marriage; and I found that really offensive, and I decided I wanted to make the opposite of that. That was in my head when I was writing the script. Also I thought Milo would hate ‘Twilight’, and I thought it was really funny that Milo would hate ‘Twilight’. The idea of ‘Twilight’ and telling Milo about ‘Twilight’ was just a really funny idea to me. Secretly, in my writer’s head, Stephenie Meyer’s thing about keeping your virginity was just annoying to me, and it was this twist of “I want to make the opposite to that”. In a way.

Other than ‘Twilight’, in whatever form, what else inspired you while making ‘The Transfiguration’?
MO’S: I saw a movie, Josh Safdie’s ‘The Pleasure of being Robbed’ that was shot on live locations in New York City; a really beautiful film. What I would call “garbage beauty”, real beauty, the beauty of reality, and I was like “What if I made a horror film like that?”. That got the wheels going, then I heard about a friend of a friend whose kid was getting bullied for drawing vampires – and his name was Milo – he was a little kid, but then I stared thinking about a teenage vampire. When I was a teenager there is this movie named ‘Martin’ by George Romero that I loved; that was maybe the first realistic vampire movie. Then you start thinking about a realistic vampire movie, what is that for me? I thought of this interesting tale of two very different places; where he lives, and where he hunts, and this idea of place. The new New York City that is glistening and nice, and Rockaway where I grew up, which is a working class community, and has a sort of beauty. I knew I could find a depressing beauty on Rockaway; that’s not all Rockaway is, but I knew that Rockaway had this gorgeous, depressing, desolate beauty in some places.

Why did you decide to have Milo be older than perhaps the kid that inspired him?
MO’S: It’s when you become something; this is the age when you become something; whether it’s a vampire, or other things. If you talk to a psychologist, they will tell you you can’t be diagnosed [until] you are 21. You show signs that you might be [something], but your brain is still a piece of wet cement; it’s still hardening. During 13-20 is when your brain is “hardening” and that’s when you are going to become something, and this is a movie about someone who is becoming something, and about their own process of discovery of what they are becoming. That’s why that age was important to me.

There are actually very few vampire films that have an African-American character in the lead role, other than some Blaxploitation films, ‘Blade’ and ‘A Vampire in Brooklyn’. Was that part of the choice when casting Eric Ruffin as Milo?
MO’S: The race was always on purpose. I wanted it to be in this section of Rockaway that’s predominantly African-American, I wanted to shoot there so I knew it was going to be an African-American family. There’s some social realist stuff in there that I wanted to put in there. I knew I wanted Sophie [Chloe Levine] to feel like she is out of place, so I wanted Sophie to be not African-American. There are a lot of reasons why, maybe [the question] is one of them, but that’s a bit glib. I am glad it’s unique! I am glad that there are not a lot before it, but there were a lot of motivations.

I noticed there is mention of an Irish vampire throughout ‘The Transfiguration’, is there a myth that has bypassed us?
MO’S: ‘Carmilla’ is one of the first vampire myths; it’s a book, you can check it out! By the time we meet Milo, he has progressed beyond the vampire books that we know about, and Milo has gone to the other side, so ‘Carmilla’ is good because ‘Carmilla’ is something that we don’t know. Also ‘Carmilla’ doesn’t say the word “vampire”, so when we first meet him, I want things to be very confused still. ‘Carmilla’ is this like 1872 book, also because it’s the fact that it’s a female vampire maybe also sets off some other things too.

…And she’s Irish! Is there an Irish connection in your family?
MO’S: I am actually applying for [Irish] citizenship. I am going to get dual citizenship!

What are you going to do next?
MO’S: I got all these projects! I have two scripts finished; I have the slasher, I have a cross-country murder thing, and I have a ghost treatment ready to go. I have all these ideas that I will pitch to people at a meeting and see what their face looks like!

‘The Transfiguration’ is released in Irish cinemas on April 21st 2017. Watch the trailer below…