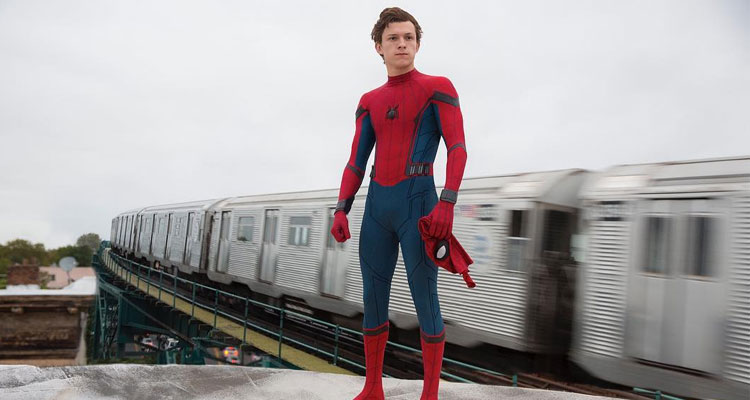 ‘Spider-Man: Homecoming’, has a dual meaning: not only does the film illustrate Peter Parker as the awkward, brainy teenager from the original comics, but it returns his heroics to a world where he’s not the only one with larger than life powers – namely, the Marvel Universe. Following the events of ‘Captain America: Civil War’, young Parker resumes the challenges of everyday life, which feel as life-altering as any costume-clad showdown – even with a new foe, The Vulture (Michael Keaton), swooping in to cause trouble.

Q: How concurrently was this was developed with (Captain America) ‘Civil War’ and what sort of foundation that provided for you when you started developing ‘Spider-Man: Homecoming’?

Watts: Tom was hired right around when I was hired. And I went to Atlanta when they were shooting ‘Captain America: Civil War’.

Q: Did you feel like the success of ‘Civil War’ – and the reception to Spider-Man – emboldened you or gave you an advantage when you were sort of constructing what this was going to be?

Watts: Yes, it’s great. I was there when they shot the scene between Tony and Peter in his bedroom and you see that and you’re like oh, this works. This is great. And you also see that there was this amazing chemistry between Tony and Peter that you just want to see more of that. So that became a really good jumping off point for us to decide what sort of story we wanted to tell.

Q: How easy or difficult was it to use the superhero element to amplify that journey?

Q: You talk about fun. What sort of tone were you aiming for?

Q: How did that enable you to avoid revisiting certain moments of Spider-Man mythology that audiences may have seen before?

Watts: Well, it frees you up to just have fun with the character in the world. Because we’re starting after the origin story, we don’t have to do any of that legwork and we don’t have to do any universe building in that way that they had to do in the previous Spider-Man films because superheroes already exist in this world. The Avengers exist. So we don’t have to tell any of that story. We can just have fun with “what if a 15-year-old became a superhero?” What would that be like? But I mean he still has to shoot webs. That’s like that’s about it – he’s got to shoot webs.

Q When you started on Homecoming, did you make a list of things that you were not going to do? And then were there things that are just so inherent to Spider-Man that you knew you would have to include, and would just have to come up with a more clever way to incorporate them into your version?

Watts: That’s what we tried to do with everything. Like if anything seemed familiar, we tried to come up with something else. The reason to make this movie is to show people things they’ve never seen before and to take them on a journey that they’ve never been on before. So that was actually a great creative limitation, to make everything new. Spider-Man still had to shoot webs and swing around every once in awhile, but then you would come up with, well, what haven’t we seen Spider-Man do? Let’s take away buildings. Let’s throw him in the suburbs and see what he has to do, if he has to go from rooftop to rooftop. Or send him to Washington DC, make him climb up the side of the Washington Monument. What are you going to do then when there’s only one building? What’s that going to look like? So that was the fun challenge, to just keep trying to come up with something we haven’t seen before and keep pushing that.

Q: What was your first experience with Spider-Man? Was there specific material that helped shape the landscape of the world your Spider-Man was going to inhabit?

Watts: Well, I immediately just went back and started reading the comics from the very beginning when I got the job, [and] that was just a great cornerstone for what we were trying to build because it’s a reminder of why Spider-Man became so popular in the first place. And sure all these other people are dealing with these life threatening or world threatening stakes, but one of the first things that Peter Parker does in the comics is he goes to try and join the Fantastic Four because he needs to make some money. It’s just problems that a teen would have. So that was a great starting off point just in terms of the tone, because it was funny and irreverent and just its own unique perspective. And in terms of the visual language, I just was trying to apply my style to this universe and again keeping with this whole ground-level perspective. I wanted this movie [to be] on the ground with Peter; it’s like you’re up in the clouds with Tony, and now here you are down in the dirt with Peter.

Q: How tough was it to find your own way of depicting Spider-Man in action that suits your personality but still has that kind of elasticity and nimbleness that’s maybe a little different than other superheroes?

Watts: I wanted it to always again be grounded in a way where I only wanted to shoot shots that you could actually shoot, like there’s no video game camera flying around doing impossible things. For me, it has to always be within the realm of, you could shoot this with a drone, you could shoot this with a 100 foot technocrane – that was always an essential part of creating the visual language for this. We had to keep it as realistic as possible. What Spider-Man can do is more than what a human being can do. So you do some crazy things, but he can’t break the laws of physics. And a big part of what we’re doing is being really rigorous about making sure this stuff feels as real as possible.

Q: What sort of discoveries did you and Tom make together in terms of Spider-Man as he’s playing the character and you’re directing him?

Watts: We learned to have a lot of fun with it and with the blocking. Some of the moments have a very sort of Michael J. Fox feeling about it – Tom has that Marty McFly [from Back To The Future] spirit in a way that’s amazing, or like Tom Cruise in Risky Business, just that twinkle in his eye. But he’s still a kid and he’s ready for bigger and better things – but he still has to get to like his chemistry class on time. So we had a lot of fun with that and found a lot of humor in those moments and that’s something that we would work on together.

Q: What, if anything, really surprised you about Tom’s performance?

Watts: Do you know what caught me off guard? I mean, he’s so amazing and charming and talented, but he’s also such a precise technical actor and you don’t ever encounter a 20-year-old that has that kind of training and precision. I don’t know if it’s training, I don’t know if it’s just natural, but it was amazing. He could hit his marks perfectly. He could just do slight tweaks to his performance to dial it up and dial it down. And it was amazing. That’s like having a precision instrument – as a director that’s so satisfying. It’s like Tom, can you do that again five percent less excited and can you rotate your mark 20 degrees counterclockwise? And he’d be like, “alright,” and he could do it. I love complicated camera moves and long tracking shots and things like that, so to be able to do that with an actor who can hit all those marks is like a dream come true. It makes it so much easier for me.

Q: How difficult was it to create a story that is self-contained and satisfying by itself without telegraphing elements that might be relevant in future stories?

Watts: What’s great about Spider-Man is that all that stuff is already happening, and then Spider-Man is just in that world. I thanked [director] Joe Russo recently for making all of the serious, complicated movies so that I could then come in and make the Spider-Man one that has fun in the sandbox that [those] guys have all created.

Q: How did you develop the relationship with Tony Stark, as his mentor?

Watts: It’s interesting because it’s part of Tony’s journey. He picked Peter, he introduced Peter to this world and now he’s dealing with the implications and responsibility of that. And then Happy Hogan is sort of the intermediary between the two of them. I think of Happy as being the annoying older brother who Peter thinks is an obstacle between him getting to talk to Tony. And Tony is sort of the reluctant mentor who picked him when he was in a jam, and now looks up to him like, what next? He’s like oh, right, I’ve got to do something about this. It’s a really funny place to put Tony into.

Q: Tony is a bells and whistles guy when it comes to his inventions. But Peter is himself an inventor. Was there a balance that you had to strike between what sort of assistance Tony was going to be able to provide versus what Peter would be able to create himself?

Watts: That’s a great question and we have some fun with that in the movie, because Tony’s really smart and built this amazing suit but Peter’s really smart too.

Q: Looking at what has become an expansive legacy of different stories, what are you looking to accomplish with this Spider-Man tale that will take them on a maybe slightly different journey than they’ve gone on in the past?

Watts: I think everyone loves Spider-Man and I just want this movie to remind them why. Spider-Man was such a revelation when he was introduced into the comics in the 60s because no one had ever thought to show the perspective on this crazy universe that they built. And they made him such a believable, realistic, funny character that I wanted to just sort of go back to his roots in that way. It’s a homecoming for Spider-Man because he’s back in the universe where he belongs and I just wanted to show that and to remind people why Spider-Man is the best superhero of all time. He’s the best. I think you look at that mask and you can imagine yourself in there.