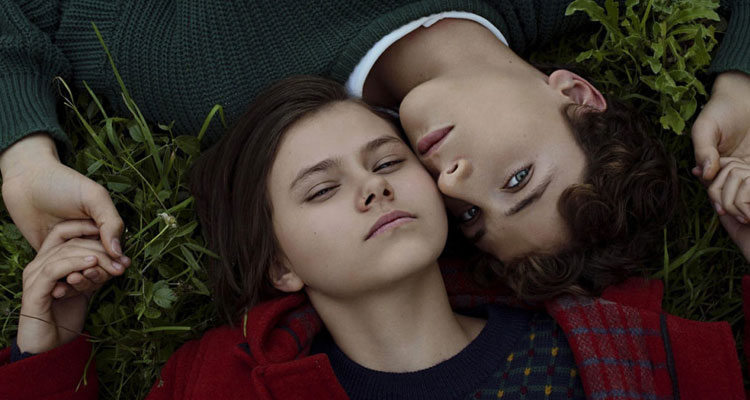 Last years Cannes critics week opener SICILIAN GHOST STORY tells the gripping true story of a Mafia kidnapping  re-imagined here as a supernatural fantasy. We caught up with directors Fabio Grassadonia and Antonio Piazza to chat about the movie.

What was it about the story of Giuseppe and the kidnapping that made you two want to make this film?

We are both Sicilian and we lived those years, the 90’s are the most terrible period of our Sicilian history because it’s a dark period of violence. The 80’s and the 90’s, it was, first of all, a period of the so-called “Mafia Wars”, which counted hundreds of victims. It was like a sort of a hidden civil war. And then in the 90’s, there was an open challenge of the beginning of secession against the Italian State so many victims were journalists, politicians and public prosecutors. The story of Giuseppe somehow, the end of it, but also the most cruel part, almost intolerable, for the cruelty, but also for the obscurity of the situation. Antonio and I didn’t know each other at the time, also we are both from Palermo, but we both decided that for Sicily in our perception not a pleasant situation in that moment. The story, it kept being on our mind for many years, but it was not easy to deal with this story because it’s really, really very sad and full of horror. We needed a new approach to it. We found a story recently, a short story which was telling the story of Giuseppe through the eyes of a schoolmate.

When casting Luna and Giuseppe how long before you found Julia and Gaetano?

It was a nine-month casting. Very long, because in Italy we do not have professional actors so young, so we had to find Sicilian kids with the best experience. And also it was important for us to involve Sicilian kids in this sort of act of love homage to Giuseppe. With the casting director, we were involved with every process of the casting, visiting the schools, every day we were in the schools, meeting the kids, sometimes meeting the parents and the teachers, so at the end of the process, we saw dozens of kids. Especially for the character of Luna, it was a very tough search because on her shoulders the film puts some very difficult things. And right at the end, we met her in the secondary school, from the very beginning we thought “Ok, it might be Luna” because she’s very similar to the character, stubborn, very mature, intelligent.

Where did the idea and symbology of Luna, a fictional character, come from?

It comes from the short story written by Marco Mancassola. The crucial idea of the short story it takes a different direction because Luna becomes an adult. We wanted to stay in the period of the kidnapping. But for us it was important because it needed to be an act of love for Giuseppe through the eyes of a girl in love with him and also because to Luna’s mind reach the impossible, reach Giuseppe, through her visions, through her dreams and nightmares.

What was it like injecting the supernatural and spiritual elements into the film? Especially through your use of cinematography?

What do you mean exactly by the supernatural?

I suppose the ethereal nature of how she’s able to find him through a dreamscape.

Yes, it is the main idea of the story told. In a way, this kid was forgotten. When he was alive, when he was imprisoned, and what happened after his death the last twenty years his story was completely forgotten. Total oblivion. We had to find a way to push this kid and story from the darkness towards the light. So the idea came of telling the story from the point of view of a little girl. The thing that shows the fairytale and allows us to mix in reality and reality is wracked with terror. Because Luna’s story is a story of a friend. So when the pain becomes in her mind too unbearable it’s like she starts recreating new possibilities It’s like only through her dreams, her visions, in her mind she can still find a way to meet him again. And little by little in the film we understand that we are not always in our minds, but in a way Giuseppe, his dream, his side, he wishes for the same thing. And during this double, common dream they find a way to meet again. This allows us the final miracle when it is the dead one coming back to life in order to save her life. So it’s the final solution that life wins again. When we are at the beach, the last scene, it’s like she’s giving her farewell to the dream under the light in the middle of the sea, the sea that Giuseppe liked a lot.

That’s beautiful. When researching this film were you able to speak to any family members or members of the community that would have been around during this?

This story of Giuseppe has been with us for many years. We read a lot of books about his story, also because there was a trial against the perpetrators of this horrible crime. And we read all the pages of this trial. So in a way, we have been able to reveal all the long years of his imprisonment and because we chose the fairytale we thought “we don’t need to know more about this, and we don’t need from anybody to make this act of love for this forgotten and stolen child. So we decide not to ask anything to his family, to the people directly involved in this horrible crime. When the film was ready we called the little brother of Giuseppe. We explained to him who we were and what we did about his brother and we invited him and his family for a private viewing, but for his brother of course, and his mother it is still a huge pain and so they decided not to watch the film. So now, if they watched in the theatre we don’t know because after that contact we never had any other discussion with them.

What was it like writing for Luna and her story? Because it’s very emotional but it’s also fictional. So what was it like fitting it around Giuseppe’s kidnapping?

The story is built as a fairytale, and it’s built through the position of different elements. In a way, we told you it’s dream, it’s always with two elements in opposition. For example, dream and reality, and life and death, and nature and human environment. So it’s a double line. The fairytale comes from reality and truth and we use real moments for his imprisonment. When you see Giuseppe’s imprisonment, his relationship with his jailors, we didn’t create anything. Everything comes from reality. Also, we revealed the location exactly the way they work in reality, the prison, and the kid went to many different prisons but for our reimagining, we decided to use only three locations. And also the final location, the underground bunker, we revealed exactly the way it was. So there, we didn’t create anything. Also, the kind of relations to the jailors and the kind of dialogue, they come from reality, from what we learned from the trials and the books of the story. We allow our art to create this visionary dimension of the story only when Luna is able to establish a contact with Giuseppe. And there we create everything of course. So the first possible encounter we see pertains to the love letter. And so there, we can change things. And also, for example, the scene when the kid was kept in the car and he starts dreaming that he is smelling the sea. That sequence comes from reality, and so it was exactly the way it was told. And then of course through the butterfly we establish and we create the final conflict with the sea, the sea that we will see at the end of the film with Luna and her friends. So it is a balance all the time, we try to respect in building our world.

You spoke on your connection to Giuseppe. You both grew up in Sicily, and how you wanted to give him the love and justice he deserved. Now that the film is done and you have the opportunity to look back, how do you feel?

Our most important moment was in Sicily, the contact with the younger audience because they didn’t know the story anymore. Even the kids in the film didn’t know the story. It was hard telling them the story when we started working together in the long duration of the film. At some point when the film was released in Italy it was adored by the younger audiences, and also by the schools. So the film was released in Italy one year ago, and in Sicily almost every day there are school screenings every morning, everywhere in Italy but especially in Sicily. In Palermo, every kid in the schools have seen the film and their reaction is very emotional, and they are very curious to know more and they Google the story of Giuseppe and they always want to talk with us, they want to talk to young actors involved. That was the special gift for everyone involved because the core of the film is Luna fighting against indifference, is fighting against obedience so now we know that people are remembering Giuseppe forever