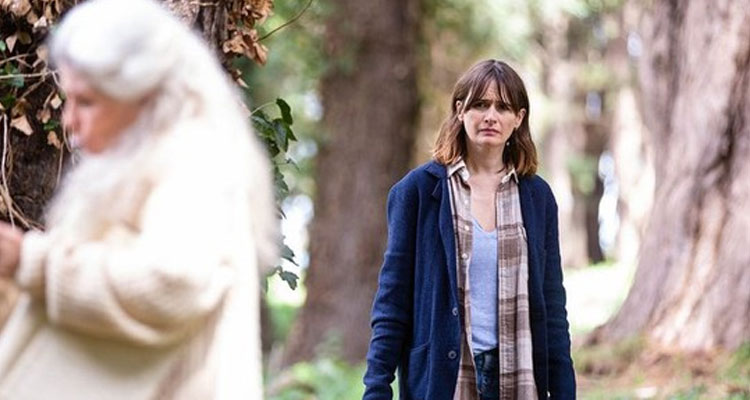 Kay (Emily Mortimer) and her daughter Sam (Bella Heathcote) arrive at the family home of Kay’s mother Edna (Robyn Nevin). Edna has gone missing, prompting an anxious Kay to find out what’s happened. When Edna suddenly re-appears as if nothing had happened, Kay becomes concerned and starts to become the parent. The onset of dementia has taken effect on Edna, to the point where she no longer recognises her daughter and grand-daughter. As Edna recoils from them, her behaviour becomes stranger. A dark patch starts to grow on her chest and appears to be linked to a similarly dark figure stalking the house – a manifestation of Edna’s corrosive dementia…

Congratulations on Relic, so this is your feature film debut what was the experience like?
It was pretty amazing. I mean it’s a goal you have when you first think of becoming a filmmaker when you’re 13 and however many years later you finally get to do it. In some ways you get there and you’re like wow I hope this is what I want to be doing but I’m happy to report that yeah every day was tough but every day I went home going this is exactly what I want to be doing for the rest of my life. It’s very gratifying in that way.

Were the seeds sown for the story of Relic with your own personal experience of dementia with your grandmother?
Yeah, they were actually. In fact, it was a trip I took when I went to visit her that I started writing it and I guess the trip was special in a way because it was the first time she didn’t recognise who I was and the reality of her condition really hit me and there’s a lot of guilt not seeing her more often and I think I’ve said this a thousand times before as well. She lived in this creepy traditional Japanese house that for me as a child spending my summers there it really creeped me out. I would have nightmares there, trying to get to the bathroom at night was a nightmare for me. Your brain has a way of connecting the dots and those two things coalesced in my mind.

You spoke there about the creepy old house and in this film there is a creepy old house did you take much inspiration from your childhood and then collaborate with the production team?
Yeah absolutely. I was a massive scaredy-cat as a kid. I feel like until I was 7 I would wake up in the middle of the night and just run to my parent’s room and they’d have to put a sofa in the room to like do away with me. I’m attached to the idea of childhood fears particularly as it relates to Relic because in a way throughout the course of this film the character Kay keeps having these recurring childhood nightmares and at the same time she’s losing her mother and in a weird way when you’re a kid your parents are your safety net and they’re there to chase away the bad dreams and so the idea of losing that is particularly scary because you’re losing your safety net and a lot of time you have to start parenting your parents so there’s this very fraught and sometimes heartbreaking role reversal that happens.

So how was it casting this family to convey all these emotions genuinely? Did it take long to find Emily (Mortimer), Robyn (Nevin)and Bella (Heathcote)?
Yeah, it wasn’t like any other casting process I’ve been a part of. Prior to this film, I had only done shorts and music videos and commercials where you audition people essentially. This was more about having creative brainstorming. Looking up their old work and thinking imaginatively. It wasn’t a particularly long process. I was blown away by each of them and how they connected to the script. Even from my first meetings with them, I could see them in those roles.

What kind of process did the cast go through to gain such a genuine rapport?
It’s funny, isn’t it? The grandparent/grandchild relationship is not as complicated as the parent and the grandparent. I feel like a lot of it came from the discussions we had. We didn’t have a lot of time before we had to start shooting with all three actors. Emily’s flight was delayed for 3 days. A lot of it came to getting used to each other as well as the stunt rehearsals which were really great bonding exercises. Robin, for example, would write letters to Emily’s character Kay. So yeah to reiterate a lot of it was found through discussion.

You touched on the stunt work there. What was it like getting to let loose in that final act because it’s a nuts scenario.
So fun. I love doing stunts and prosthetics. One of the things my production designer Steven Jones-Evans and I talked about was the idea of a slow descent and it’s reflected in the structure of the film. The idea that with Alzheimer’s you quickly adjust to the new normal and you almost don’t realise how bad things have gotten until you have taken a step and we wanted a similar effect in Sam’s discovery. We didn’t want a discernible break from reality that’s why we chose to use the architectural language of the rest of the house in this space.

We tried to mimic the effects of dementia in the structure and if you think about people who have dementia their mind works in loops a lot. There is a thing about people with Alzheimer’s who are given a recipe they’ll often repeat the same step or they’ll skip a step. We just tried to build that into the design of the house. It was a lot of fun trying to figure that all out. The inner world of the house came from two things, my grandmother had a lot of hoarded objects and one image I had in my head was this room filled with items that kept going and going. The other idea came from a documentary I watched with a man who had Alzheimer’s who was describing the sensation of feeling lost within his own house. He’d often go to the kitchen and forget how to get to the living room.  The house can easily be read as being emblematic of Edna’s mind and Kay and Sam are drawn into that experience and ultimately trapped.

There is also the element that is touched upon that this hereditary. How did you find that balance when you were writing it? The horror that is happening to the family to also understanding the tragedy that is happening to them.
In some ways, they both work hand in hand. In a way, you have to allow the real-life horror to dictate the horror on screen. We definitely got some pushback when we were shopping it around. The structure of it and the fact that it’s a slow burn and a lot of the pushback was about bringing the horror elements forward and having more scares at the beginning which is fine in theory but if it feels forced then you really feel the writers hand at work because the story hasn’t earned it and the situation hasn’t earned it.  It’s tricky because you have to deliver on the horror promises but I think it was most important to never lose sight of the fact that we’re telling a story that has to have real emotion. It’s inspired by the true horrors that come from life so it has to remain true to that. It was tricky.

One of the hardest things to iron out what the menace in the film wants. What does Alzheimer’s want? We had to imagine it as some kind of elemental force that only seeks to destroy. It’s not like a demon who wants someone’s soul or a vampire that wants blood.

So, if we can discuss another aspect of the production of Relic there is a scene in the final act, I’ll simply call the unwrapping scene. What was that like to film?
That’s such a pleasant way to put that. I’m a massive fan of prosthetics and trying to keep everything as practical as possible. It was 70% practical and 30% visual effects. We broke down the scene into about 8 or 9 stages that started with a simple bruise and a lot of bruising. We also had a stunt double for some of the more taxing scenes. Eventually, we had a silicon puppet that had animatronics which was so cool. First time I saw it I kind of burst into tears because I was so impressed with the nuance that they could get into the facial expression. It also had this breathing mechanism which gave it movement. It was there to show the fragility and humanity of people who are at the end of their lives. It was such an important production element that I was over the moon when they pulled it off. A lot went into it, we’d have to prop it up, at times reset the skin. All of those things were time-consuming. There was also the fact that this practical item helped Emily just really connect with its presence.

What’s it been like finally getting to talk about this film after working on it for so long?
It’s been really great. I don’t know the best way to describe it. I wrote it over 4 years, then I shot it for however long but then pos production you are being slapped in the face with this thing for 8 months so you quickly lose perspective and I never could have anticipated everyone’s response was going to be like. Honestly, I’ve just been thrilled and taken aback. The important thing was people reaching out and how it resonated with them and how they shared their own stories. It was the most rewarding part of the film.

What do you hope audiences take from it?
That there is a sense of catharsis. To also highlight that beauty and horror go hand in hand with inevitable death. That there is a lot of darkness but there’s a lot of love. I feel that if you can see yourself or your personal experience reflected on screen it can help you feel less alone. To feel seen. If there is even a hint of that, I’d be very happy.