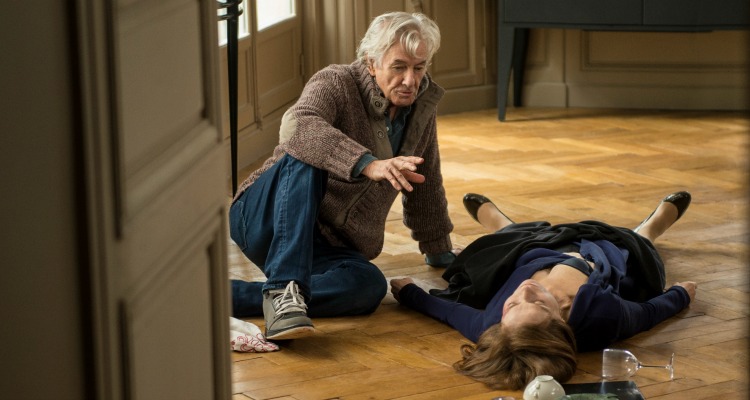 Interview with Paul Verhoeven for ‘Elle’

Released in Irish cinemas this week, ‘Elle’ is the story of Michéle (Isabelle Huppert) who is violently raped in her home, but reluctant to involve the police since her father committed violent acts when she was a child. Michéle opens up to a few friends, but carries on in her life as though nothing happened. Flirting with a married neighbour and drawing her attacker back to her, Michéle sets in motion a chain of events that will change her life forever.

Given the controversial and borderline perverse subject of ‘Elle’ it is perhaps not surprising to learn that the director of ‘Showgirls’ and ‘Basic Instinct’, Paul Verhoeven, is the man behind ‘Elle’. We caught up with the director at the Cannes Film Festival last year to find out more about the film, and when he plans on returning to Hollywood.

This is your first French film. How did it come about?
Paul Verhoeven: It’s the producer of the film, Saïd Ben Saïd who sent me the book by Philippe Djian, and he asked me if I would like to make a film based on the novel. I read the novel and said yes! It’s very simple. It wasn’t a complicated situation; the film slipped naturally into my life and I felt it was a minor miracle to find something so new that I had never done before.

You have gone from European cinema, to Hollywood and back again. Do you feel the DNA of Hollywood is still in your films?
PV: I think basically what happened is that in the beginning when we started to think about the movie I walked with an American scriptwriter, David Birke, and I thought what I brought from the US to France is basically what he did with the novel. Of course, we had conversations about that, but ultimately the screenplay is certainly not my work, but I think bringing in an American scriptwriter, and following that path of more structured and visual way of saying things, I learned that in the United States. I used that also in ‘Black Book’. It’s a hybrid, but I am too. I am Dutch, but I am supposed to be American.

How important was the novel to you when making ‘Elle’?
PV: I think the most important thing is the time it took for David [Birke] and me to see the real structure of the book, and not to Americanise it. At the beginning we Americanised things a bit, and then when you re-read the novel, you start seeing why he put the information [the way he did]. That was really very interesting, that you should really listen to the novel, to the tone of the novel, but not necessarily to everything in the novel. The novel for me, was of course very important, we respected the novel for good reason.

Speaking of which, you were originally going to make the film in the US…?
PV: Yes but that was perfectly normal. Saïd had made films with Polansky, Brian De Palma, and others, and it was natural to think that we might make an American film. Saïd called me up and said “What should we do? Isabelle Huppert is a fantastic choice, it’s a French novel, it takes place in Paris”, so we changed the location. I am very happy with that decision. Paris, and France, gave me Isabelle. She inimitable, she could only exist in France.

Are you concerned that audiences may be offended by Isabelle Huppert’s character’s reaction and response to being raped?
PV: No. In the last moments of the movie, the expression of Michéle is very very special. In her eyes you can see, like a small smile.

Why did you decide to make Isabelle Huppert’s character a director of a videogame company?
PV: In the book she is a director of a group of screenplay writers, and for film I thought that it was not very visual, talking about screenplays etc. I put it on the table with my wife and two daughters and said “It seems a problem, is there something better?” and my youngest daughter who is a painter said “What about videogames?”. Then I found out that David Birke knew everything about videogames [laughs]. So we added the notion of videogames, and the story of the videogames has some parallels with the real narrative, so I think it was a very visualisation of something that Phillipe Dijan had already written.

I read that you admire Stravinsky’s music. Did this influence your composition of ‘Elle’?
PV: I think what I learned from Stravinsky is to be short. That is an important point, there are no superfluous notes; Stravinsky is so very precise. I have always admired that. I can say I used that in the film, I use it to look at the actors, the screenplay in order to ensure the scene has a given pace and movement. I want there to be a real movement in the film, I want things to push forward. I think Stravinsky’s music does that, for me at least.

You made some of the definitive American films of the 80s and 90s – including ‘RoboCop’, ‘Basic Instinct’, ‘Starship Troopers’ and, since it is now a cult classic, ‘Showgirls’, do you have plans to return to American cinema?
PV: If there would be a good screenplay, yes. I haven’t seen much of that in the United States. I think America [is going] in a certain direction, or I have already done [it] or it doesn’t interest me. I think what I got here from Phillipe is something different. Sure, there are elements that I have done, but in general, it was something new for me to do this kind of thriller, and also with little bits of comedy. I miss that, I can’t find really interesting American scripts. That’s why I did ‘Black Book’, that’s why I did ‘Elle’, because it interested me. I always felt that I make movies because I like to do that kind of movies, and not because I want to make money or something like that, I think that’s boring. It comes anyhow when you’re good! [laughs]

You seem to have influenced US directors like Joss Whedon and J.J. Abrams. What do you think of them? And what do you think about the future of cinema?
PV: I’m not so positive about the further development about all of this science fiction stuff. I have the feeling that everything has been said and done, and that we should go back to normality. All these big superheroes and whatever, I don’t know what kind of dream this is of the United States, but I feel that we have lost contact completely with normal people, and the story of us is more interesting than that of a superhero.

‘Elle’ is released in Irish cinemas on March 10th 2017. Watch the trailer below…