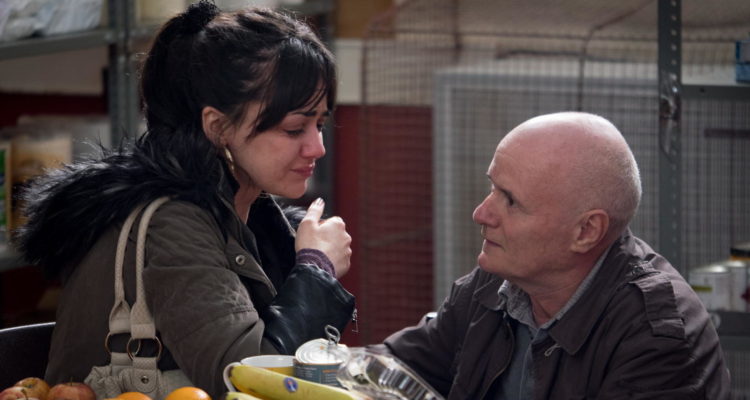 This week, Ken Loach’s latest film ‘I, Daniel Blake’ is released in Irish cinemas; his first since he – falsely, as it turns out – announced his retirement after ‘Jimmy’s Hall’. ‘I, Daniel Blake’ follows two people, Daniel (Dave Johns) and Katie (Hayley Squires) as they try to navigate the injustices of the social welfare system in the UK.

‘I, Daniel Blake’ won the coveted Palme D’Or at the Cannes Film Festival earlier this year, and Movies.ie sat down with screenwriter and long time collaborator with Ken Loach, Paul Laverty, to find out more about this heart wrenching film, and where the story of Daniel and Katie came from.

Where did ‘I, Daniel Blake’ start for you?
Paul Laverty: A lot of it is gut instinct and interests; because I am so close to Ken [Loach] we are always talking about things. I suppose what did attract our attention was all these vicious programmes on British TV, they find some vulnerable character who has got too many tattoos and is overweight and has got a drink problem. It’s just a quirky thing and a life on welfare. There is a whole stereotype of humiliation on them. What really attracted my attention was this massive distortion of reality because they did all these studied and they thought the average was 30% of the welfare budget was claimed fraudulently. That’s what most people thought, but they actually did studied and found out it was actually 0.7%, and not only that, but the benefits that were unclaimed dwarfed the small percentage that was fraudulent, which again was dwarfed by the massive amounts of unpaid tax. It’s very interesting when you see a whole web of lies and a public perception that was so distorted. When you look at it you find a massive campaign against people on welfare. That fed into it.

You spoke to what seems like hundreds of people while researching this film. How did you narrow down the story you wanted to tell?
PL: That was the hardest bit really. To get your head around how the whole system works would break your bollocks really. Trying to understand it all because it’s all so complicated and fragmented. You end up with Universal Credit coming in and trying to follow the system. I have a legal background from many many years ago, so that helped trying to break all that down and figure it all out. Then you have got to forget all that, and you have got to hear the stories. Then you have got to forget all that and make a strategic choice, because in essence the film is… You hope it works very sparsely and simply, but hopefully underneath you find a sense of something much bigger and more important. Katie and Dan came to mind. Faced with a blank sheet you have got to give someone a name, you have got to give them an age, you have got to give them a sex. You have got to design their family. So that’s what came out after all that in the cement mixer.

The neighbours who are selling counterfeit trainers, was it just another examination of how people are forced to survive?
PL: I met kids who were doing exactly that. It’s a reflection; Dan is in that world where he looks at a computer and he may as well be a monkey looking at a typewriter; he just doesn’t understand it, although he could build a house. These young kids have managed to find someone in [China] who are equally as savvy. You see the globalised world just at their fingertips, and these young kids have somehow found a way to do it. It shows creativity, it shows globalisation, it shows how the world is changing, it shows how quickly payments can be made. I know it’s a daft little scene, but I think it taps into that.

Where did the title come from?
PL: It’s funny because I remember one day I was in a café, and the end scene just came to mind. I know this goes against all the great storytelling gurus who say “You don’t say what you mean” and all that, but sometimes you do have to say what you mean, and the title just came to mind; ‘I, Daniel Blake’. It just came. It was existential, it was like I exist, I matter, I am me. In the moment I felt quite touched by this imaginary figure while I was having a cup of tea.

Did you learn anything that surprised you while you were researching this film?
PL: When you hear individual people’s stories they always touch you, but there were quite a lot of older people who had fallen into ill health, who had worked all their lives and then been denigrated as chancers and scroungers. You saw that it got to their core. They were absolutely infuriated, their sense of injustice about it. That got me because you see it in people’s faces. The detail and the cruelty played out in people’s lives always gets you. From the very beginning we had a sense that this film was going to be raw, because what we felt was raw; there’s food, shelter, heat. People have been doing that since we were cavemen, and there are still people struggling with that in the fifth strongest economy in the world [The UK] and you just think “this is fucking crazy”.

Was there any particular reason you decided to set the film in Newcastle?
PL: We have done quite a few films in Glasgow, we have done a film in Liverpool, Manchester, London. It’s always quite interesting to go to a new place and there is an enormous sense of vitality in Newcastle. The Geordies give you a lot; the people are very very warm. The people give life to the scenes, even the smaller scenes and all of that is drawn from the community, there is a vitality to them that I really liked. It was a great city to shoot in. I really really enjoyed it. I like the Geordies.

After ‘Jimmy’s Hall’ did you think that Ken Loach was going to make another film?
PL: I had my suspicions really. ‘Jimmy’s Hall’ was actually deceptively large because he was casting for six months. Every dancer, every musician, all the extras. When you are doing a period piece you have to create every single frame, you can’t live off the street. Whereas with this one we had a small cast so we could live off the street, it was much lighter on him. By doing that, that just meant there was much less hard grind, I think he just felt tired after ‘Jimmy’s Hall’.

At a certain point did he come to you and say I am ready to make another film?
PL: Nah, it’s all organic. He’s got the curiosity of a teenager really, and he’s also so vital. He’s vital about everything, not just film. He’s just aware. Some people have got an electricity about them. It takes tremendous energy to get a team together and just do it. It’s a huge physical effort, quite apart from an intellectual effort, but he comes to life with it, and he gives a team life. It’s a very particular talent.

Do you hope that this film has an impact?
PL: I think you can hope. This is one tiny little film in a maelstrom of films of much bigger budgets, much bigger capacities to promote themselves, a much bigger corporate media who are not particularly interested in this story. You’re throwing a little pebble and you hope it entertains people, you hope people are not bored and fall asleep. You hope that it will lead to some reflection. That’s why we tell stories to each other isn’t it? To try and understand how things are going. Storytelling is as old as the hills, and if you lose faith in people’s curiosity, you have lost faith in being a human being.

‘I, Daniel Blake’ is released in Irish cinemas on October 21st 2016. Watch the trailer below…