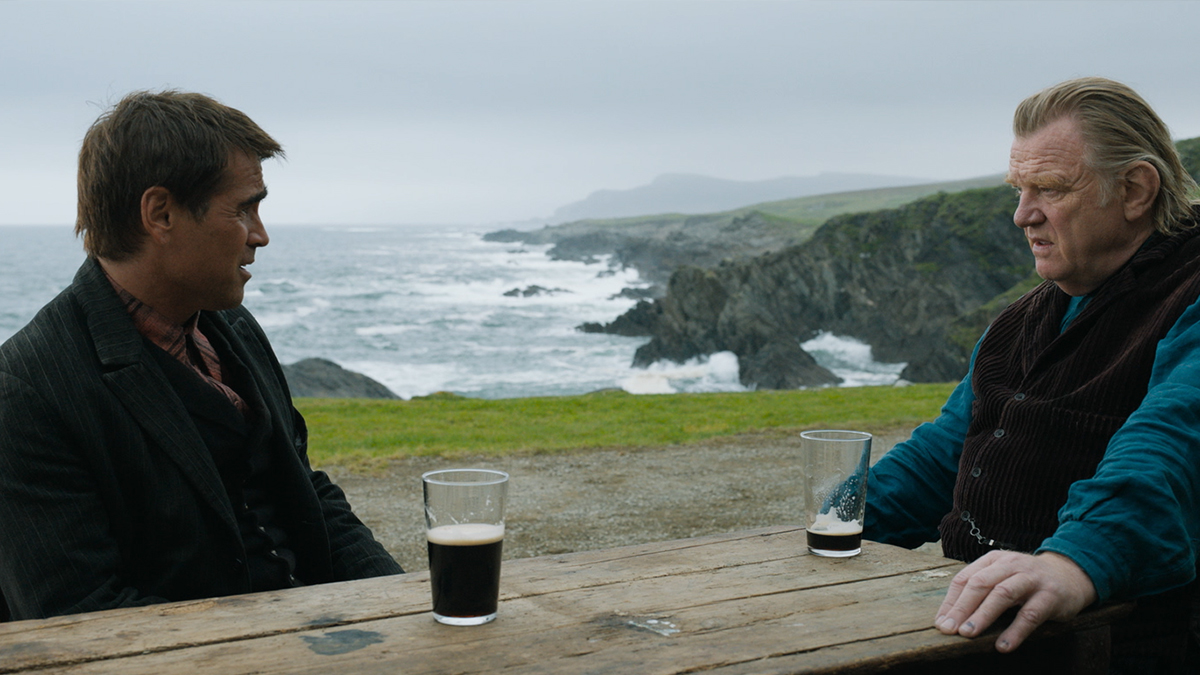 The Banshees of Inisherin reunites Colin Farrell and Brendan Glesson with writer-director Martin McDonagh for the first time since the trio worked on In Bruges in 2008. The film follows the story of Pádraic (Colin Farrell) and Colm (Brendan Gleeson) who fall out following years of friendship causing all sorts of issues for their friends and neighbours on their small island home, Inisherin. The film, which also stars Barry Keoghan, was filmed in the West of Ireland. Martin McDonagh tells us more about it.

Where did you get the idea for The Banshees of Inisherin?
I was interested in writing a breakup story and a breakup between two fellas, two platonic blokes, and to treat that quite seriously was the germ of the idea. To see how sad, funny, but sad you could make it. That was the impetus.

At what point do you know whether the script you are working on is for stage or screen?
It’s always pretty immediate, if it’s something that’s set in a couple of rooms or something as basic as that, it’s going to be a play. If you can see the cinematic scope or locations like this [Banshees], which was all the west of Ireland, Bruges, or American landscapes, then you know that you have to capture that stuff on film. It’s always quite an immediate decision.

What was it like bringing Brendan Gleeson and Colin Farrell back together?
That could have also been the answer to your first question; the germ has always been to get them back together ever since In Bruges came out. It’s crazy that it’s been 14 years since we made that. I can’t believe where the time has gone. Bringing them back together was always a big, big thing I wanted to do. I’m so glad I’m the first to do it. No one else elbowed in. I love working with them. They’re always fun to be with and to work with, and they’re so good. I was thrilled that they liked the scripts. That would have been bad if one of them hadn’t. It was a dream to get them back together and to work with new people like Barry [Keoghan] and an old friend like Kerry Condren. We’ve done a bunch of plays together over the last 20 years, but never while we did a little bit on Three Billboards [Outside Ebbing, Missouri], but we’ve never had much time on film together. It’s a great bunch of actors to get together; it’s a proper little Repertory Company of the best of Ireland.

Do you have a shorthand?
Completely. The cast is only 10 or 12 people, and I think I’ve worked with about 10 of them before. Barry was the only one I hadn’t worked with before, but we hooked up a couple of times in New York and other places. I’ve been following him for years anyway, and I think he is the best of his generation, and I always wanted to get him into something. It’s so easy for me with Brendan and Colin; there are never any arguments, there are discussions, but it’s always joyful. It’s always fun, and I’m looking forward to the festivals in Venice and Toronto and hanging out with the boys again.

Are you a collaborative director, or are you more hands-off my script?
I’m the second for sure. I listen, and then I ignore it. Being serious, the actors trust me that I am always going to listen, so in that sense, it’s collaborative, but they also know that the script is the script, and we’re not going to change it. There is leeway; there’s discussion all the time. But I think they trust me to have done my job, just as I trust they will be there as brilliantly when we get together.

Do you bring elements of theatre to your film work? Do you have time to rehearse?
Yeah, always, on In Bruges, we had three weeks, just those two boys sitting in a room talking about character and history of the characters and why they ended up doing the things they’re doing, that kind of stuff. Similarly, with this, we had two weeks with the boys and all the other actors to go back through the history of them, you know why they ended up in this place, what happened? What’s been happening in the year before, in the week before? Just who they are as people. I think it’s obvious because I wrote it, but we need to talk those things through to convey exactly what you’re getting at sometimes, especially if it’s a comic line. You would think you would just play it for the comedy effect, but usually, you never do that. You try to get the truth behind it and never go for the laugh. Take In Bruges, for example; we find it funny. I find it funny, but when they were playing it, I know Colin was always in a dark place and never enjoying the fun of the lines; I think that’s why it works.

You love the dark side, but there is always so much comedy. How do you balance the darkness with comedy without going too far to either side?
I’m not sure yet, but I think if you just stick to the truth, then the comedy will take care of itself, and the darkness will take care of itself. It’s hard to answer, but I think looking for the truth is always the most important thing. Some stories are darker than others. Some are sadder than others. Seven Psychopaths is probably more on the broad, funnier side; Three Billboards starts from such a dark place that it is less funny. It’ll be interesting to see what people think of Banshees. I’ve got my opinions of where it falls on that spectrum, but I’ll wait to see how the reviews go. I’m intrigued by how people would judge it: comedy or drama or comedy drama or whatever.

Your play, Hangman, was one of the first to close on Broadway when the pandemic hit, and then you filmed Banshees during the lockdown. Going into filming, were you worried about further Covid delays?
We were worried but it turned out completely fine, possibly because we were so isolated on Inishmore and Achill. We had all the precautions in place. The initial delay helped us. You have time to plot everything we usually rush in the weeks before to finish. The more time you have to think about a film, to work with the designer and the DP before filming, the better. A year before we shot, those boys and I were in a house in Galway, talking about the film, plotting through every image, and the tone, so we were well prepared. We stalled again because of the lockdown just after that, but it was fine because we knew what we had prepared. Once we got the go-ahead, we felt like we were grounded.

The west of Ireland can have inclement weather; did it present a challenge?
You would think so, but last summer was the most beautiful summer in Ireland I’ve ever experienced, so it was perfect. We thought we would have to worry about rain, but it was like a dream, almost unrealistic. We had sunny days every day, and we got a few rainy days in Achill at the very end because we shot into, I think, October, maybe even November, but we tried to manage those scenes. If we wanted a sunset, we would put it on sunny days and shoot late into the night. The weather was perfect, the people on Inishmore and Achill were a dream to work with, so helpful, and I got to stay in Galway for prep, I love it there, so there are only positives.

It sounds like you were blessed.
It felt that way. Colin, Brendan, and I turned to each other at some point on Inishmore and talked about it. There is something spiritual about that place anyway, but we felt so good. We just hope it shows in the film. It looks beautiful in the film, but yeah, we just felt like everything was going right.

Brendan Gleeson is playing the violin in the trailer and sounds like a pro. Is it him playing?
It is him; he plays all the pieces in the film. He wrote the tunes that his character plays in the film. I wrote both parts for Colin and Brendan, but I wrote Brendan’s character that way because he’s a brilliant fiddle player. I think he’s almost as happy when he’s playing as he is acting. It’s something we wanted to capture on film.

There is a huge love for In Bruges; audiences really embrace Colin and Brendan and can’t wait to see them again on screen together. Three Billboards is critically acclaimed and multi-award winning. Do you feel pressure to match expectations?
No, not really. I’m not really into Hollywood, who is the best, who is the new one-hit-wonder which might be because I only work on my own scripts and leave four years between each film. It will be impossible to match Three Billboards because that was just a crazy anomaly, or I don’t think, well, who knows? The only thing I worry about is not disappointing In Bruges fans. It’s not a sequel. I wouldn’t want anyone who loves that so much to come to this because of their love for In Bruges and then not enjoy this. They’re very different films, but it’s at least as good. I think In Bruges fans will be surprised by the dynamic between Colin and Brendan. It’s very different, but it’s really meaty and enjoyable, so I think it’s going to be okay.

We touched on this earlier when you write some scripts only for stage, others for film, but have you ever thought about adapting your plays for the screen?
No, I am dead set against all that. Plays should stay plays, and film should stick to film.

Do you believe that about your work or all plays?
That’s with everyone else’s work as well. I’ve seen maybe two good films made from plays ever. I won’t tell you which ones but they’re not from recent years.

What can audiences expect from the film?
A fun cinematic, dangerous, exciting, surprising, strange night out.

THE BANSHEES OF INISHERIN is at Irish cinemas from Oct 21st