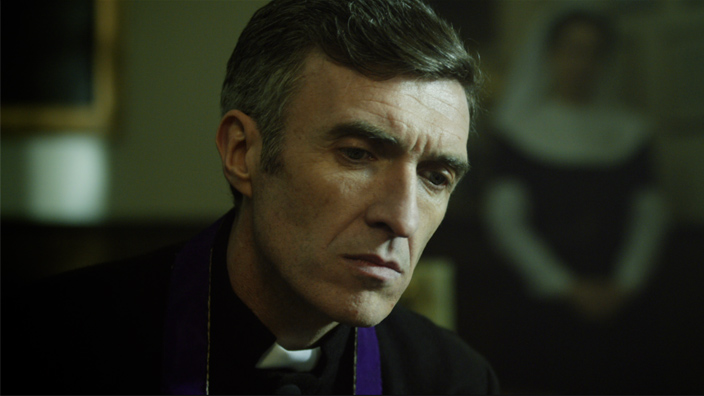 Proving that there’s nothing scarier than a reassuring Irish priest in Viko Nikci’s Cellar Door, MARK O’HALLORAN talks to Paul Byrne about Irish film, serving the story, and the greatness of Adam & Paul.

Dwelling in the dark, disturbing shadows, somewhere between The Magdalene Sisters and Eraserhead, Viko Nikci’s Cellar Door is a horror story all about slowly losing yourself. It’s about remembering, forgetting, time playing tricks on the mind. Which is why, perhaps, that the increasingly troubled Aidie (Karen Hassan) has found herself in a “home for girls who have a problem with time”, as one of her fellow residents describes it.

The same resident (Leah McNamara) offers the determined-to-escape Aidie the ominous line that “this is a rest-of-your-life kind of place”, but this mother won’t give up her desperate search for her son. Which, as you may have gathered, is all very Twilight Zone, only with the extra-added chill of being set in deepest, darkest Catholic Ireland, back when the church had all the power and authority of The Death Star.

For the multi-talented Mark O’Halloran – a man who is always writing, acting or producing, on stage as well as film – playing the part of the reassuring Kassel was all about helping another filmmaker make another kind of film. “For better or worse, I’ve never been commercially-minded,” he says. “For me, it’s all about the work, and finding something that actually has its own particular kick, its own particular favour. Which, when I think about it, is all for the better, of course…”

PAUL BYRNE: Got to admit, found Cellar Door hard going, and then, finally, some relief, some light at the end of the tunnel…

MARK O’HALLORAN: I know what you mean. This is a unique, exciting new voice, and that’s always exciting to be a part of. Also, I’d never played a priest before, and even as part of my writing, I had never created one. Today, if you have a priest in your story, they automatically become a symbol of something. And now it’s something sinister, which is kind of a shame. It might be time to get over that, something that Calvary cut across.

The film is like a stylistic experiment, in many ways, and Viko delivers a very brilliant piece of editing. The set was tight too, great to work on, and I like the fact that he had such ambition for a relatively low budget. Viko was trying to find a new and exciting way of cutting a film, or realising a story, and I think he achieved that. This isn’t your typical Irish film.

Were there certain movies that you all tapped into here. Shades here of Rosemary’s Baby, The Magdalene Sisters, even Eraserhead…

Yeah, we talked about a lot of movies, but, the script is quiet unique, in its own way, as well. The horror element around being pregnant, or losing a child, that’s all there, but, for me, there was also a sense of Aronofsky about it too – that same kind of kinetic cutting. There’s that Rosemary’s Baby sensibility too, which just shows you the ambition of the director. For a long time, you really don’t know what’s going on, and that works for me.

I should add a disclaimer into the conversation at this point – truly believe that Adam & Paul is just about the finest Irish film of the last 25 years. Or more.

It’s a film that I’m incredibly proud of still. It’s not often that you get to do a piece of work where you both enjoy the process – enriched greatly by the process – and you love the product at the end. That’s what Adam & Paul has been for me. It was a life-changing event. There are not many people that have a piece of work like that in their lives. Where you go, “Yep, you can’t argue with that.” It was my first big outing as a writer, and as an actor, and it pretty much spoilt me for the rest of my life…

You’re an incredibly busy man, on stage and on film – is there an ideal here? Is some of it just work to help you feed the other…?

I absolutely love the theatre, and I love acting in the theatre – it’s a completely different experience for an actor – but, ultimately, the process is the same. You’re telling stories through a character, through dialogue, so, I wouldn’t ever change the mix-up of stuff that I’ve done. At times I crave the stage, because you get an immediate reaction, whereas with film, it’s like you’re constantly stuck in rehearsals. When you see the final performance, you’re away from it.

You have Shane Meadows’ TV mini-series The Virtues coming out soon too…?

Yeah, this is based on a play called Trade that I did a few years ago, and which did pretty well for me. It’s about an older man who falls in love with a prostitute, and his life is ruined because of it. Which sounds grim, but it’s not that kind of story, and I think it follows on from other work that I’ve been doing, from Garage to Viva.

Do you think about the commercial side of this tough business?

It is a tough business, but, the work that I’ve done, like Adam & Paul or Garage, or Viva, or even the recent Citizen Lane documentary, these are not highly commercial prospects, but they do alright. A lot of people saw Adam & Paul, Garage did very well, same with Viva – they all made back their budgets, and more. And that always surprises me, but, if you put enough hard work and love into the work, it will find an audience, even when it’s not your typical night out at the movies. And not all films are for everyone, and I don’t think there’s anything wrong in making films that are really for a small audience.

I don’t go to big blockbuster films because they’re just not my cup of tea; I love finding smaller, stranger, more ambitious films. So, I’ve no delusions about not reaching the commercial breakthrough that I’m dying to make – that’s just not an option, basically. I’m there to make the small films that I love to make.

The way most people view movies now is at home, with either big kick-ass TVs or even just their handheld computer. It changes the business, but it also changes how films are being made and marketed…

It’s a shame really, because I love watching films on the big screen, being part of an audience. You see a film differently in that environment, where you’ve collectively opted to stay quiet, and get lost in the story. There’s an incredible magic to that…

When you look at The Virtues, this is part of Shane Meadows move from the big screen to the small, because he’s really interested in long-form storytelling. Suddenly, you have hours to tell a story rather than 90 minutes, and that’s a big draw for filmmakers. And I enjoy that long-read kick that TV has embraced. I’m currently shooting a 10-part TV series over in Rome, called The Devils, and it’s just amazing the volume of stories, and seeing the writer and the director trying to keep a hold on all of it. I’m a short story kind of writer, so, I find that fascinating to watch.

Given your love of the form, and your success as a writer, actor and producer, how come Mark Ignatius Horatio Bartholomew O’Halloran hasn’t directed a film yet…?

I think I’ve just put that on the long finger, because I’m happy being second-in-command. I have more than enough work to be getting on with, and taking on the role of director would be somewhat all-consuming. Never say never, but, for now, I’m happy to keep on getting ready for that step… 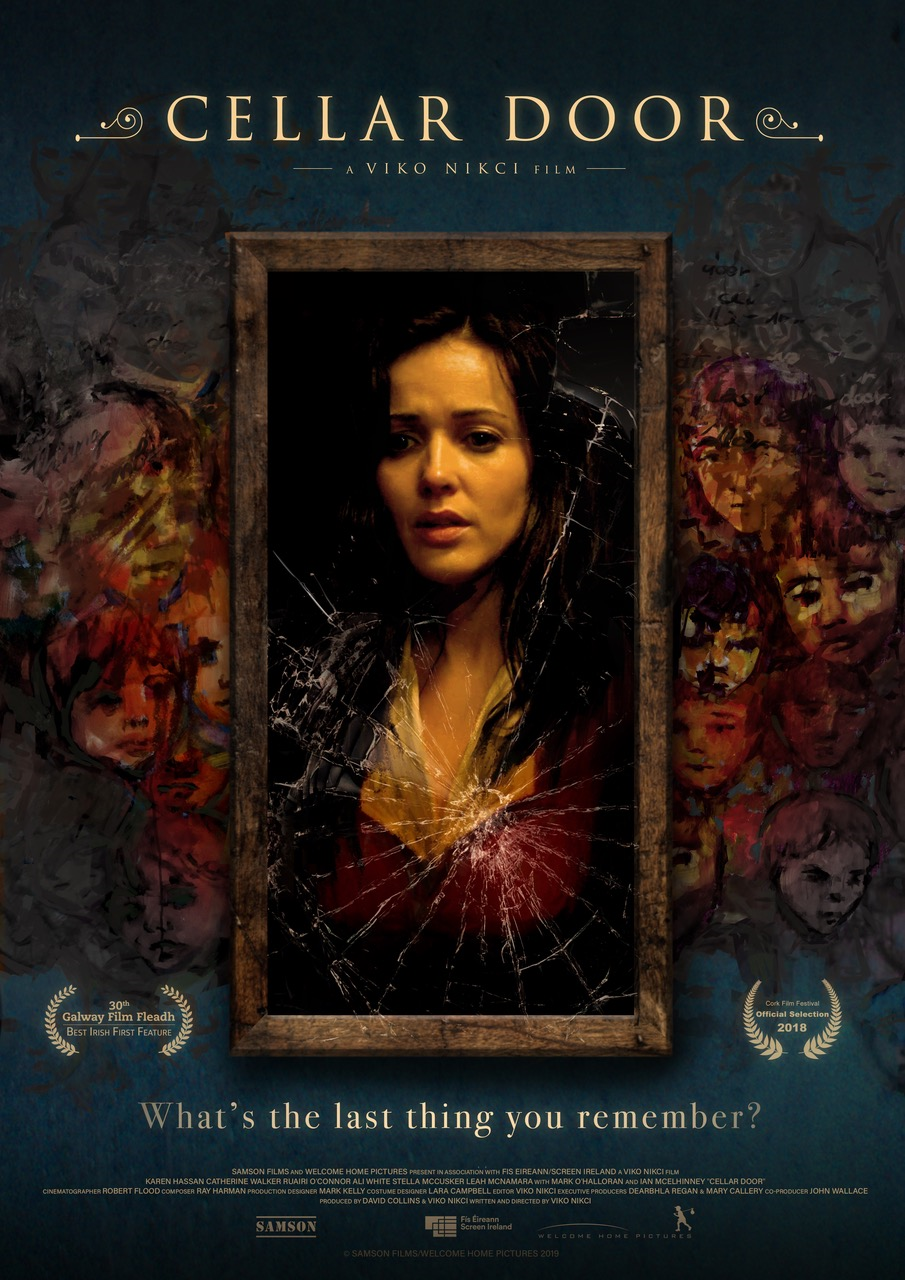