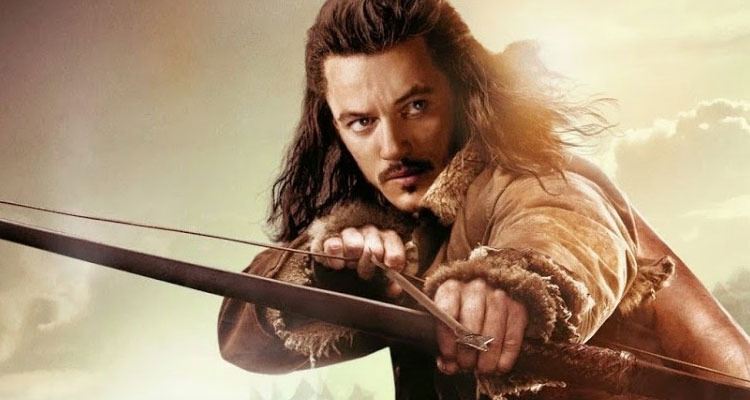 Interview – Luke Evans for THE HOBBIT: THE BATTLE OF THE FIVE ARMIES

Luke Evans is having quite a year; not only has he signed onto the reboot of THE CROW, but he took on the role of the world’s most famous vampire in DRACULA UNTOLD, and this week he returns to our screens in THE HOBBIT: THE BATTLE OF THE FIVE ARMIES. Movies.ie sat down with the Welsh actor to chat about all things HOBBIT; how he feels now this franchise is coming to an end, and what the future holds…

How was it for you to come into such a massive project and establishing Bard as an authoritative character?
Luke Evans: A lot of it is in the script, obviously, but I wasn’t worried about gaining the same stature or presence as Gandalf or whoever, I was just telling Bard’s story. That wasn’t really my agenda; my agenda was just to tell a human story, of a man fighting for his family. I don’t think he gives a damn about anyone else in the film, he just wants to look after his kids. My main job was just to tell a human story; it’s incredibly powerful, what he does. I think he’s great, I love Bard; the unlikely hero.

What was it like to work with the child actors, and having their dad – James Nesbitt – on set?
LE: Great. Jimmy is one of my very good friends; Peggy [Nesbitt] and Mary [Nesbitt] are wonderful girls and John Bell is a great little actor. They play a huge role in my performance. My scenes with them were super real; they lived every moment and made my job of protecting them very easy. They had really done their work. On top of all of that, they had to learn a Welsh accent, which is none of their natural dialects, so they had a lot to do, and they did it with style and totally professionalism. We had fun while we were doing it, and sometimes the fun bit was to have Jimmy in the scene with his girls and me at the same time. It must have been very weird for them, but it was very funny for me.

What was it like to work with Peter Jackson?
LE: He loves film and he loves directing; it was what he was born to do. Watching him on a film set is quite fascinating because he’s pulling all the strings on different sets, and he is watching everything in his tent; it’s like a little mothership of TV screens. It’s a fascinating process and he handles it with such calm and ease that he makes it look very easy and anyone that knows the film and how complicated it was to put together knows that none of that is easy, but he does it with style.

What do you feel THE HOBBIT franchise has given you, as an actor?
LE: A lot of things, professionally it opened a lot of doors, it was a huge moment for me. It was 3 years ago that I was given the role, and up until that point I had done a few big movies, but I was still making a name for myself, so for Peter and Fran to choose – out of all those thousands of people they saw audition for Bard – to choose me was extremely lucky. I am sure they weren’t thinking about what it was going to do for my career, but I was thinking ‘This is a big moment, and a lot of people are going to see my play this role’. It was a big moment. Apart from the professional side, I gained a lot of really good friends, and memories of a country that I might never have visited, or never would have experienced the way that I did when I was shooting the film… That bucket list was long, and I ticked a lot of things on that list.

Did you get to take any props from THE HOBBIT set?
LE: I took a couple of Dwarvish coins, before they put a sign up telling us not to take the Dwarvish coins [laughs]. They are rusting away in a box; they rusted very quickly. My sword is what I was given officially by Peter on my final day, which is the sword I use in the third movie. It’s beautiful; it’s on my wall with my Dracula sword and my Aramis sword [laughs]

We get the feeling that the cast and crew of THE HOBBIT became like a family on set. Do you miss them?
LE: I started missing them a few days after I left, you miss the people and you miss the country; you miss Peter [Jackson] and you miss the incorporative energy they have; they bring you in and you feel like you’re part of the journey with them. I started missing it two years ago, but I think once the final chapter is up and running and we can watch it on the screen, I think that will be a very sad moment. Bittersweet, because I have been waiting a long time to see Bard’s big moments, but it is the final chapter of a very long experience for everyone involved, especially Peter. It’s a big farewell to Middle Earth. It’s exciting but sad at the same time.

Talking of the premiere, do you enjoy watching yourself on screen?
LE: I don’t mind it. Sometimes it’s easier than other times. Watching DRACULA UNTOLD for the first time was nerve wracking; it was my first lead role – I am in almost every scene in the film and it’s all about my journey so it was quite overwhelming – but I enjoyed the film, I enjoyed the story, I felt like I was on the journey with the character very quickly. There were moments where I looked at myself and went ‘Eugh’, but that’s life, if you don’t think those things then you love yourself a bit too much. I always notice cracks and flaws and the things I could have done better, but I can enjoy it, and I think that might be to do with the fact that my training came from theatre, so for 10 years I never saw what other people saw. I remember the first time I got to watch playback on a monitor after I had done a take, and it was the most bizarre thing to see myself and what I look like when I am acting. I still find that quite weird, but novel.

We were on the set for DRACULA UNTOLD with you in Belfast, and it was raining and muddy; was it a culture shock going from filming THE HOBBIT in New Zealand, to filming DRACULA UNTOLD in Belfast?
LE: No… I mean, the size of the base camp was a bit smaller because there were less people, but the size of the film didn’t feel hugely different. It didn’t feel much different, but then I am a jobbing actor; I attempt to go from one film to the next and you just immerse yourself in whatever you are surrounded by. On DRACULA UNTOLD I was in the crazy armour, but I was in the thick of it. I was already training for DRACULA UNTOLD when I was in New Zealand doing the pickups for THE HOBBIT. I had a trainer come with me to train… I don’t know how I did it! It put me in good stead when I got to Belfast because the training carried on, and it was all day, not just after a shoot.

You have played quite a lot of period action roles on screen, was that something you sought out?
LE: I don’t go looking for period films; they might come looking for me. If you have done a successful period action movie and you do well in the role; sword fighting and riding a horse then I know I am on the list of people that they go to. I am not the only person on that list, I’ll tell you that for nothing, but it seems to have worked that way for the last few years. It’s fine because I then jumped into FAST & FURIOUS 6 and played a very contemporary bad guy, which I had a lot of fun doing. It’s about the role, it’s about the story, it’s about the filmmaker and it’s about whether the character is something that people haven’t seen me do. In the two films I have coming out in the space of two months, both roles are completely different to one another, so that’s where my choices were made because of the roles and the story that I was going to tell. I think maybe my next film – if THE CROW doesn’t start up when it’s supposed to – may be a little more romantic or a comedy… Who knows?

You are having such a good year; are there any dream roles you would love to play?
LE: I don’t know, I like the challenge of something new, something I haven’t played before, but what that embodies, I couldn’t tell you. If you had asked me two years ago about Dracula, I would have been like ‘Don’t be so ridiculous I would never play Dracula, I am too young to play Dracula’, and then that film came along and I realised it was a younger version and I could do that, but I hadn’t thought about it. I just think more of the character, the personality of the character and something I haven’t done very much of – or even at all – and then see if that comes along in a script. That’s what I am always looking out for; the new role I haven’t done, or the story that no-one’s told, or a director I have never worked with.

THE HOBBIT: THE BATTLE OF THE FIVE ARMIES is released in Irish cinemas on December 12th 2014