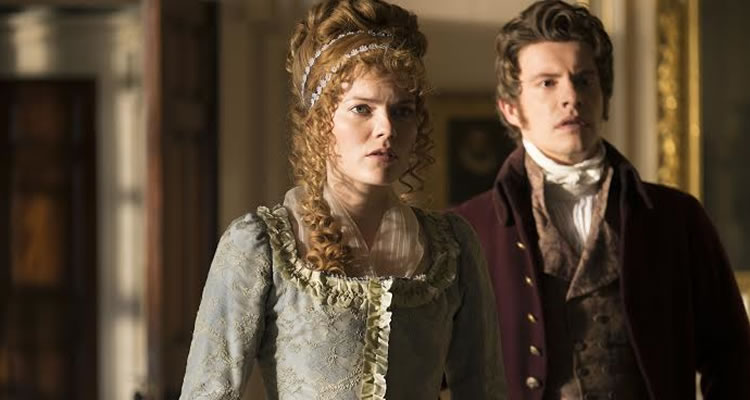 For reasons I can’t quite fathom, I’ve ended up having a few drinks with Whit Stillman on three different occasions. Which may not sound like a lot, but then, this is a filmmaker who’s only made five films over 26 years, and who spends most of his time in New York. Where I don’t get to pop out for a drink all that often.

It goes without saying that Whit Stillman makes for a fine drinking companion – witty, self-deprecating, charming, intelligent, and all those good things you want to get drunk with. What makes our drinking sessions surprising is that, well, I’ve never quite been able to love Whit Stillman’s films as much as I want to.

Those early breakthrough outings, ‘Metropolitan’ (1990) and ‘Barcelona’ (1994), just seemed too precious, too affected. Even the hip-swivellin’ 1998 would-be commercial breakthrough ‘The Last Days Of Disco’ fell short on just about every front.

Stillman’s brain was in the right place, but his heart didn’t seem to make it up there onto the big screen. When the mumblecore scene finally gave him a road back into filmmaking in 2011, ‘Damsels In Distress’ came with that movement’s screen queen, Greta Gerwig, in the lead role in a college drama that was ultimately Heathers without the headers. Or ‘Clueless’ without a clue. Or was it ‘Mean Girls’ without the mean? Suffice to say, I wasn’t crazy about that one either.

Our last drink together was some Jameson at the 2011 Dublin Film Festival. It was Whit’s last interview of the day for ‘Damsels’, and he wanted to unwind. He was about to shoot his next film, an adaptation of a lesser-known Jane Austin novella, here in sunny Ireland.

At least, sunny was the plan. When the New York filmmaker was shown around potential locations for ‘Love & Friendshi’p, it was June and July. The shoot was always going to be in February though.

“The Irish Film Board are clearly very clever people,” smiles Stillman. “Ireland is a beautiful place to shoot, but, in February, everyone is walking around in heavy coats. All the time. I have shots from the ‘Love & Friendship’ set, and it looks like an expedition to the Artic.
“So, yeah, those film location visits – that was a blatant case of false advertising.”

Still, my expectations weren’t high when I headed off to see ‘Love & Friendship’, an adaptation of Jane Austen’s ‘Lady Susan’. Stillman had always promised far more than he delivered, and besides, with his old Last Days Of Disco buddies Kate Beckinsale and Chloe Sevigny being front and central on the posters again, I had a feeling that we were about to get more of the same. Only older, and more tired.

It was something close to a revelation to find myself chuckling almost constantly after an initially stilted opening, ‘Love & Friendship’ being full of the sort of wicked parlour room humour that you’d normally expect from an Oscar Wilde play. Or a Marx Brothers vaudeville routine.

Plotwise, it’s 1790s London is a tough one, and widowed temptress Lady Susan (Kate Beckinsale) is on the hunt for a wealthy husband. And she’s got a very distinct advantage when it comes to love and marriage – namely, a fine body and a complete lack of scruples or decency. It’s evident in her long-suffering daughter, Frederica (Morfydd Clark), kicked out of boarding school for both running away once too often and because her mother refuses to pay the school fees. Forcing herself upon the happy home of her late husband’s brother, Charles Vernon (Justin Edwards), Lady Susan is soon giving the latter’s impressionable young brother-in-law, Reginald DeCourcy (James Fleet), a bloodrush or two – much to the distress of his sister, Catherine (Emma Greenwell), the lady of the house. Helping Lady Susan in her cunning plans to marry into money is her old friend Alicia Johnson (Chloe Sevigny), even if the latter’s older husband (Stephen Fry) insists that his wife never mix with this terrible influence. With the bumbling Sir James Martin (Tom Bennett) presenting himself as a suitor for a horrified Frederica, Lady Susan knows she’s got her work cut out for her if she is to secure herself a comfortable future…

Given that you’d worked with Kate and Chloe before, on ‘The Last Days Of Disco’, was it a given from the start that they’d be the girls on the posters again here?
Whit Stillman: Actually, early on, I had Kate in my mind as Lady Susan Vernon, rather than Lady Susan. This was back when Kate was a teenager though – just a few years after Disco – so, I just wouldn’t see her as this older woman. Having gone all through all these different financiers and their idea of what would work at the box-office, I finally came around to Kate again, now at the perfect age to play a wicked widow.

Always a smart move, adapting a source material that’s not that well known…
WS: That’s the trick. Normally, when it’s not well known and no one’s used it, that means it’s probably not that good. But, in this case, it was just the struggle people had in adapting it to the screen. I’ve been thinking about this for about a dozen years. It was a vacation project, something I worked on for fun. It was all positive and cheerful, and I think that comes across in the film too.

With Lady Susan, she isn’t so much a Countess as a Cuntess…
WS: Oh, that’s good, but you’re going to get that out of my mouth.

Is it tough when you’re lead character is despicable and yet, you want people to be compelled…?
WS: I think a lot of people would have been put off by Lady Susan on the page. In fact, back in 2013, I showed it to the woman who is now looking after the English distribution for the film, and she just didn’t like her at all. Dismissed her as evil, and totally unlikeable. She finally came around, becoming the top bidder for the UK. So, I think it’s all down to the performances, taking the sting out of these characters by making them fun to watch.

And it’s good to know that there were Kim Kardashians back in the 18th century too…
WS: I don’t want to talk about that woman in one of my interviews…

Did you sense that early on, that ‘Love & Friendship’ was going to be so well received. Or do you fret about these things right up to those early reviews?
WS: I fret about everything, all the time. It’s part of the job. There was a point in the editing where I felt it was working. Usually, it’s not the greatest feeling, showing your unfinished film to friends and acquaintances. But this film was always charmed. It played pretty well from the very start…

Tom Bennett as the buffoonish Sir James Martin almost steals the show here though. Complete comic explosion every time he waddles into view.
WS: It’s good that Kate’s character is so dominant, and so strong. Otherwise, absolutely, Tom’s character could have taken over. I want to see his other work now – got to find other work for him. It was an incredibly fun shoot, even when we’re all wearing our overcoats and trying to stay warm.

There’s about 3,237 production companies involved here, from all over the globe. Tough?
WS: Very tough. We actually ran out of money as we were shooting, doing deals right up to the end. My ‘Metropolitan’ investors in the States were shipping money over so we could keep the cameras rolling whilst we waited for the European money to come through. Everyone will get well-rewarded for bailing us out though, as there will be a profit.

Given that you spent many years out in the wilderness, do you find yourself having to think about the commercial potential more and more now…?
WS: I think if you’re doing anything outside of a super-low budget film, you have to have a name. Luckily, I know a few names, but it’s a shame that there are so many barriers to new filmmakers. On a larger cast, someone like Tom Bennett can break out, but, it’s tough for people starting out…

It’s incredible to think that, despite the acclaim, you’ve only got five feature films under your belt, after 26 years…
WS: I consider ‘The Cosmopolitans’ pilot in 2014 as a film too – so, that’s six. That sounds better. Still, to be honest, I’m pretty amazed that I’ve made five feature films. Making just one felt like an achievement. But I feel I’ve turned a corner now. Now it’s my turn to mess it up completely. I’ve got the novel of ‘Love & Friendship’ out quicker. With ‘The Last Days Of Disco’, it took me two years to get the novel out. So, all the momentum was gone. This time, the novel is out at the same time as the film.
Did you know about the novel here? Crazy, really. A publisher phoned me up about doing a novel for ‘Love & Friendship’, but it goes way beyond the film’s script, and has all kinds of material. It’s called ‘Love & Friendship: In Which Jane Austen’s Lady Susan Is Entirely Vindicated’. The idea being that her nephew writes this memoir in defence of his beloved Aunt Susan. So, it turns the Jane Austen novel up on its head, and that was a lot of fun.

A bit like putting a new Beatles song together – daunting, no? Austen fans can be very tough.
WS: What reassured me was my love for Austen. You know that insincere line in Hollywood from every agent – “Hey, I’m your number one fan!”? Well, in this case, it’s true. I think I am Jane Austen’s number one fan. I love her work. And the first thing I read of hers, I didn’t like. So, I felt that I wanted to do Jane Austen justice, and it’s gotten a great response from those Austenites. And the film critics loved it too.
I really think I should retire now. I’m probably never going to get it this good ever again…