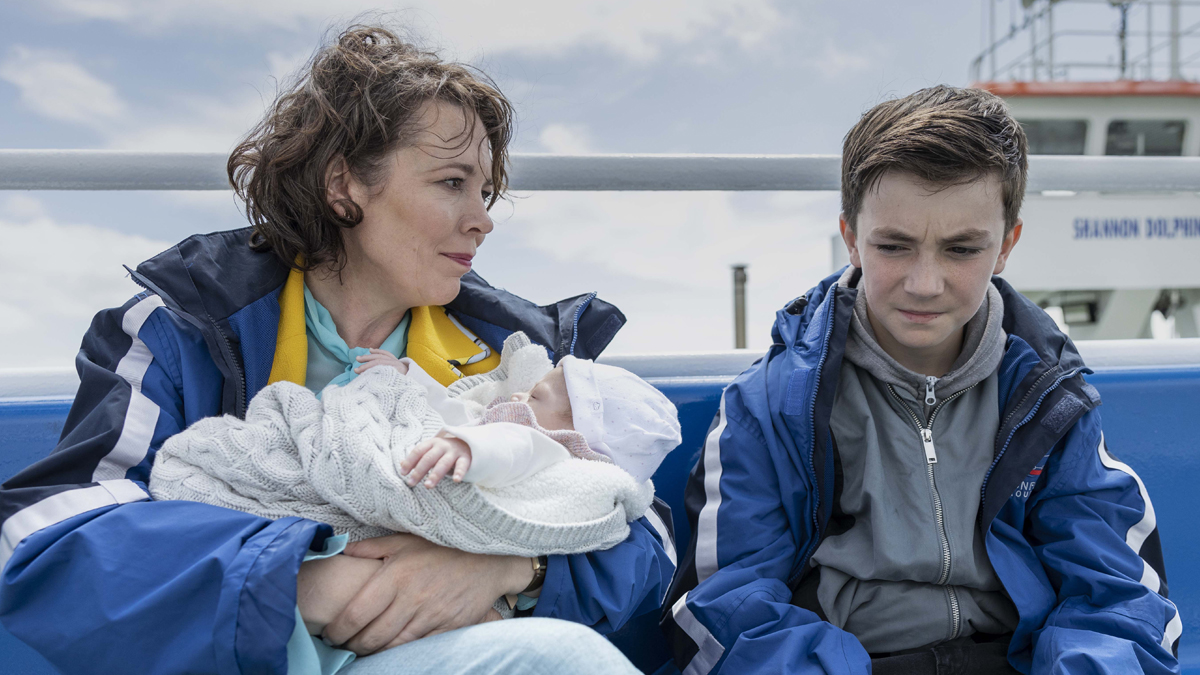 Cara O’Doherty talks to Irish director Emer Reynolds about her new movie, which stars Olivia Colman as Joy, a solicitor, who finds herself & her baby hijacked in a taxi by a 12 year old boy. The unlikely pair go on a journey across Ireland, gradually finding the friendship & love they never knew they needed.

Was it daunting to have Olivia Colman, such a great actor, signing on to your first feature, or did you feel like you were in safe hands? And how did the casting process go?

She was the only name on our list for the character of Joy. She was Joy as far as we were concerned. Of course, you never think that will happen. We went to her agent, sent the script, I sent a letter, and Olivia loves the script. She loved that Joy is an incredible woman. She’s fiery, feisty, cranky, and independent. Joy is a vivid character, and Olivia took to her. She asked to meet with me and, incredibly, agreed to play the role. We were stunned and delighted in equal measure. Was it daunting? No, it wasn’t daunting. Olivia’s an incredible person. She’s exactly who you imagined she is when you see her on-screen. Olivia is incredibly warm, personable, funny, and relatable. She is very human, and the type of person who will come in and talk to the crew and cast and be a collaborator, and that was clear to me from the first zoom call. I knew we were in safe hands and felt she would bring the Joy on the page to glorious life. Olivia is what the script needed because Joy is the heart and soul of the script, along with her partner in crime, Mully.

You have an established actor and then the opposite end of the spectrum, a newcomer playing Mully. Where did you find Charlie Reid?

We did a big call out across the airwaves on radios, schools, and drama schools. We were looking for a new find, either a young established actor or a young boy that had never done this before. About 1500 young boys applied, and it was a massive process of self-tapes and whittling down, and Charlie emerged out of that. It was a four-month process to find him. Charlie was one of the lead runners from very early on. He has incredible natural charisma. He is a confident, cocky young boy in the nicest way. He believes in himself, like Mully. We loved him from the start, but we kept whittling away to be certain. I feel so honoured to have cast him because he’s an incredible natural talent, and I hope this is the start of an incredible journey for him.

How complicated were filming scenes with the baby?

The baby was, in fact, twins, and the baby’s mother was breastfeeding, so we had a lovely family atmosphere on set. Both babies were incredible little talents. When you’re shooting with newborn babies, you can’t control them, so we worked around their natural schedule. When we knew we wanted to have him feed, sleep, or cry, we tried to schedule it around their daily life.

Did you have time to rehearse to get Charlie used to the process?

We rehearsed for a few days with Olivia, Charlie, and Lochlann Ó Mearáin, who plays Charlie’s dad. We had scheduled about a week of rehearsals but realised we didn’t need all of that. We needed Charlie as a new young actor to be comfortable opposite an Oscar-winning actor. We ran several scenes; we hashed out a few things over two or three days. There are a couple of fights and a couple of big things for Charlie, but he overachieved. He’s an incredibly brave young man. He took to it like a duck to water. It was evident during the rehearsals that he would benefit from getting out into the Wilds of Kerry with the camera, letting the instinctive magic unfurl that Charlie and Olivia have together.

Lochlann Ó Mearáin has done some great work, but he isn’t a household name yet. Do you think Joyride will change that?

Every day he was on set, I’d find myself thinking he is handsome, talented, and incredibly funny. I kept thinking, why is he not a big star? In a way, I was thanking my lucky stars that he wasn’t a bigger star and that we were fortunate enough to have him. I think he will cause a stir now. He’s such a rogue in the film. He’s a bad father. He’s causing all these difficulties for his beautiful young son, and Lochlann brings complexity and humanity to what could have been just a dark character.

The county of Kerry is very much a character in the film. The film’s screenwriter Ailbhe Keogan is from Kerry and very much fought to have the film made there. Were you keen to have it filmed there too?

Yes, we were all fighting to have it in Kerry. It would have been easier or cheaper to shoot it in Dublin and Wicklow, a normal model, but we wanted it to be shot in Kerry. The landscape, Kerry people and even Kerry mist are all in the film’s DNA. It mattered to us that we would feel the madness and mythology everyone feels when they go to Kerry. There is something in the air. We fought extremely hard, and Screen Kerry was incredibly supportive. I am so grateful and glad; Kerry is an incredible character in the film. It’s underrepresented in Irish films. It’s gorgeous and wild, which suits this strange, magical fable of these two characters driving to an unknown destination.

No matter how many Oscars you win, the Irish accent is hard to master. Did Olivia have a dialect coach?

Olivia is an incredible, skillful actor with accents and was determined not only to do it but to do it brilliantly. She did have a voice coach, but Olivia didn’t need help. She has an incredible ear for sound. She worked incredibly hard; I think her accent is beautiful. She has Irish ancestors on her mother’s side, so maybe it is in her blood.

Your previous work as a director has all been documentary, was there anything that you find challenging in a narrative feature or were there similarities?

I didn’t find it too different or too much of a jump partly because before I was a director, I was an editor for a long time. As an editor, I cut many feature films, so I am very familiar with the form and have been on many sets. When I directed my feature documentary, I was challenged and interested to see if the jump to feature drama would be big, but I didn’t find it that way. In many ways, you have the same conversations with your designer, cinematographer, and the rest of the crew. You are having the same conversations about what makes the film fly, what makes it real. The biggest change is working with actors instead of contributors in a documentary, but even at that, I found it similar because it seemed to me, you’re looking for the same thing. You’re looking for authenticity; you’re looking for engagement; you’re looking for truth. You can see if something feels wrong or feels false or forced. I dealt with my wonderful crew and cast the way I would have with my wonderful documentary crews with honesty, engagement and listening. We spoke a lot about the shared ambition we have for the film.

Do you think years as an editor have given you a unique perspective?

Hugely, those years as an editor helped me in all my directing to have the confidence when I see something that I know I’ve either got it or I’ve had enough pieces of it in multiple takes. I’m able to see a bigger picture. If I were a first-time director without all that history, I’d have been watching and thinking, do I need more? I have a lot of confidence that the edits will paint it in a fuller way rather than just individual shots. Editors are at the heart of the whole film. Photographers come in, do the prep, do the shoot and then are gone. The editor is there through the shoot, the music, the whole thing. Everything that needs to be figured out is on display for an editor. I learned by being in the room with incredible directors.

Both of your feature documentaries are visually beautiful, and aesthetic is becoming your trademark; tell me about creating the look of Joyride?

I’m very attracted to aesthetic beauty. I’m trying to create these moments of truth and connection in this atmosphere of aesthetic beauty. Joyride is very beautiful; the cinematographer did an incredible job. We had to embrace the Kerry landscape and the weather. We wanted to put a stamp on it despite the ever-changing natural light and the weather. It’s all about the attitude you bring to it. Kathy Strachan designed this incredible costume for Joy that would stand out in the landscape. Our designer peppered Kerry with murals, so Kerry but with an attitude and mythical madness mixed in. We didn’t want social realism. We wanted it to have this feel-good magical fable equality colourful, very loud, a bit like Joy herself. We worked hard on the look to make it accessible, relatable, fun, and lively. The film has a lot of personality, which was important for me aesthetically, but also, Joy and Mully deserve that the film would also talk vividly with them.

What is it like to have Joyride’s premiere at the Galway Film Festival?

We are so honoured to be there. It’s such a brilliant festival, and to open it, we are over the moon; we are all going down and excited to celebrate together. It will be our first screening of the film; then it’s released later in the month, so it’s an incredible honour and an incredible adventure, and I can’t wait.

What can audiences expect from the film?

I would say it’s a big-hearted, wickedly funny story about these two mismatched oddballs who are flung together on this journey. Over the course of the film and various adventures, they find healing, hope, and things they didn’t know they needed. These two characters are both broken in their own way. They come together like all good cinema pairs; they are mismatched and argue but find the hope and healing they need. It’s a very complicated but cathartic journey. I hope that leaves the audience feeling the joy of friendship, hope and healing at the end.

JOYRIDE is at Irish cinemas from July 29th